The children woke up hungry at 4:30am complaining that they hadn’t had dinner. I plied them with an apple and sent them back to bed. They reemerged at 5:30am and we sat down to a breakfast of Croissants and fresh fruit which I’d bought the night before.

Whilst we were getting ready to go out the kids invented “Mum Bucks” ™ which they could earn by doing good deeds with an initial exchange rate of 1000 MB to 10 NZD. That later changed to 100 MB to 10 NZD and they diligently kept up earning their MB’s throughout the day both ending with 9 MB each.

We set off for the harbour around 8am and walked via Queen Street which was far more pleasent than the route we’d taken yesterday. Stopped for Coffee along the way - an obligatory flat white. 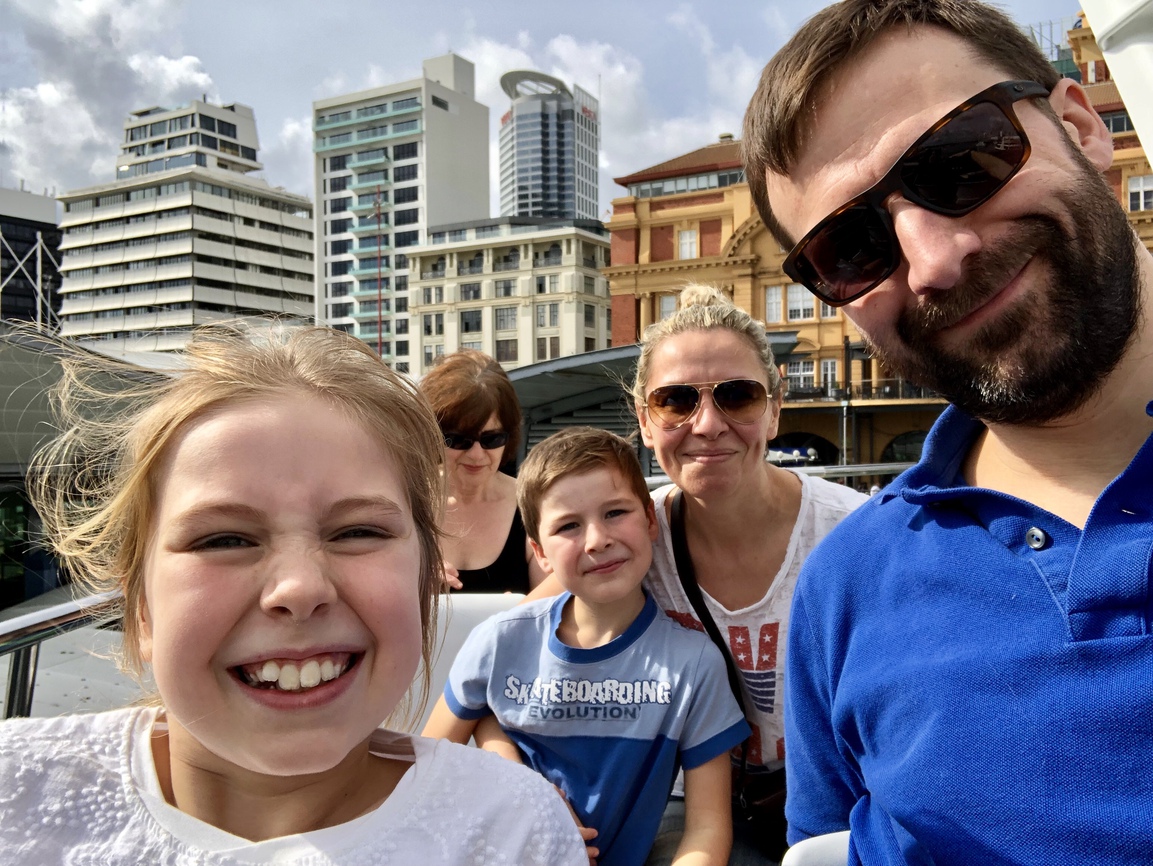 We bought a family ticket for the ferry to Devonport and sat on the top deck for the 15 minute ride across the harbour enjoying the stunning view.

After alighting the ferry we had a lovely stroll along the sea front, stopping for second  breakfast and a glass of NZ sparkling wine. Bella chose Fish and Chips (at 10am), which was delicious and we later learnt is a Devonport delicacy. 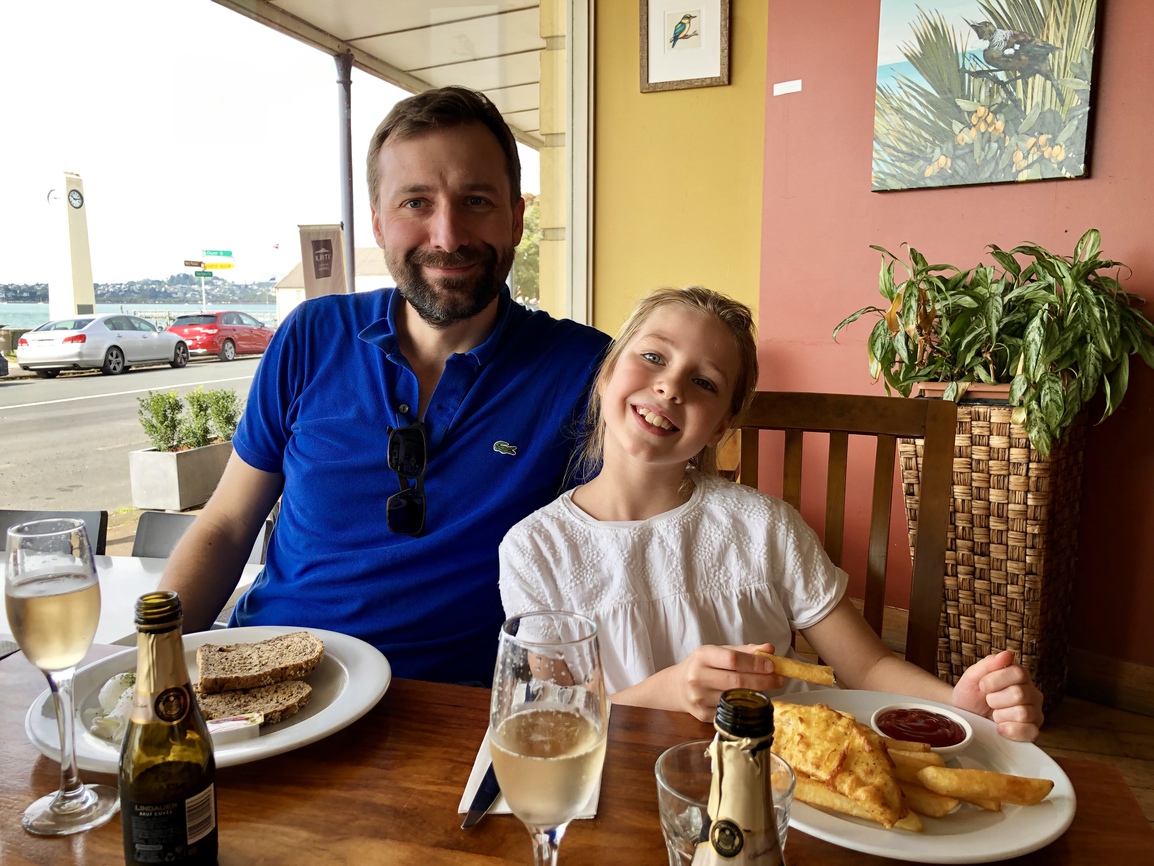 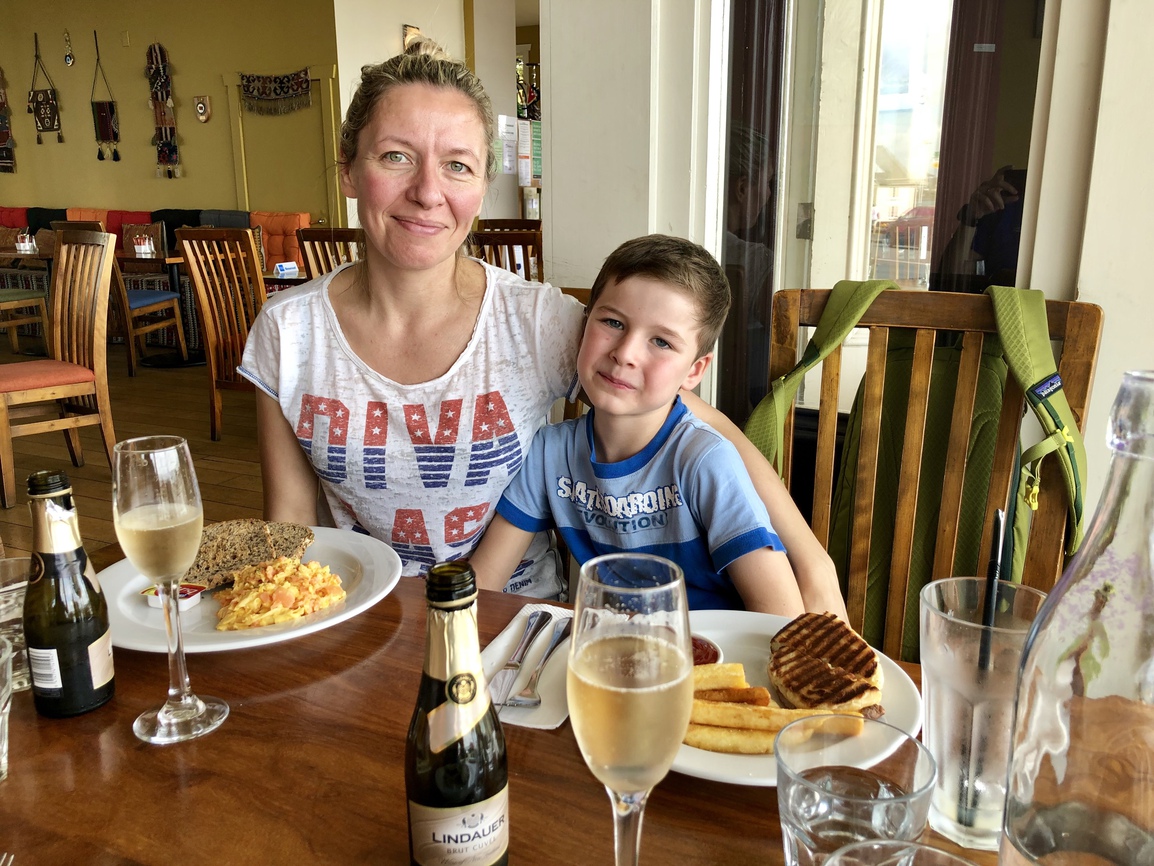 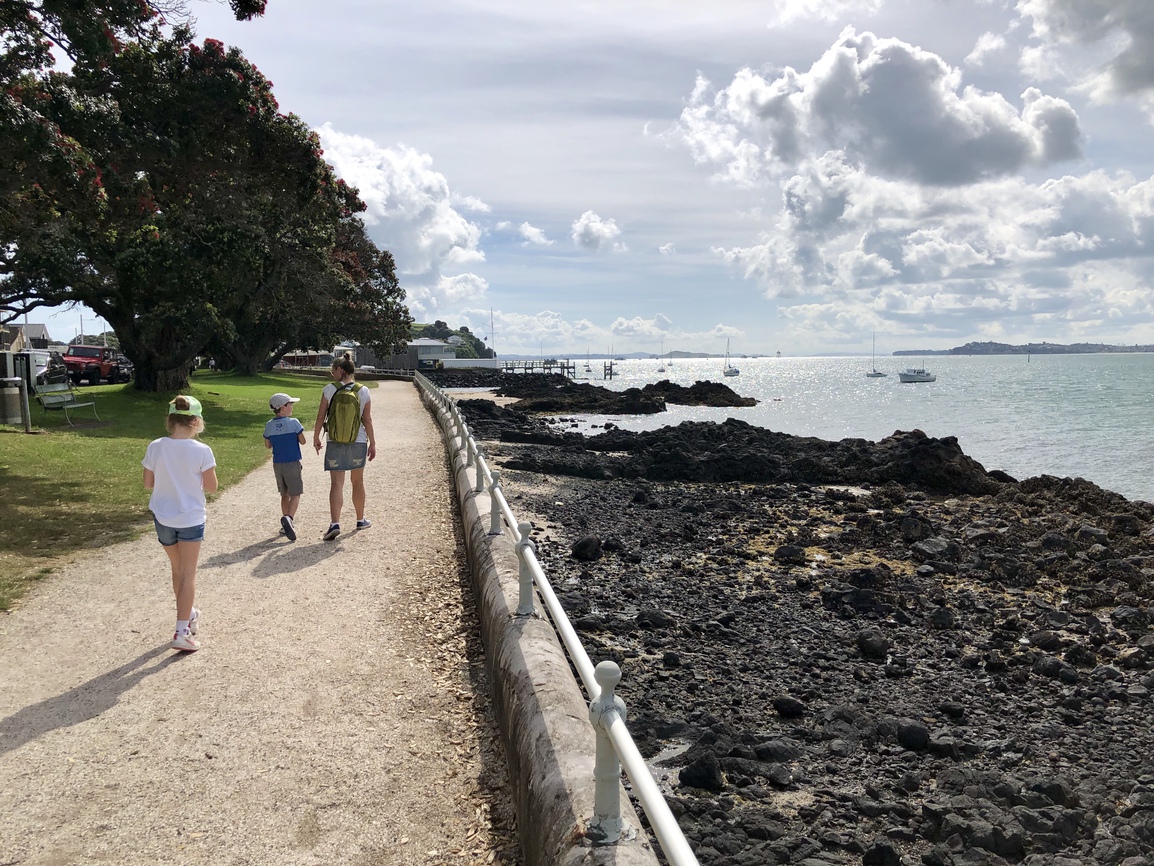 I enjoyed the beautiful victorian (maybe Edwardian?) villas along the sea front, reminiscent of San Francisco. Reaching the end of the sea front we scrambled up North Head and discovered the “disappearing” guns, which when fired the recoil returns them into their mountings making them disappear. There was only one gun left intact with the rest being sold for scrap at the end of WWII, regardless the Kids had great fun exploring the pitch black underground supply tunnels, popping out by the gun and shrieking in the dark. 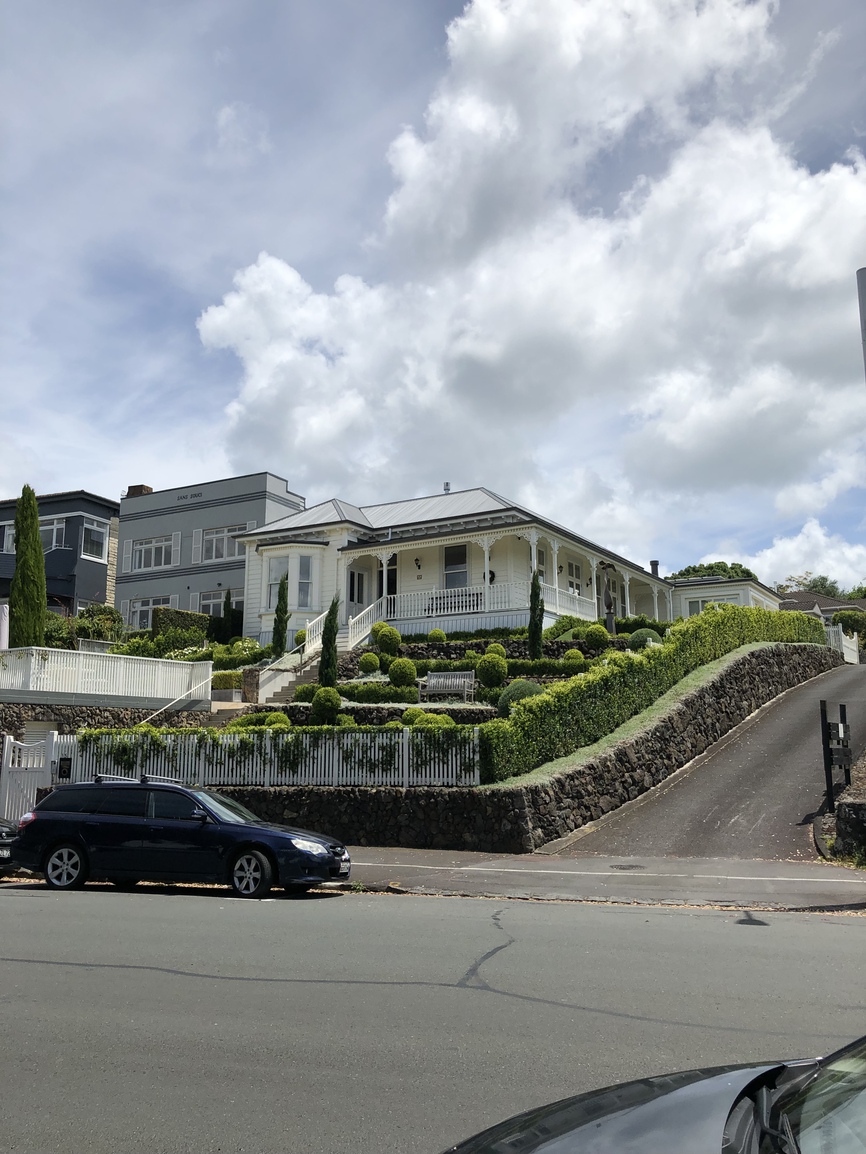 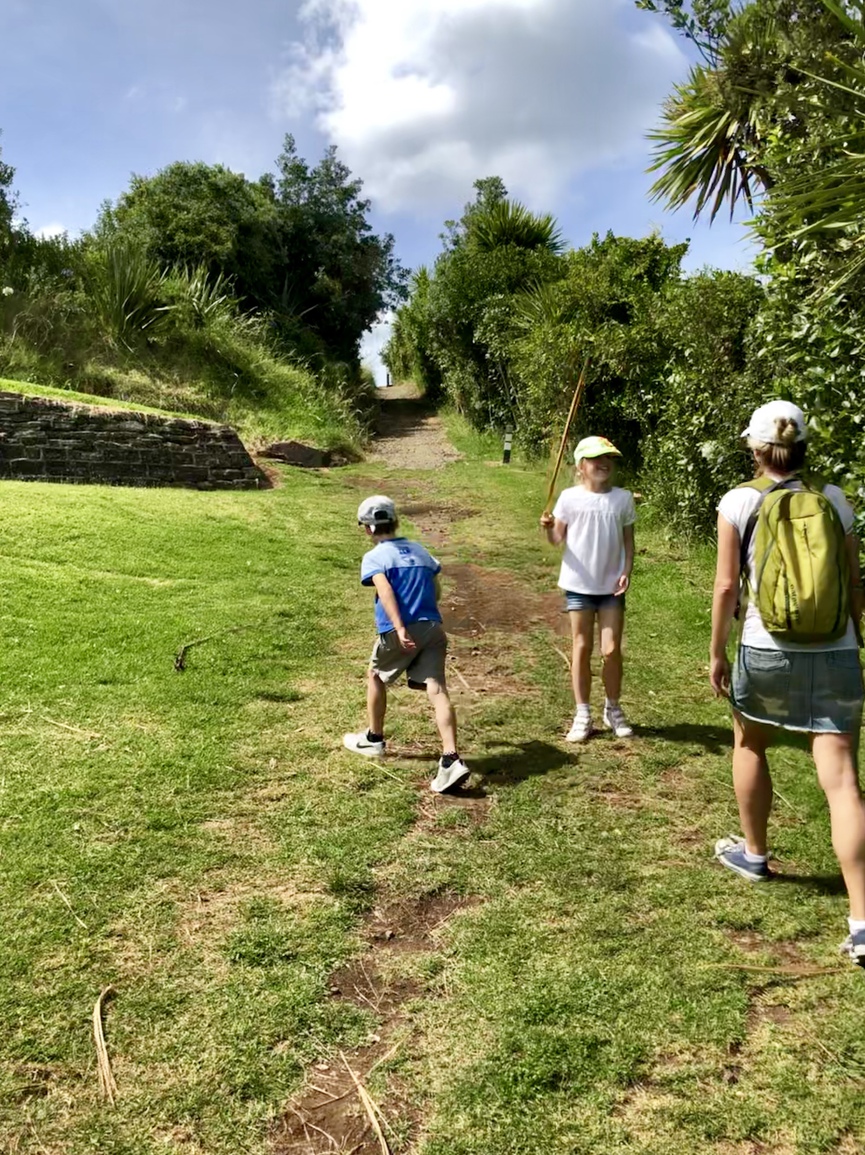 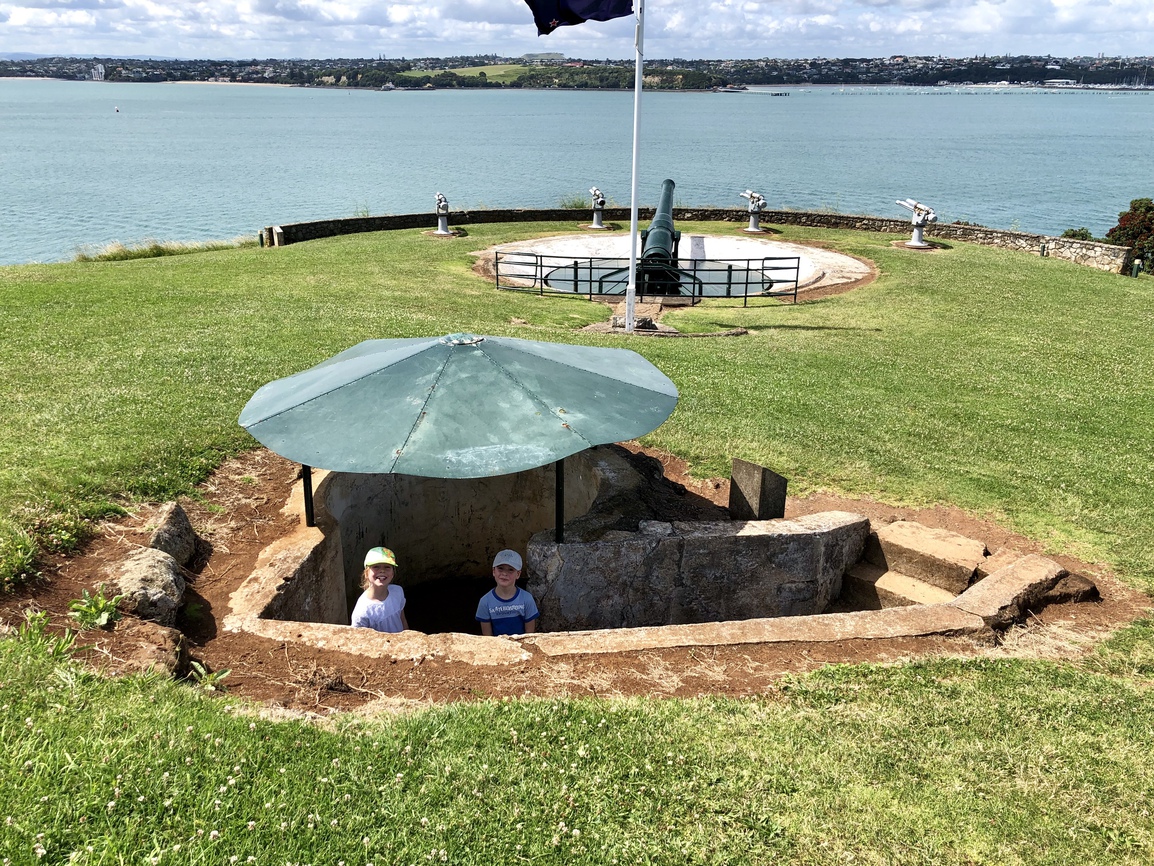 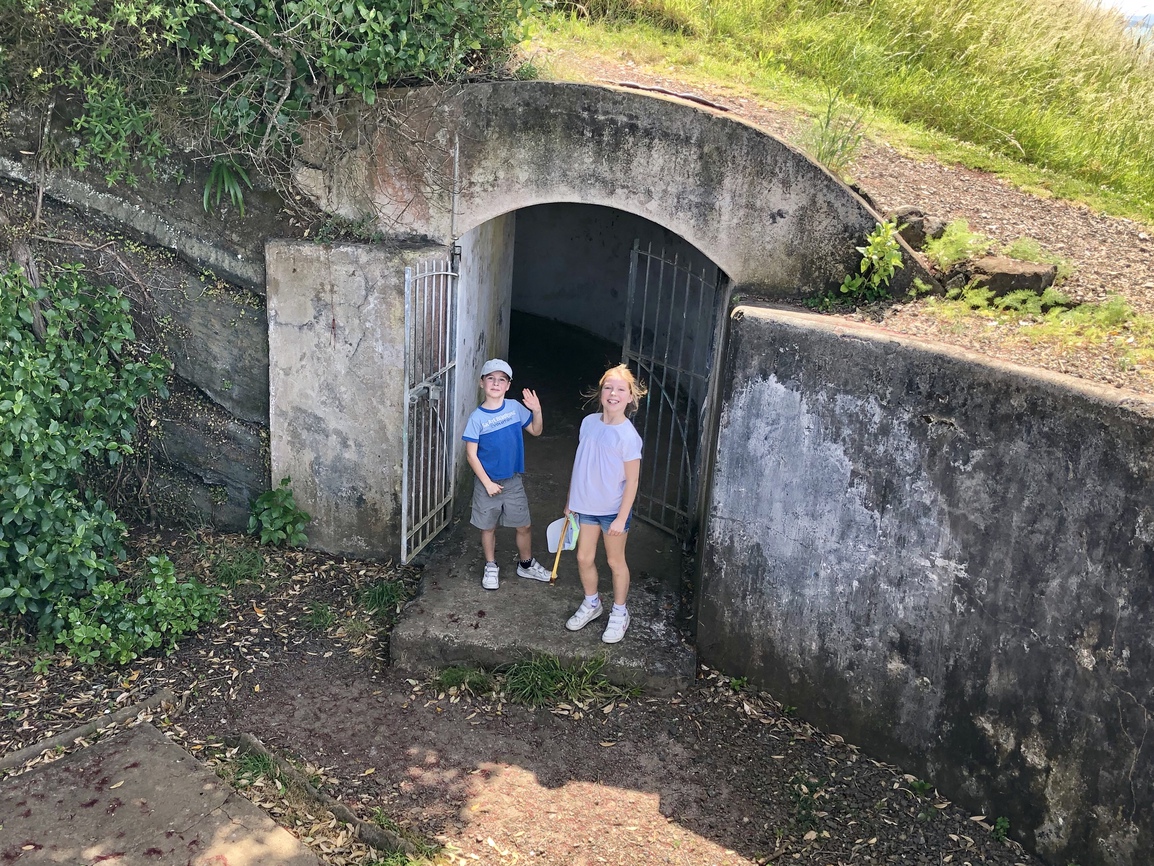 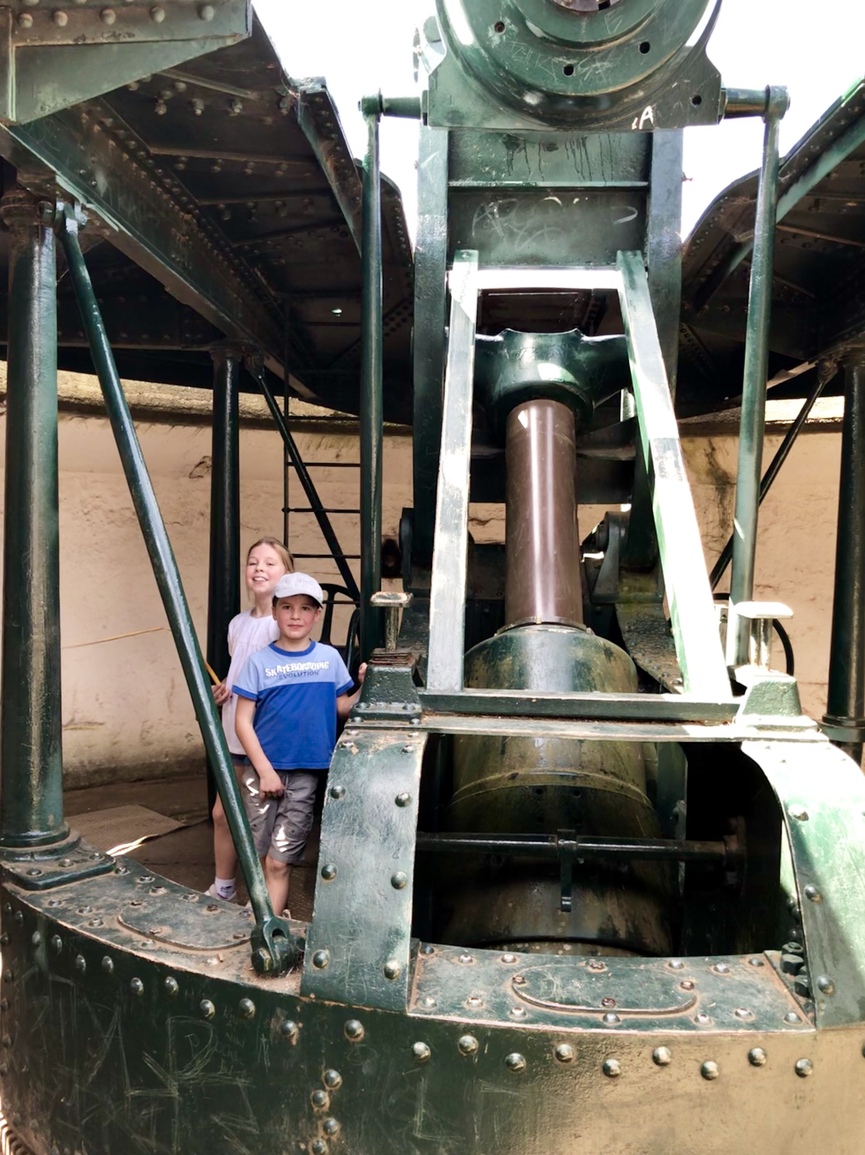 Finally we coaxed them out of the bunker and we again scrambled to the summit to take in the view and for photos discovering a few more gun placements on the way. 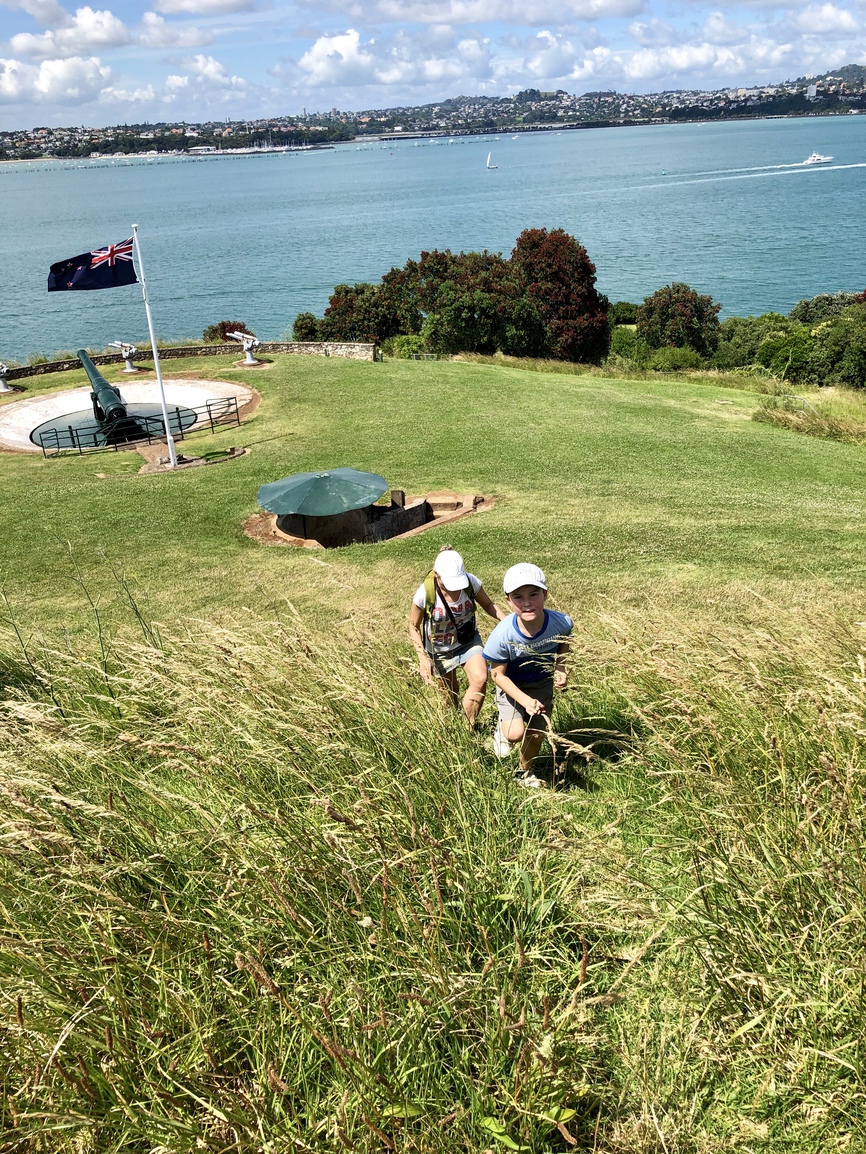 We headed back down the steps to Cheltenham beach - a beautiful stretch of sand bordered by more Victorian villas and almost deserted. The girls went for a paddle in the sea - going really far out before they found water deep enough to swim. (Giving Jurmala a run for its money in terms of shallow water.) While the girls swam, I built a sand castle with Alex as is time honoured tradition the minute we locate a beach. 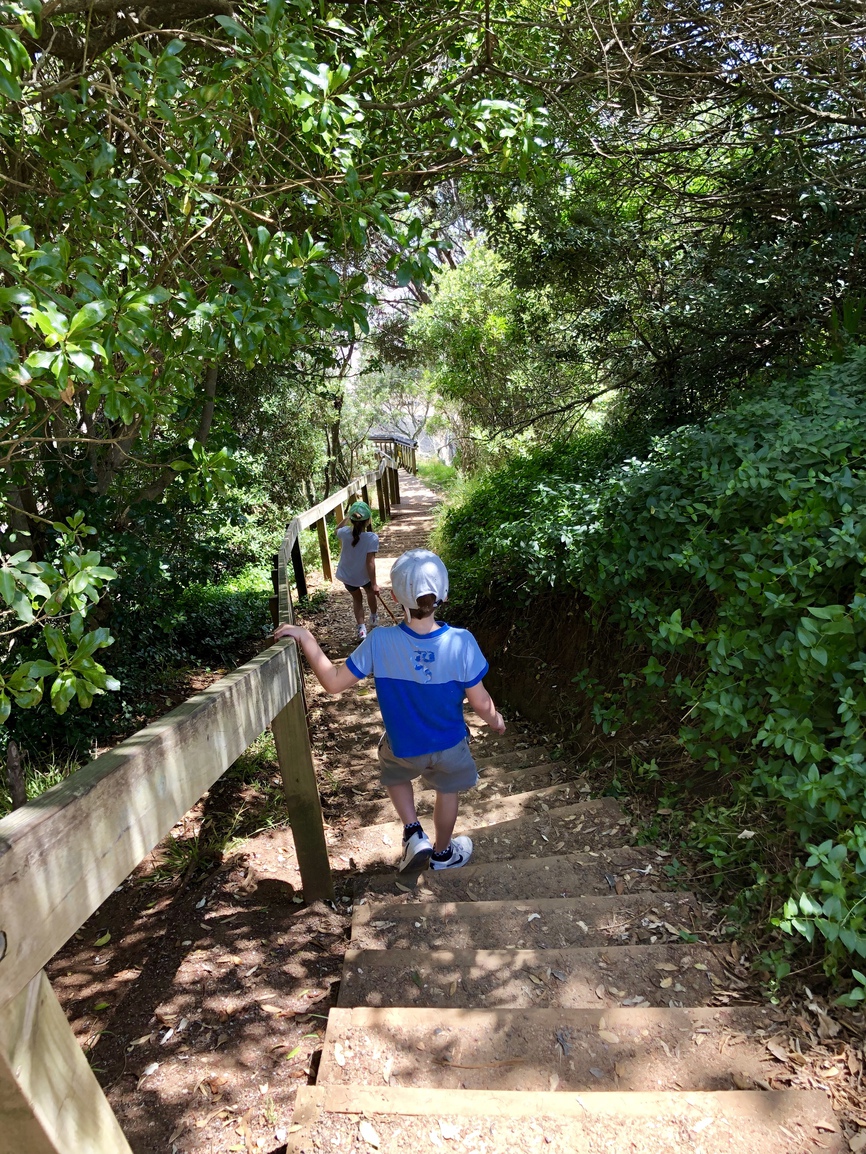 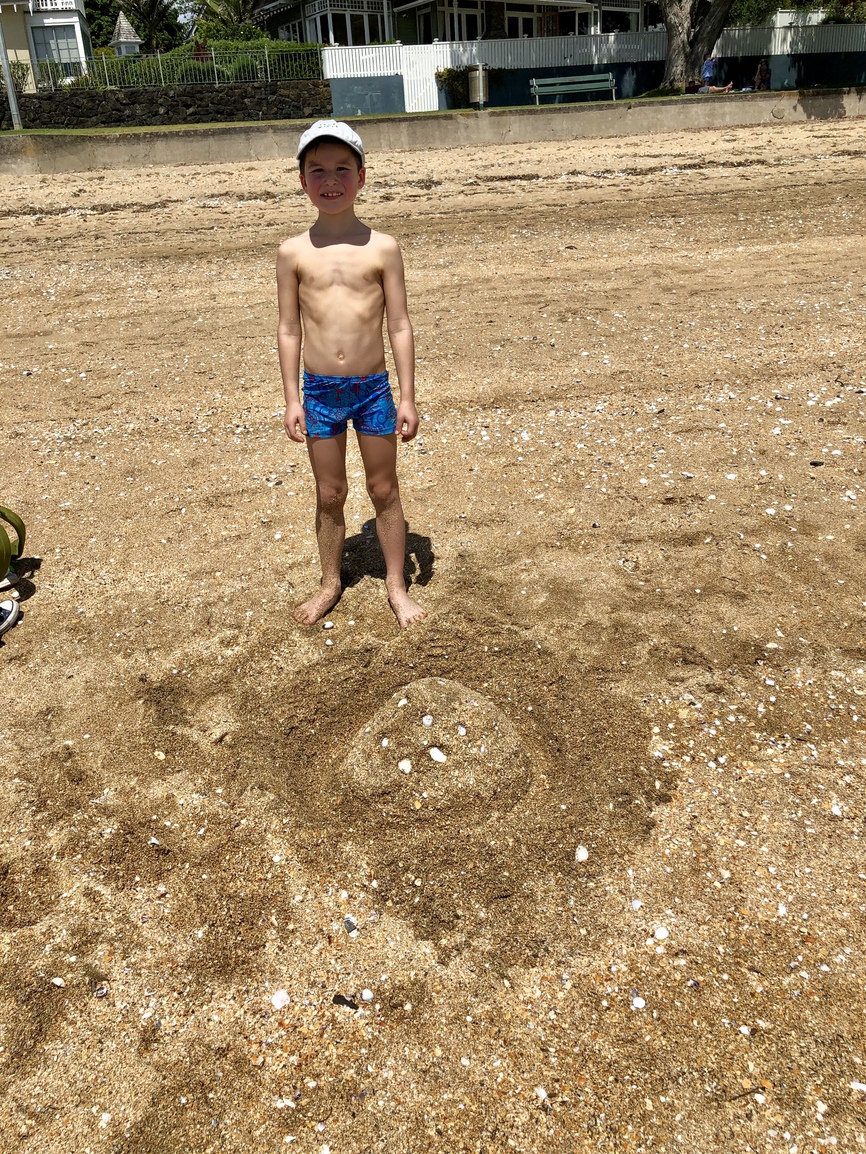 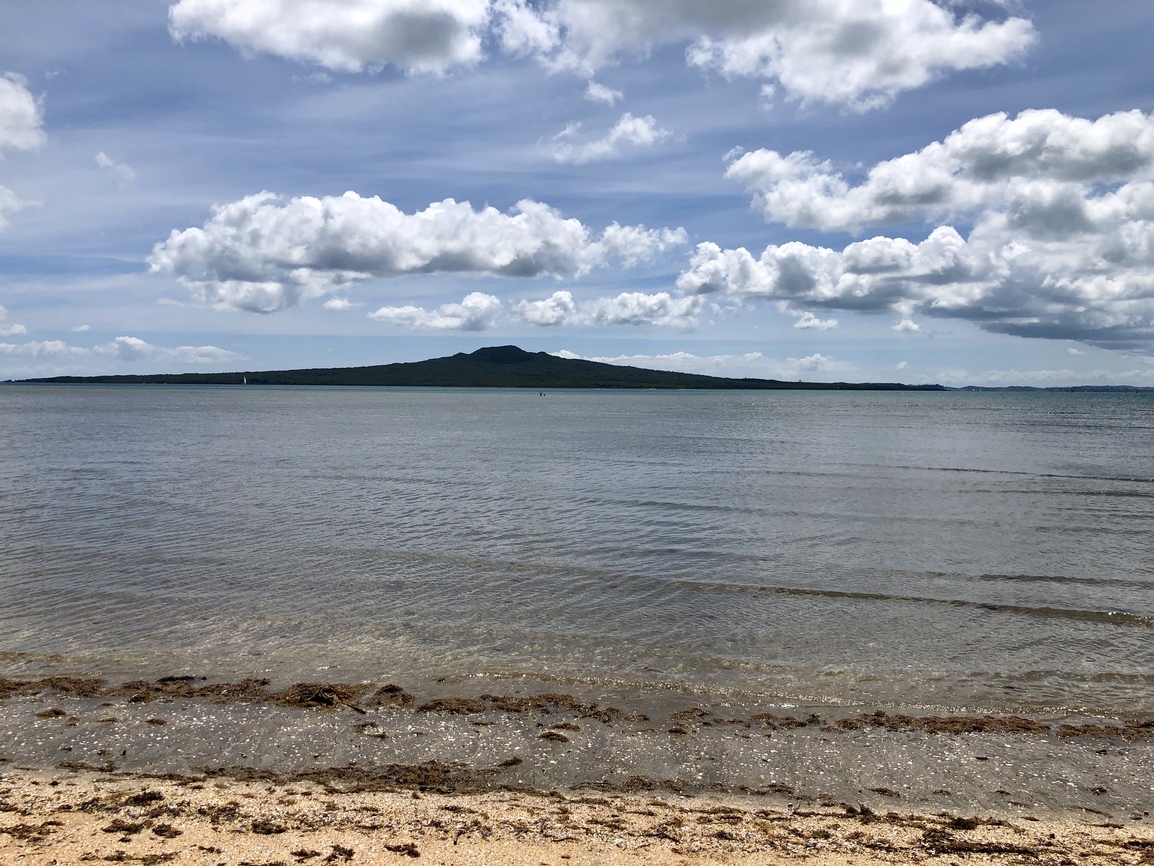 The girls are the tiny specks standing in the center of the picture!

The braved the hot sun for 45 mins (the few locals that were there were all in the shade) before walking back along the suburban streets towards Devonport ferry terminal stopping for our first ice cream of the holiday along the way.

The ferry was disembarking just as we arrived and we joined the end of the queue to head back to the city centre. The return ferry was almost completely covered, so no top deck views, but we did manage to find a few seats right at the back of the boat outside.

After a light lunch at a restaurant by the quay and loosing half of one of my teeth (pre-existing condition, which thankfully didn’t require an emergency dentist - not yet at least!) we then took an Uber to Auckland Zoo.

The zoo majored on African, South American, Australian and native New Zealand wildlife. Highlights being the native longfin Eel which was humungous, the conspicuously absent (in hiding) Kiwi bird and the Tasmanian devil, which we only caught a brief glimpse. The kids managed to negotiate a second ice cream of the day, bubble gum flavoured no less. 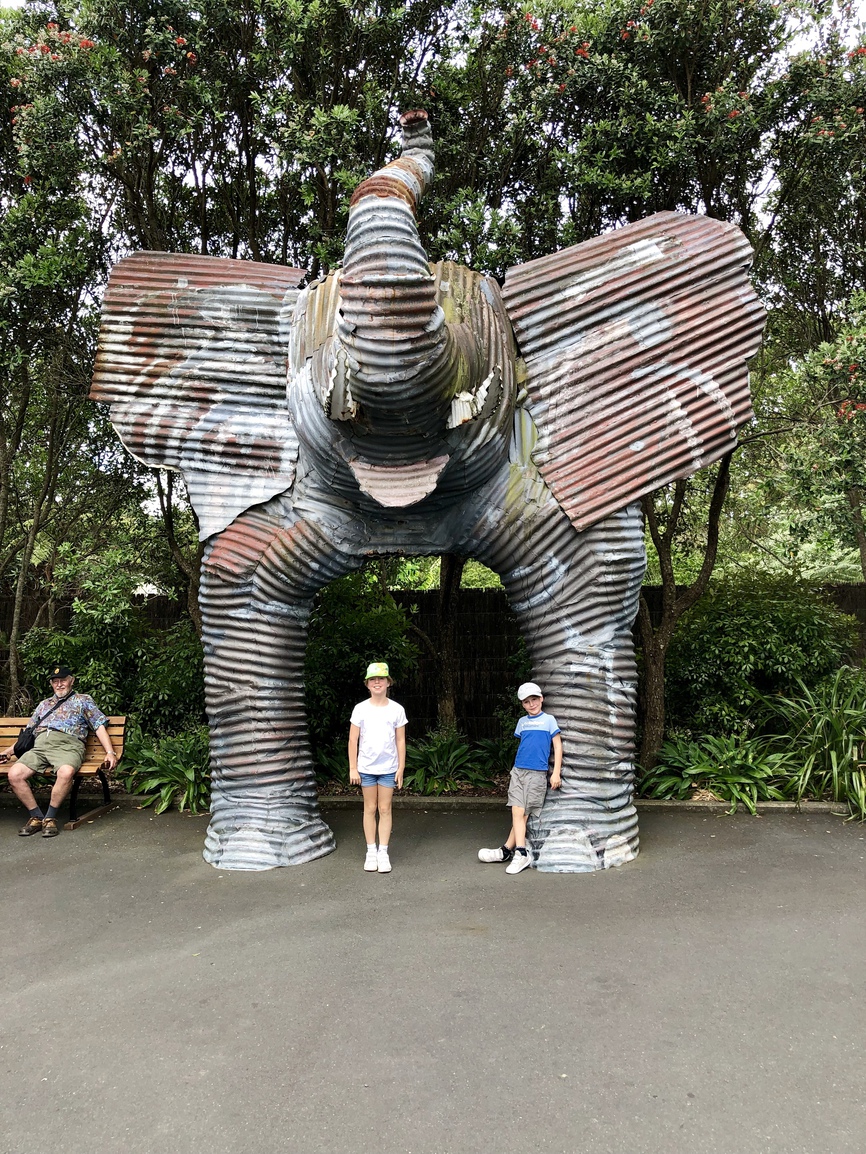 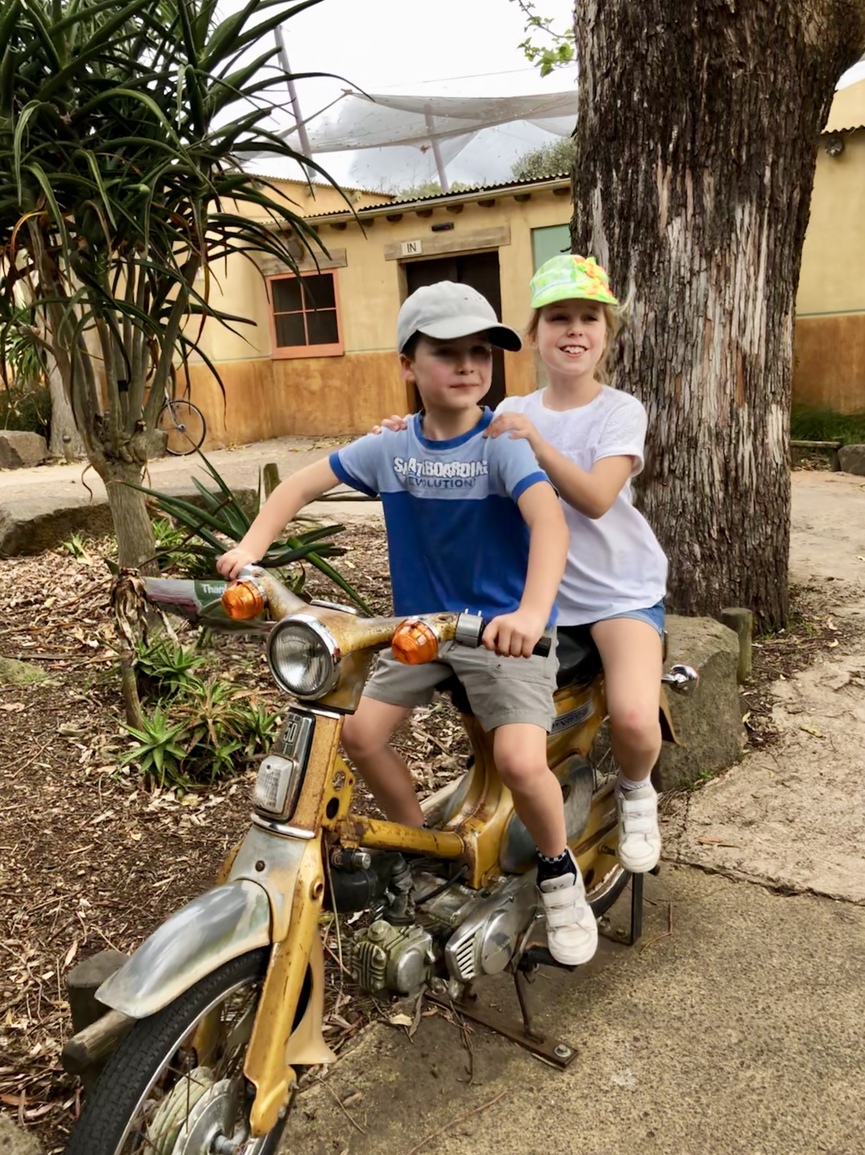 We Uber’d back to the apartment and I nipped out to get take away Chinese food for dinner from the restaurant 1 block down the road while everyone else showered. The restaurant didn’t look much from the outside but stepping into 20 large round tables with lazy Susan’s and a menu in Mandarin I knew I was in the right place. Some really delicious and authentic food which we all wolfed down - the kids must have been hungry as Chinese food is usually a battle!

Diana’s friend Ash dropped by for a chat and a glass of wine and then to bed for an early start tomorrow picking up the camper when the real adventure begins.