7am wake up call ready for our fishing trip on Lake Wanaka. A quick breakfast outside on the picnic bench before jumping on the bikes and heading to the marina.

Alex had a couple of falls on his bike as he wasn’t used to cycling down hill and on dirt tracks. He soldiered on and got the hang of it and we arrived at the marina 20 mins early. 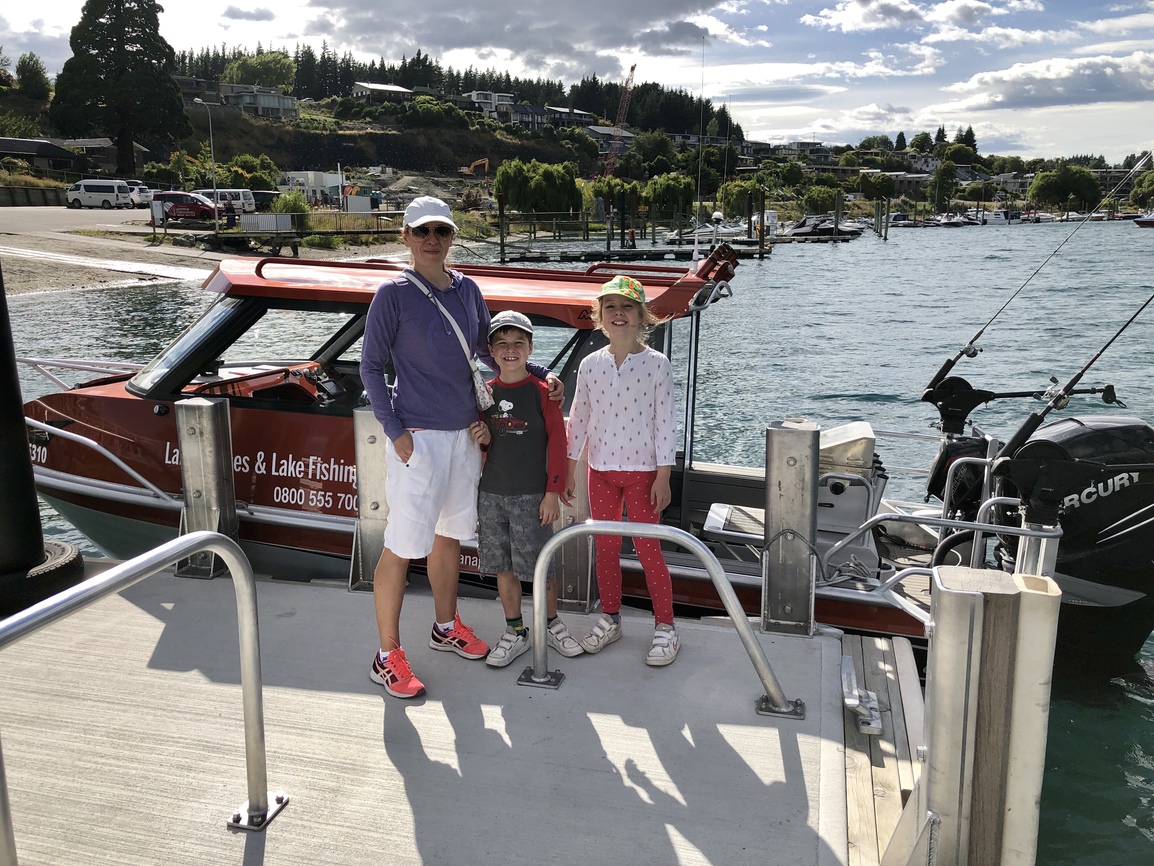 We locked our bikes to a signpost and said hello to our fishing guide for the day, Davy. Davy’s boat and truck looked very smart and colour coordinated and he was a bit of a character but good fun.

We boarded the boat and he told us all about the history of the lake and his business. We got comfortable while we waited for one more person to turn up which he did just before we were scheduled to leave. 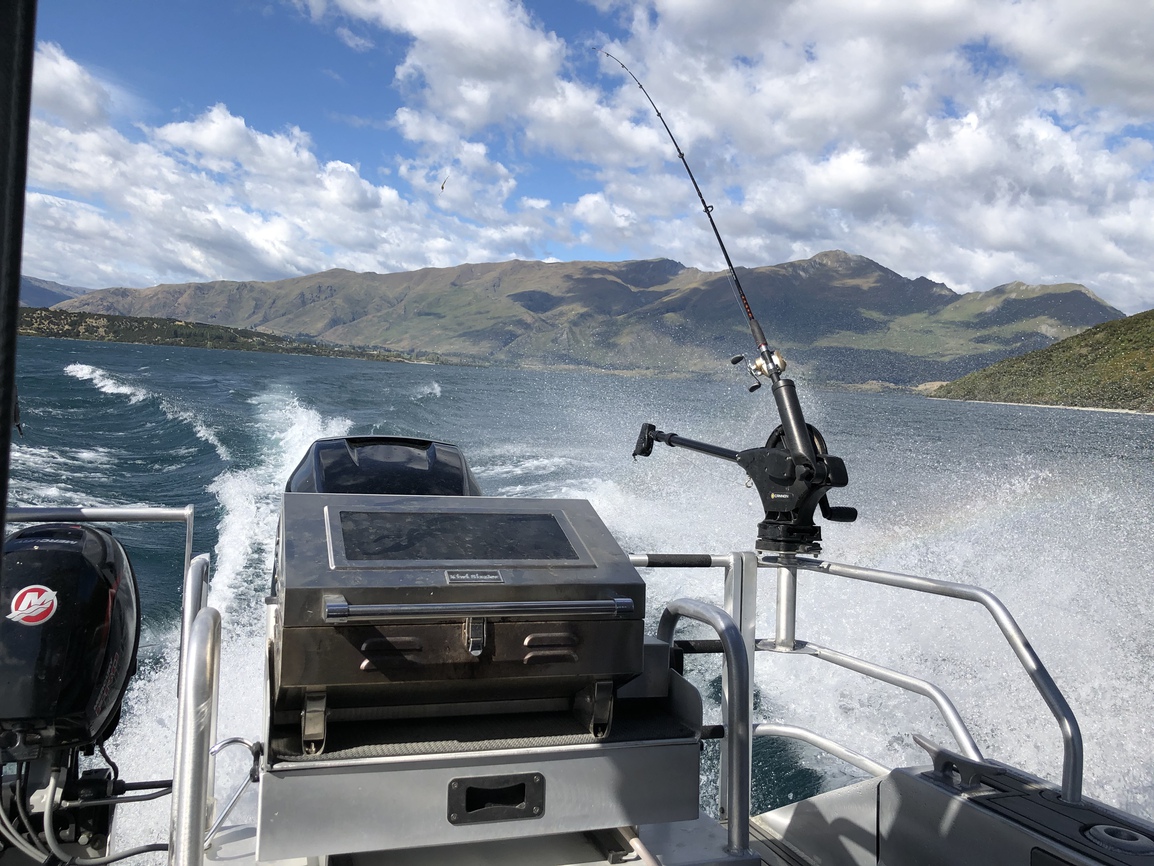 Once we were set and the kids had been offered life jackets we set off at quite a pace. Davy was clearly proud of his boat and had spared no expense and he wanted to show it off.

We headed off down the lake at speed, buffeted by the waves while we all hung on for a good 20 mins or so. Davy knew a good calm spot for fishing that he wanted to take us too just off the main lake, sheltered by the surrounding hills. 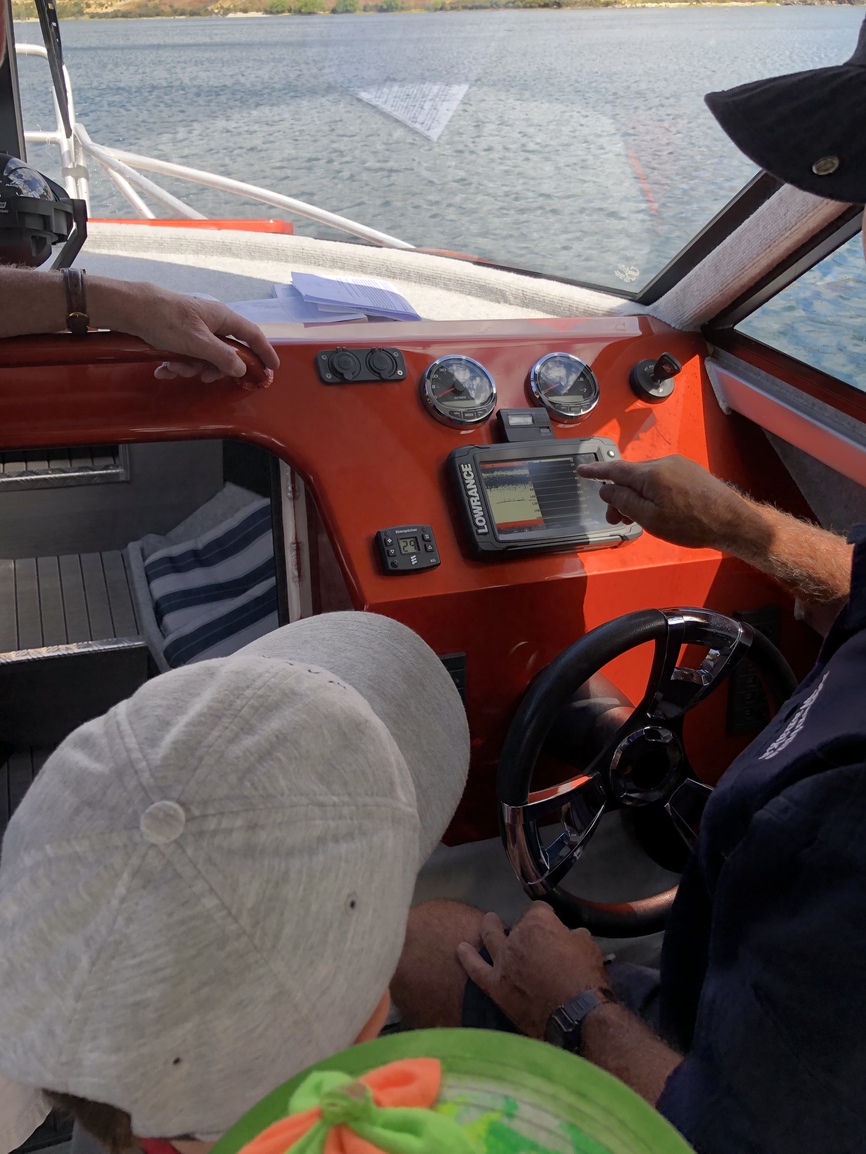 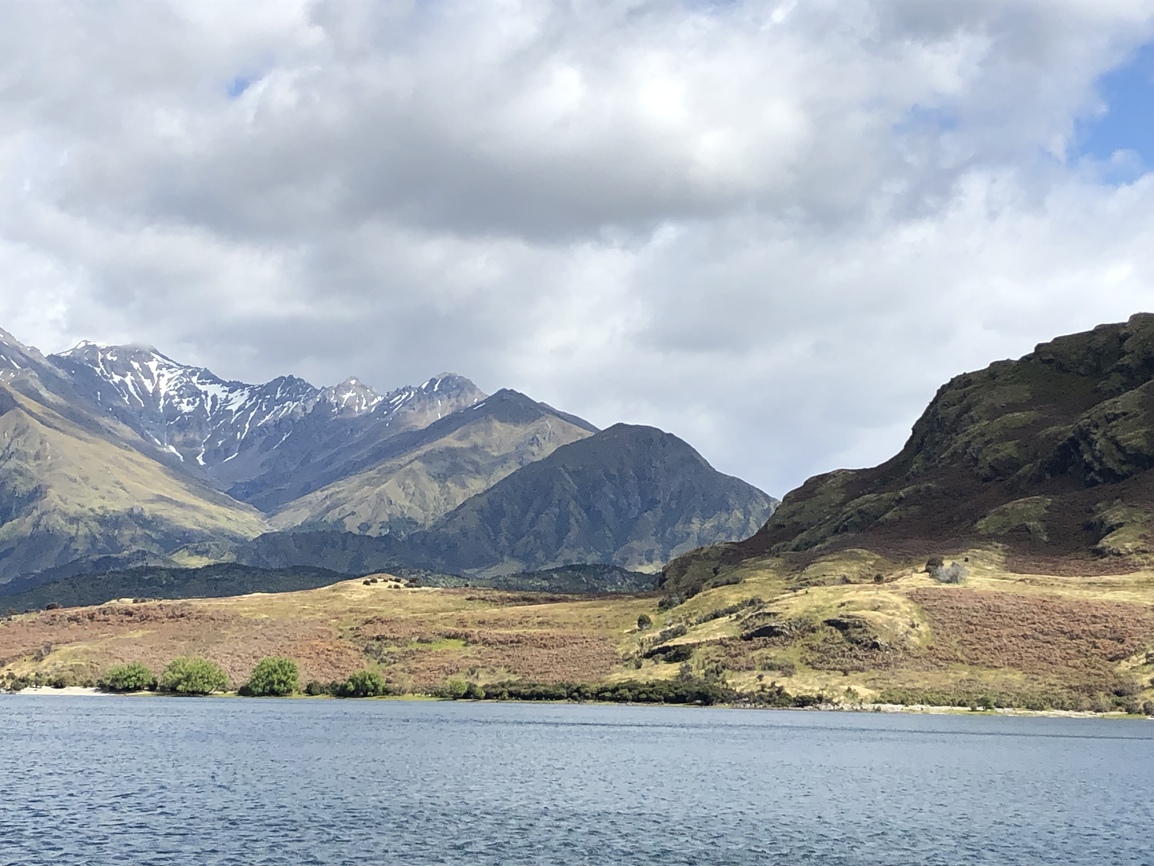 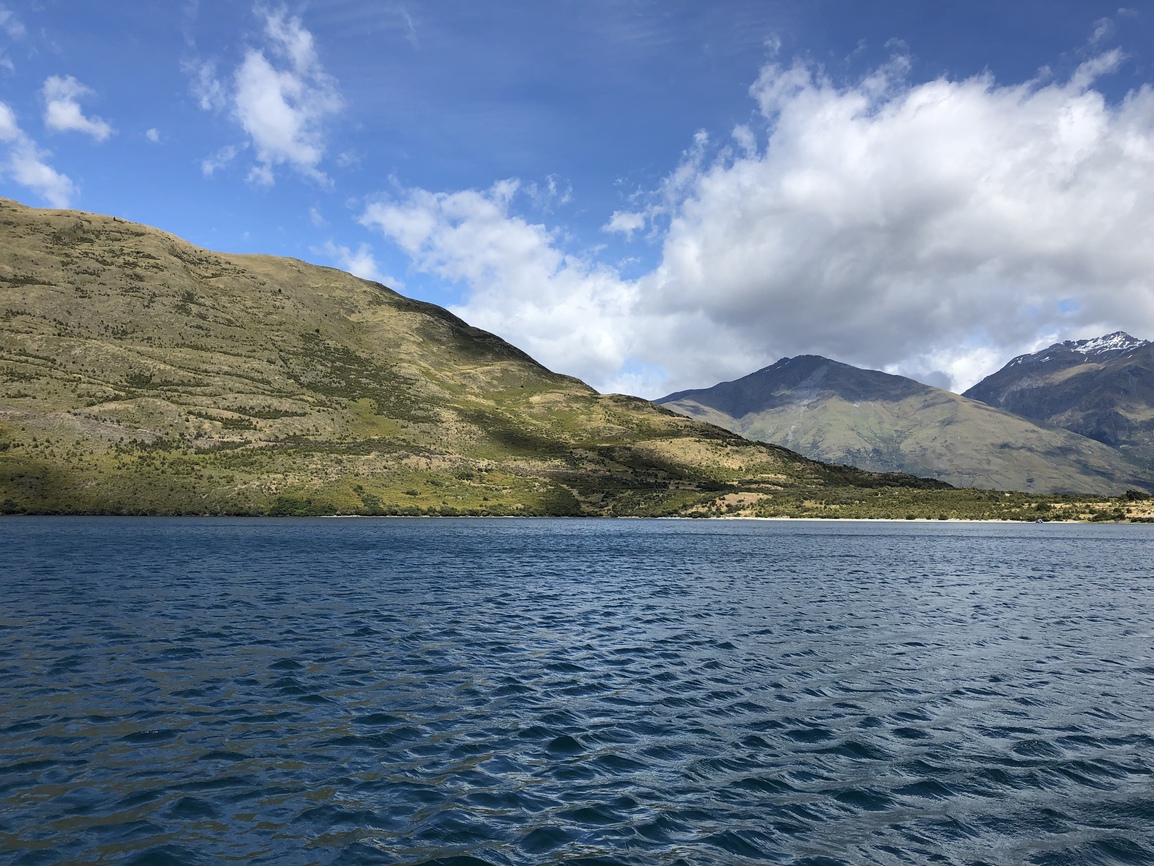 We arrived at the spot which was sheltered as promised and Davy switched over the outboard motors so that the smaller one was in use for manoeuvring and then set up the lines. The fish were pretty deep according to his sonar so he used large weights to sink the lines to the right depth. 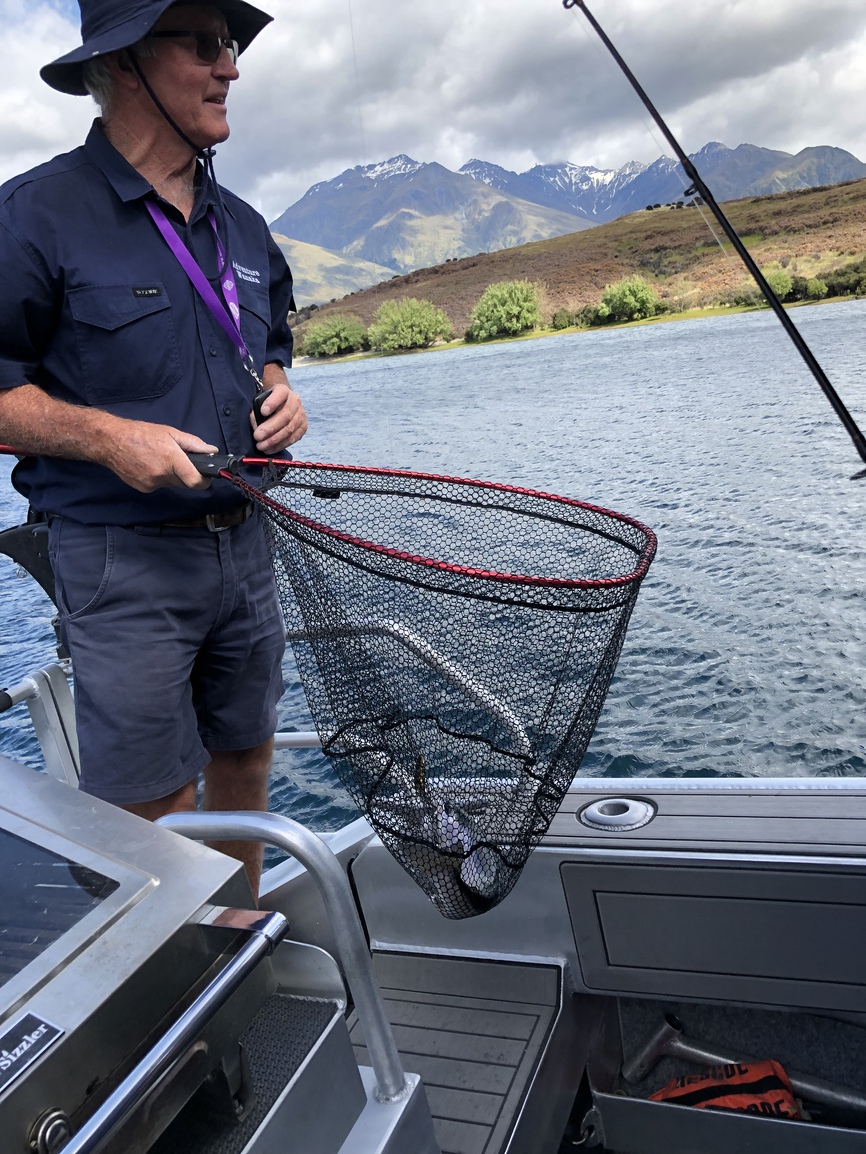 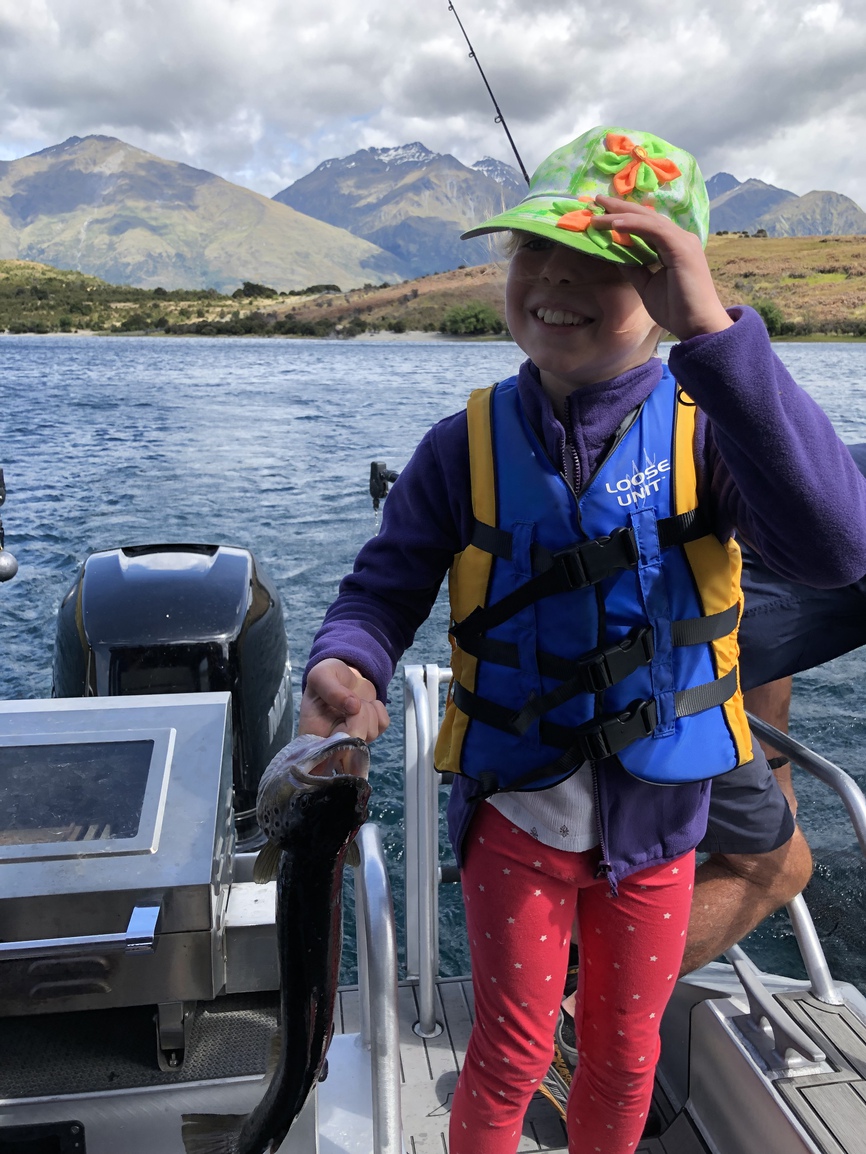 After about 15 minutes we had our first bite. Peter, the other person on the trip, and and experienced fisherman reeled it in. The second came quickly afterwards and the kids took turns to hold the fish and were really excited by the first catch.

Now that we’d secured lunch Davy reset the lines and broke out the tea and coffee and banana and chocolate muffins that his wife had made early this morning.

The boat circled around the same area and we consistently caught fish as we passed over the same spot each time. There was an underwater ledge and it seemed the fish liked to hang out at that spot. We took turns reeling them in a Bella caught a big brown trout which she was really proud of. Alex’s first attempt got away and his first catch was an old rainbow trout which wasn’t in good condition so we put it back - which Alex wasn’t very pleased about! 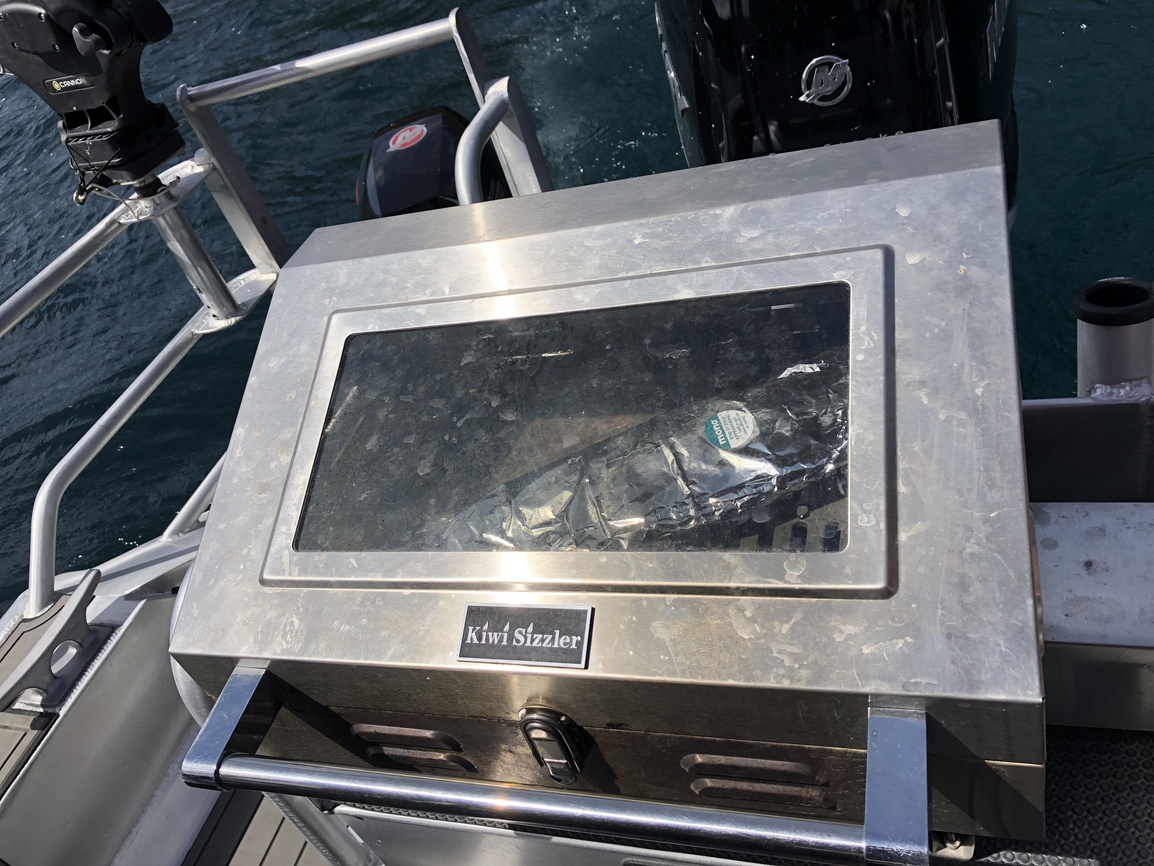 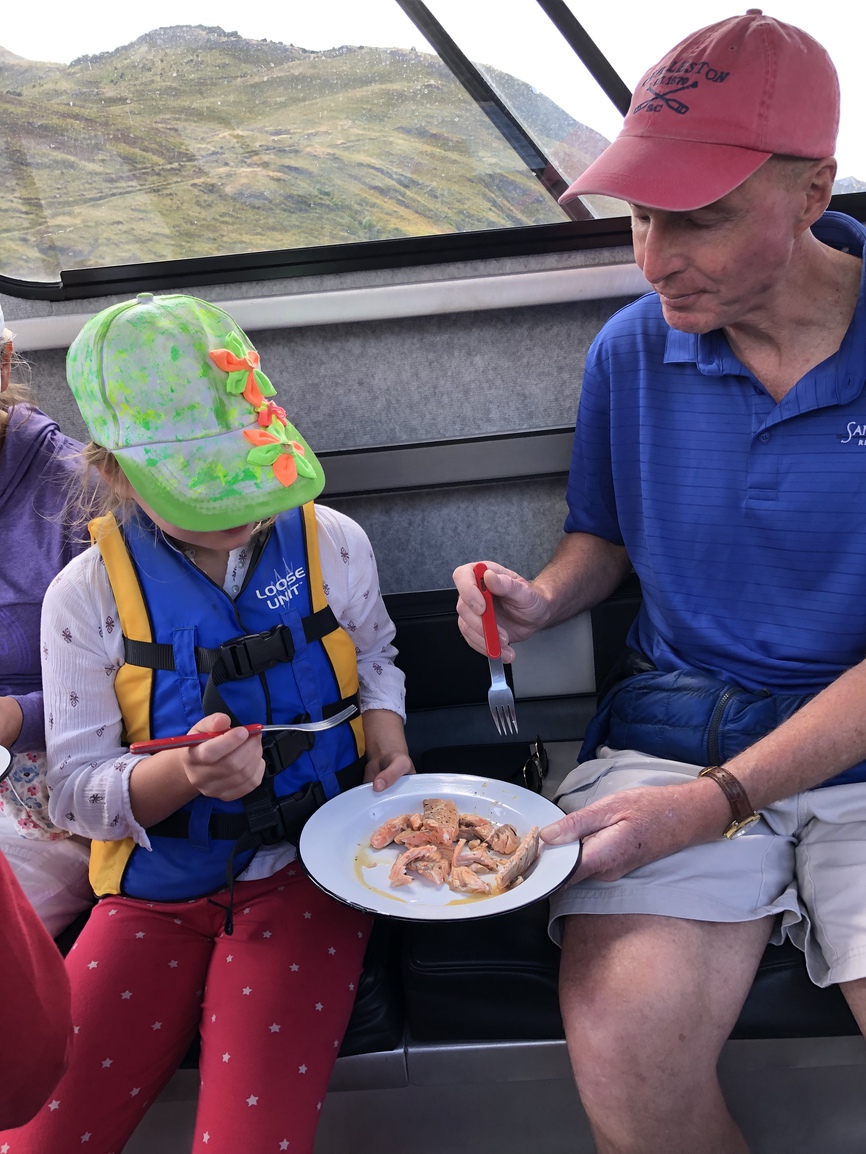 Davy fires up the bbq and we cooked one of the rainbow trout w’ed caught in tin foil with lemon. It was really delicious and we all enjoyed the experience. 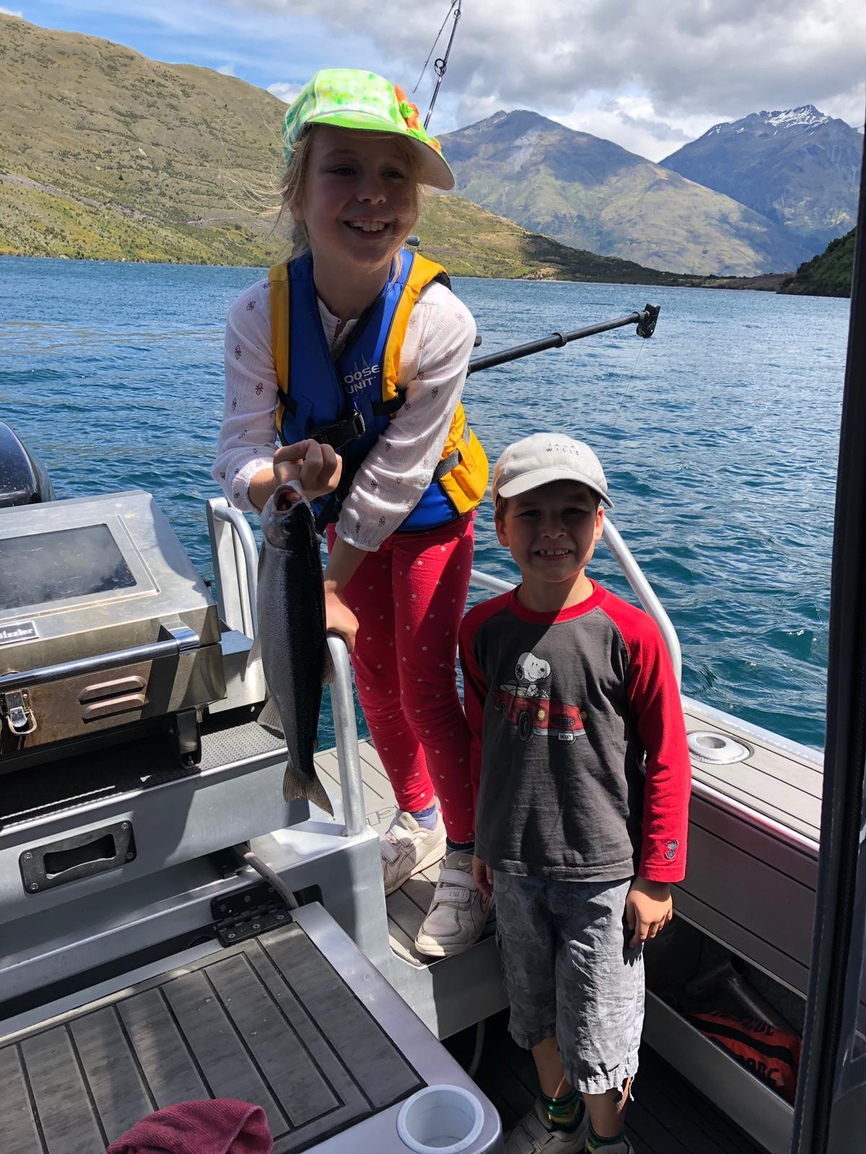 After about 1.5 hours it was time to head back so we slowly pointed in the right direction. At this point Alex had only caught the one we’d put back so we were all hoping we’d reel in one final catch before we headed back. As luck would have it we hooked two right at the last minute and Alex bagged his first proper catch. I reeled in the second but we decided to put it back as we already had more than we could eat. 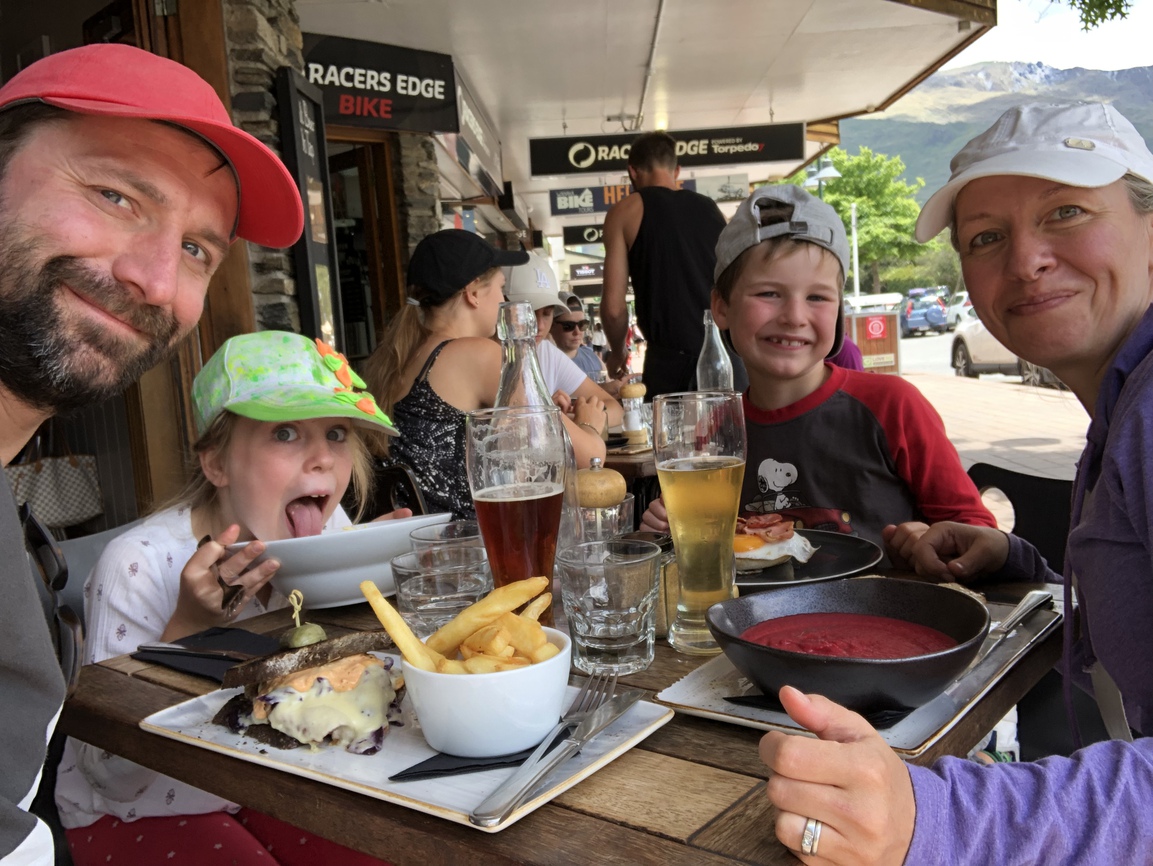 We said our goodbyes to Davy and Peter, picked up our bikes and cycled the short distance into town to find some more substantial lunch. Almost the first cafe we came to looked nice so we stopped and found a table outside. The lunch was great and the kids thought it was epical, probably because they were hungry!

After lunch we dropped into the supermarket for lemon and salt and pepper and wine to cook our fish and cycled back to the camp site. The kids did really well on the journey back but we all struggled on the final hill back to the campsite.

Once we’d put the bikes away and the fish in the fridge we changed into our swimming gear and walked the short way down to the lake for a swim. The sun had gone in by this point so we only stayed for a quick dip before heading back to camp. 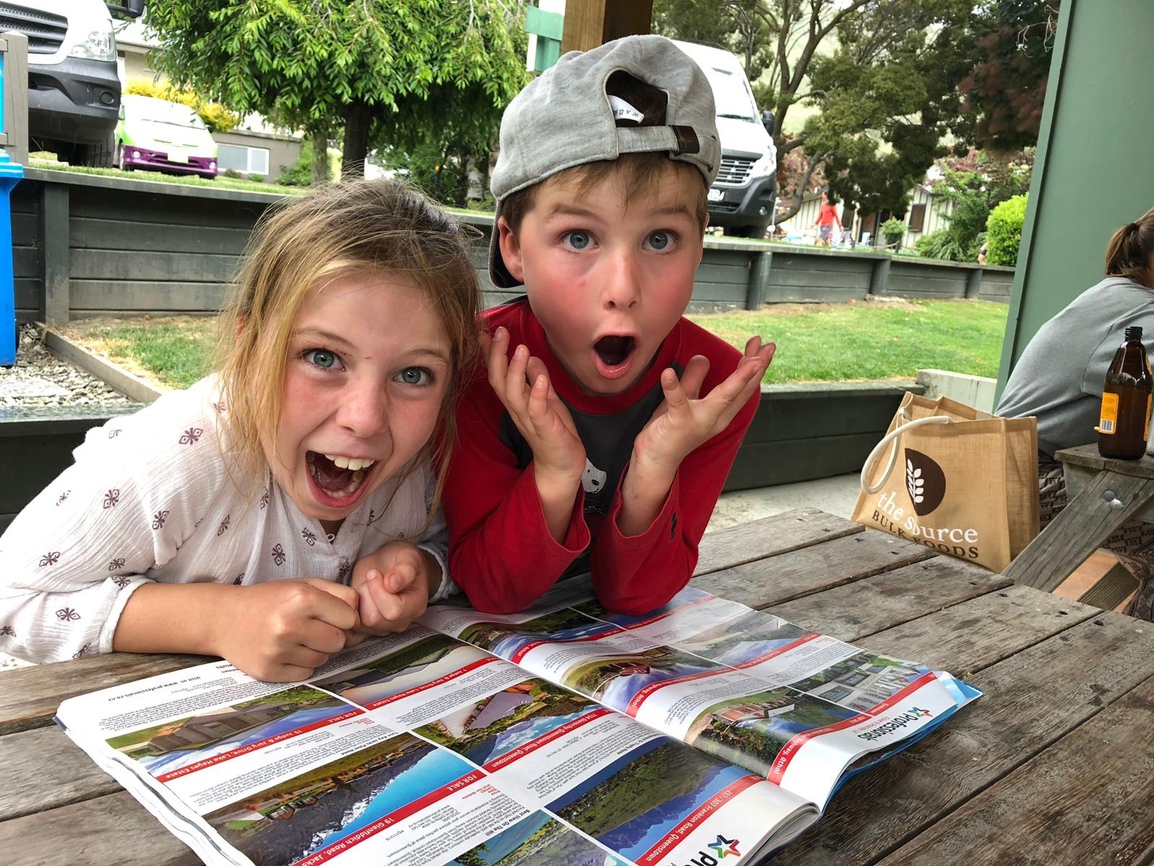 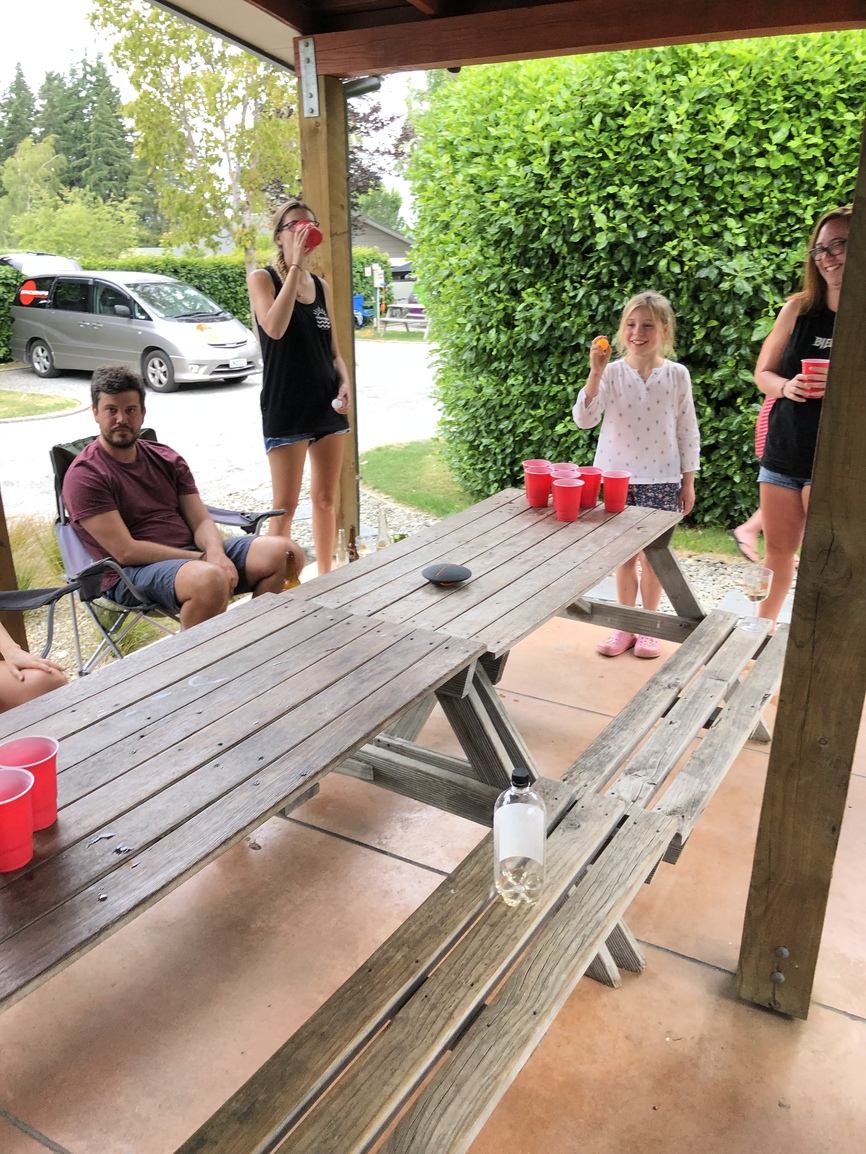 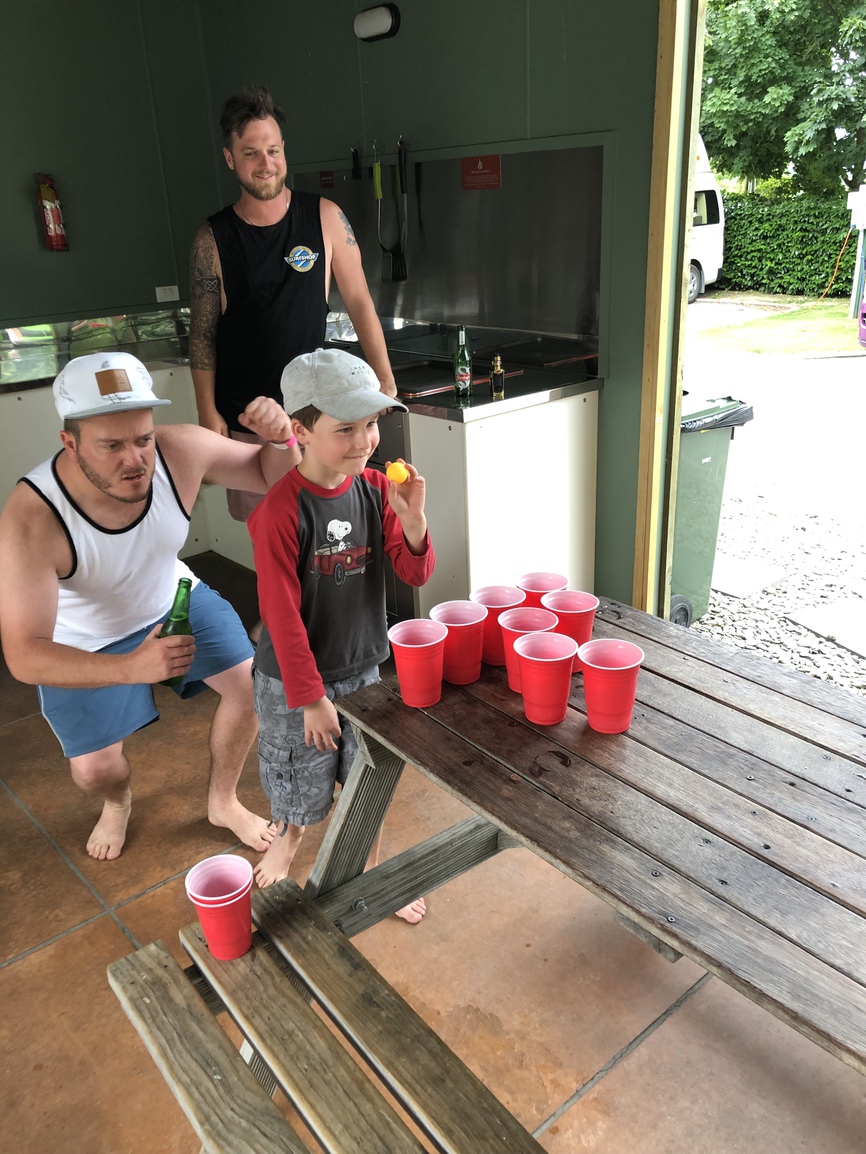 Appero under cover in the bbq area while we browsed the local property magazine followed by a dinner of Bella’s brown trout on the bbq. The kids made friends with some of the locals camping here for the new year celebrations and played beer pong with them. (Not drinking the beer!) 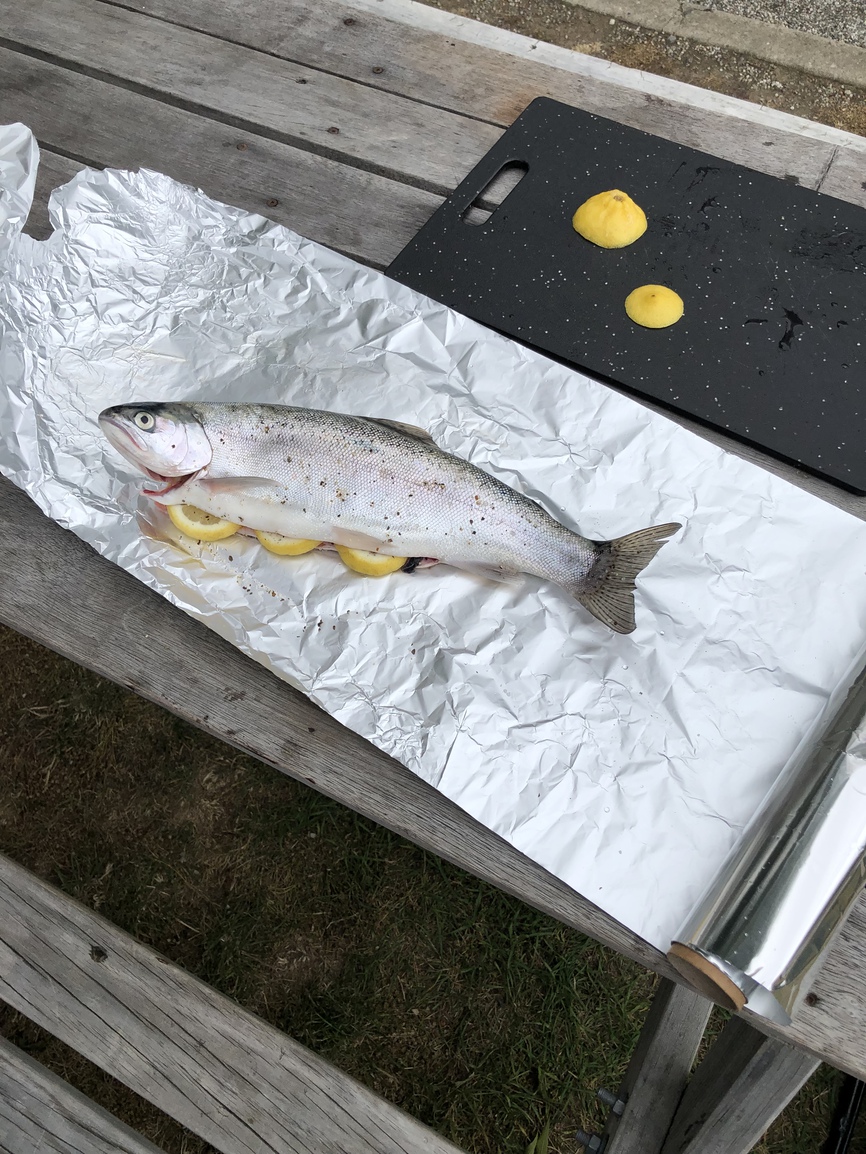 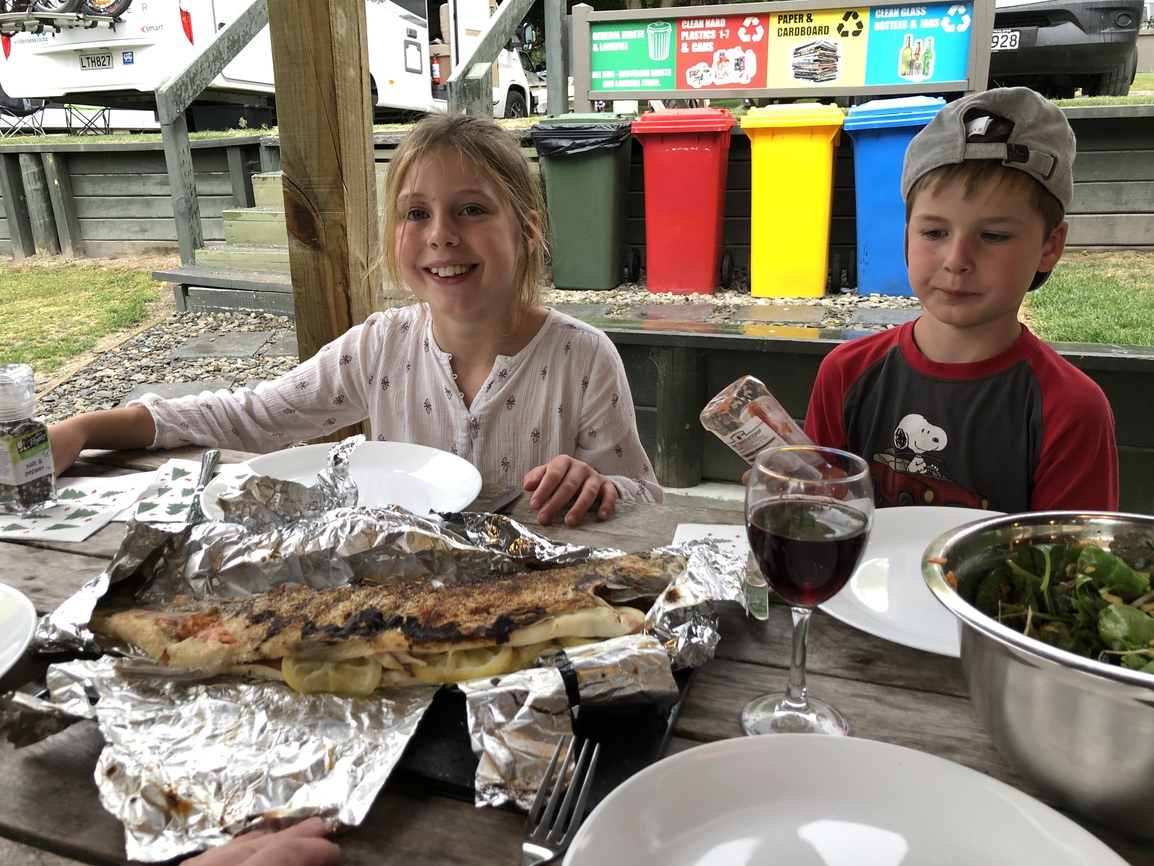 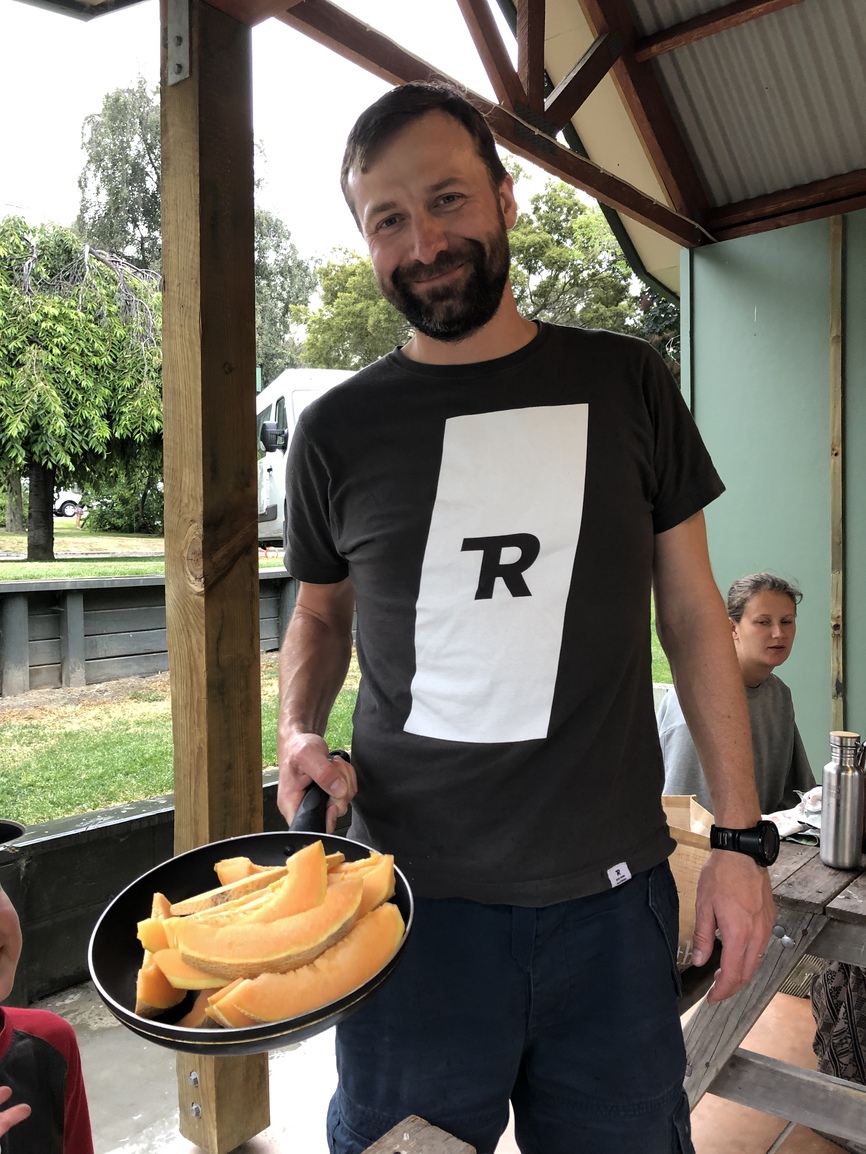 The trout was sublime and we rounded the night off with a movie in the camper hiding from the rain before bed.

Tomorrow we are kayaking on lake Wanaka and then moving on to Te Anu for the new year.