Early start as usual. Breakfast and out walking towards the lake front by 8:30am.

We arrived at the pier by 8:45am and queued up to check in for Kjet. After check in we were given waterproof ponchos and life jackets in preparation for our ride. 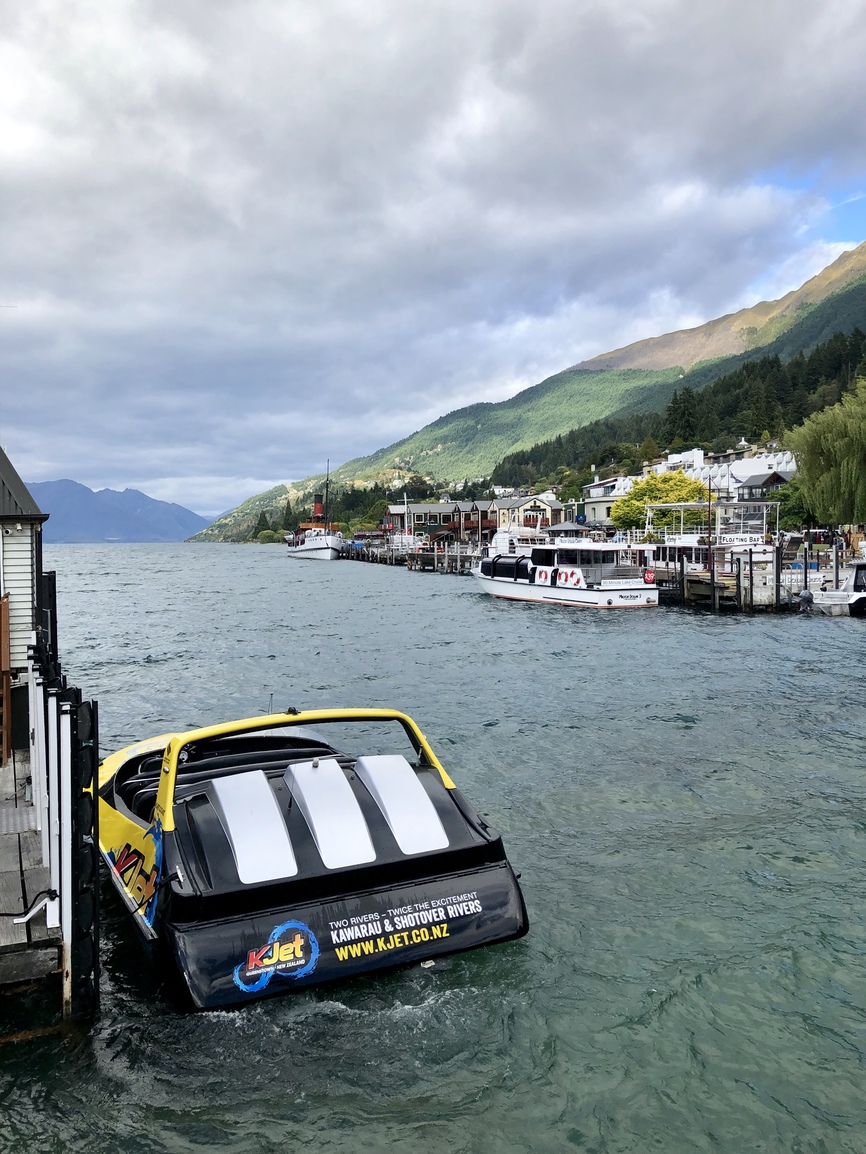 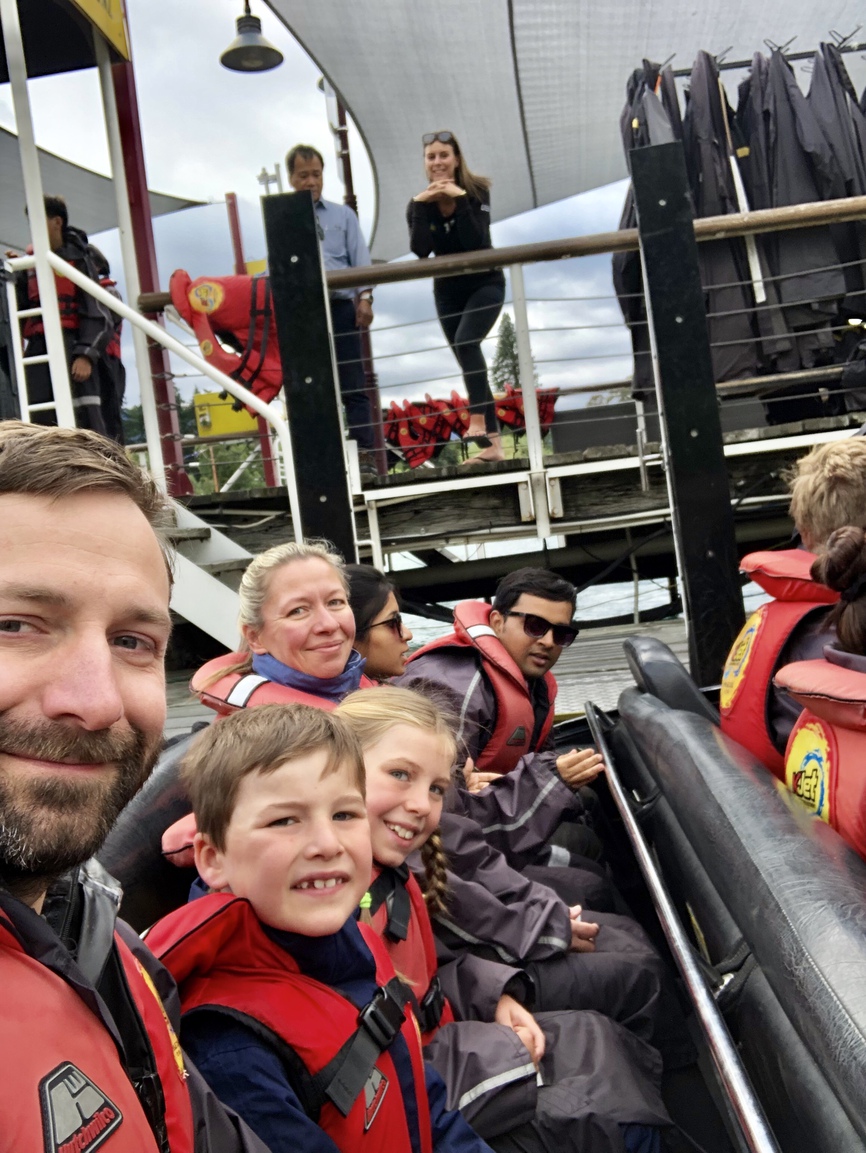 We boarded, kids in the middle and without further ado moved out into the lake and had a quick safety briefing before our first 360° manoeuvre. The driver clearly enjoyed his job and sped around the lake jumping us over waves and making sharp turns. There were two boats as part of the trip and we played tag, taking turns to take the lead and watch each other doing 360’s.

Once we’d raced around Lake Wakatipu we headed for Kawarau River and passed under a couple of road bridges, really close to the piers. The driver took us really close to everything along the side of the bank, trees, rocks, stones, beaches, whatever was there he would get close to it and try to elicit a scream from his passengers. Which we all obliged! 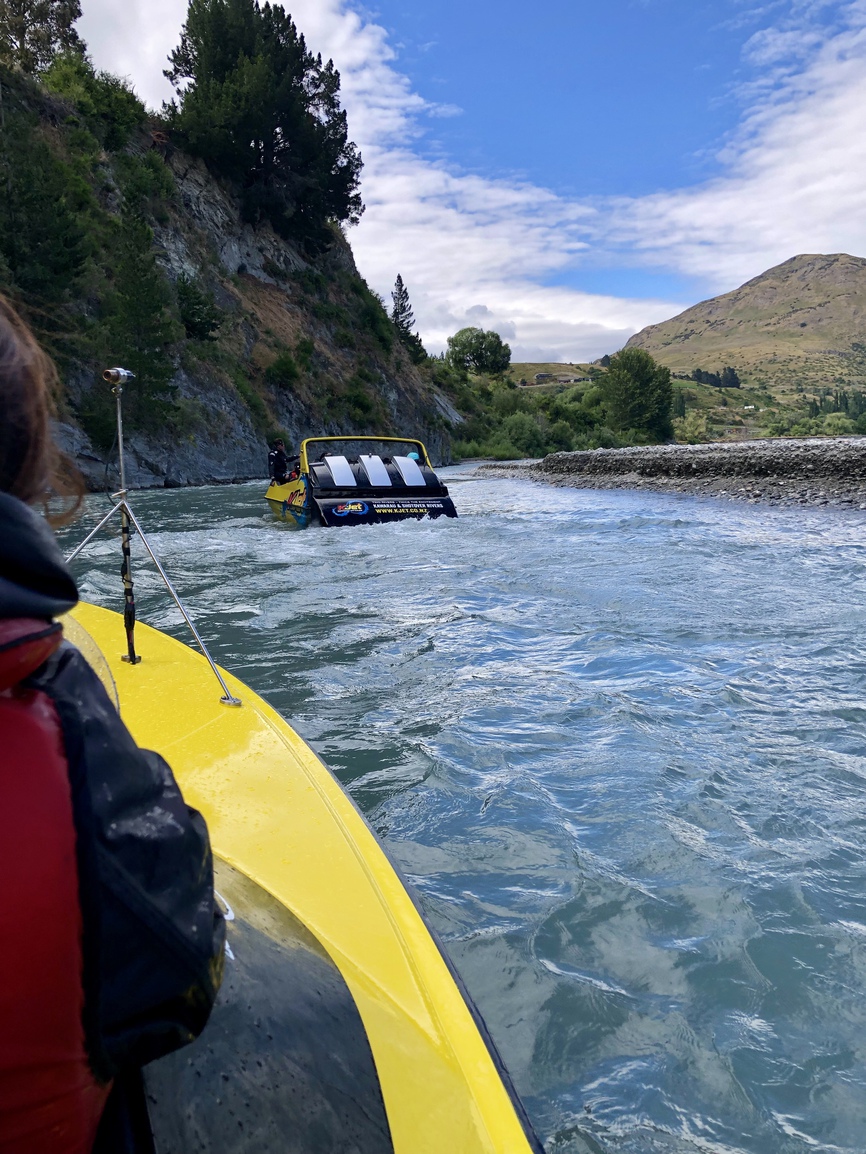 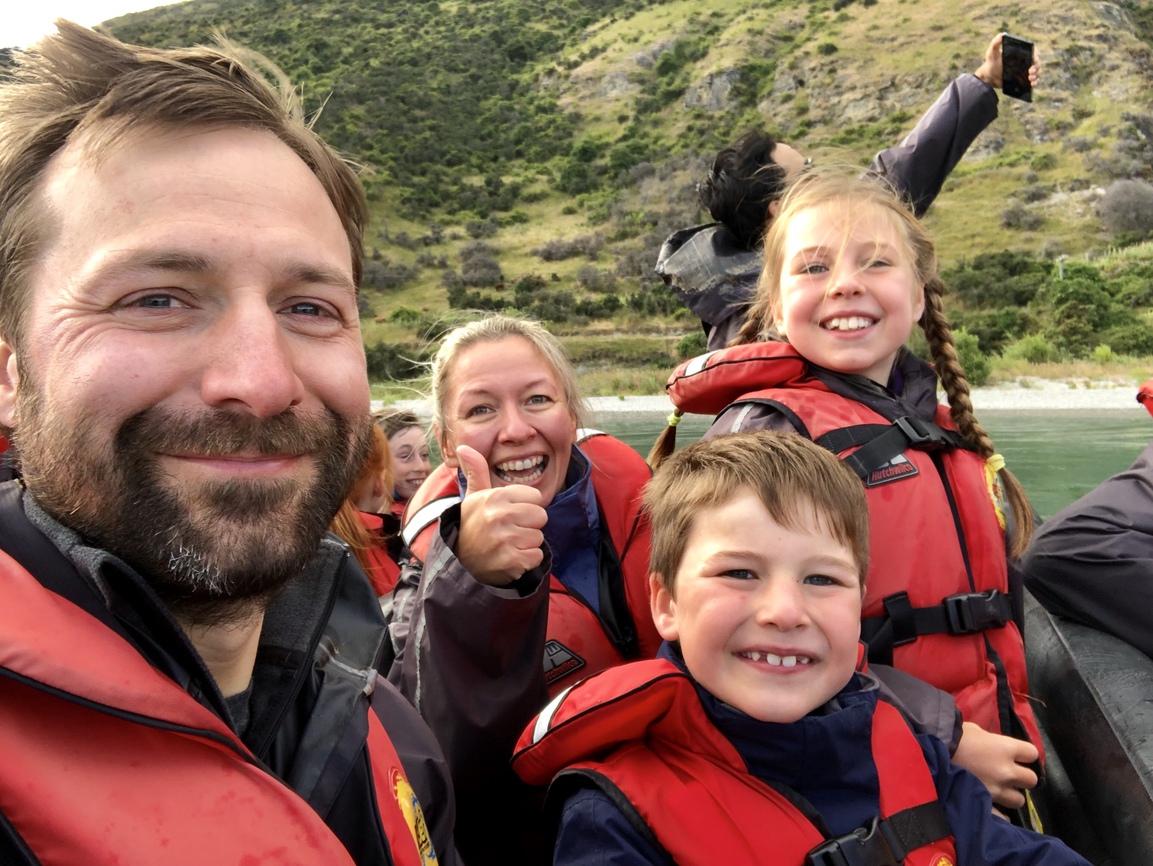 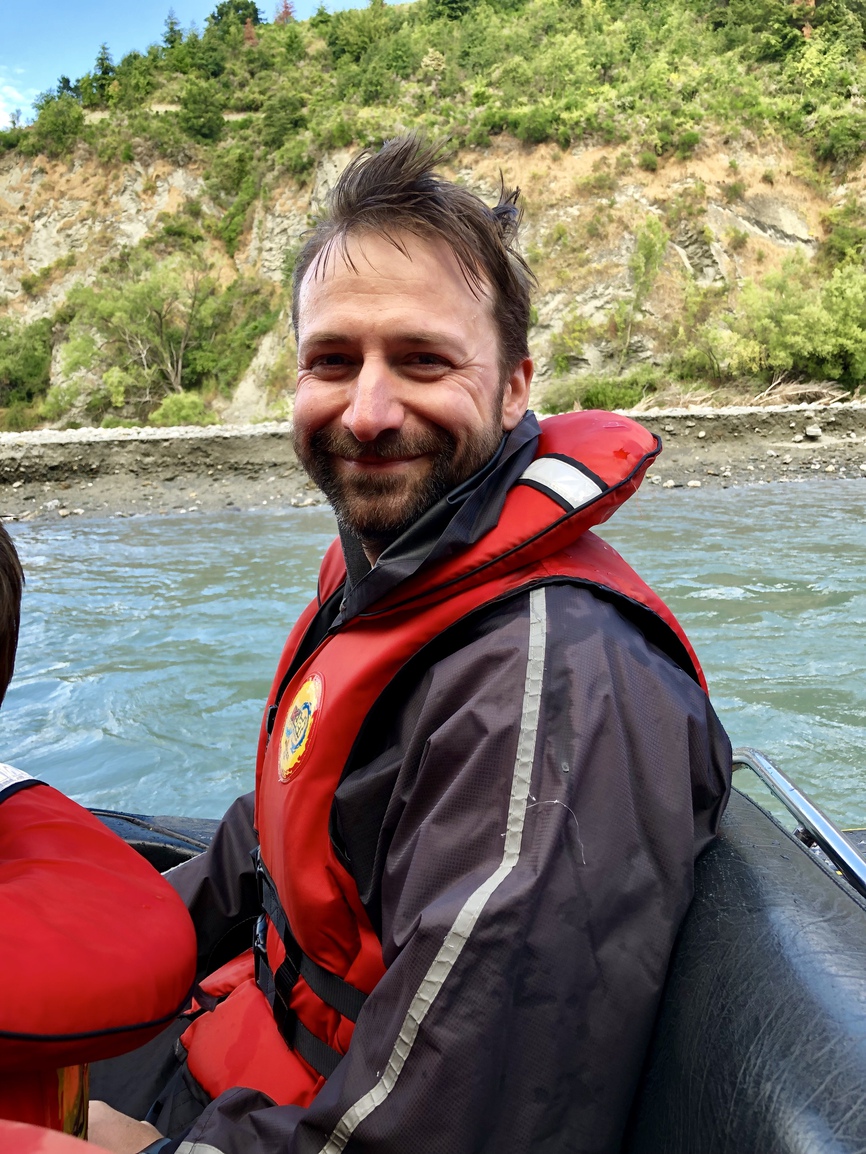 We paused before entering the Shotover River and the driver explained that the jet boats only needed about 20cm of water to operate and that now he’d demonstrate. We sped up the river getting really close to edge and fallen trees as well as doing 360’s whoever possible. I was constantly getting wet being at the side of the boat! There were some really hairy moments especially at one point when we heard rocks scraping along the side of the boat. The driver wasn’t phased, he went faster.

Once we reached as far up the Shotover River as we were going to get we paused for photos after a quick 360, naturally. Jalan then reiterated the lack of water required and that this was the fastest part if the trip with speed ms reaching 85-99km/h. He then gunned the engine and got going speeding along cris-crossing the other boat and the river and coming really close to trees rocks and anything else he could find. We loved it! 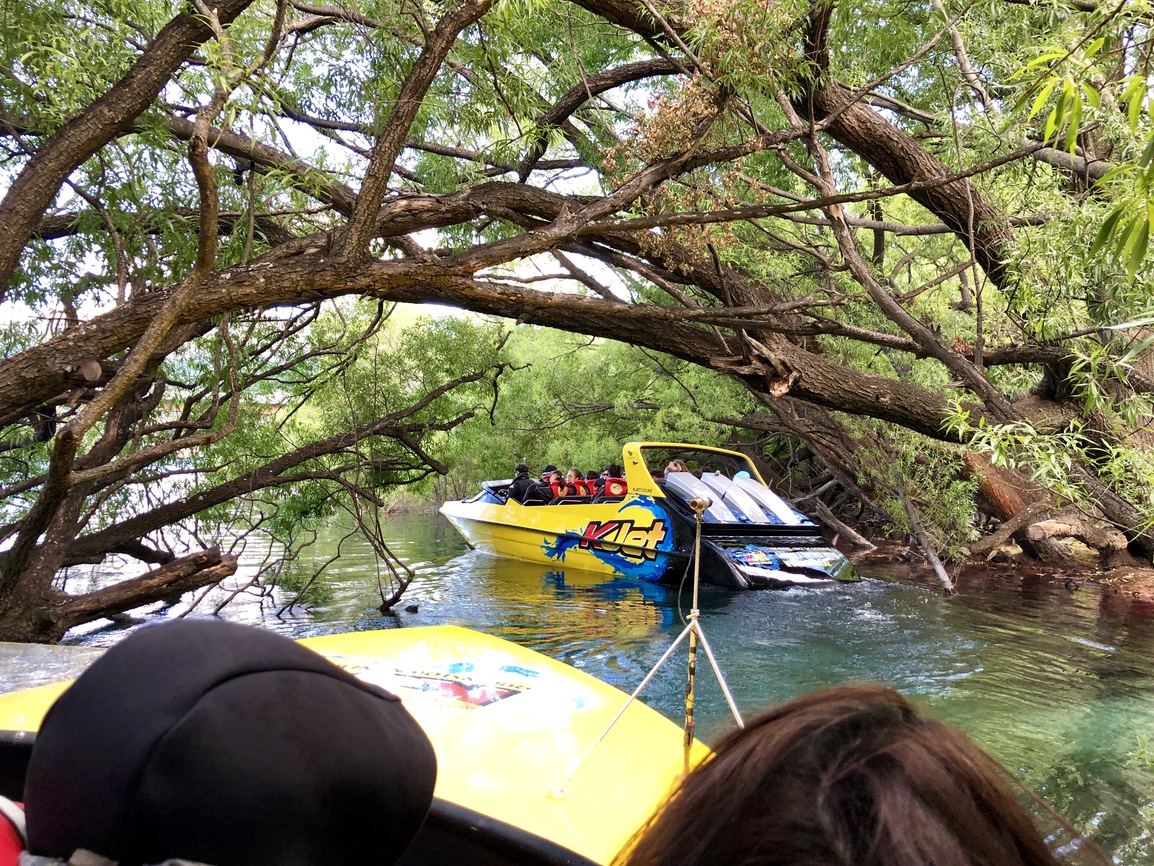 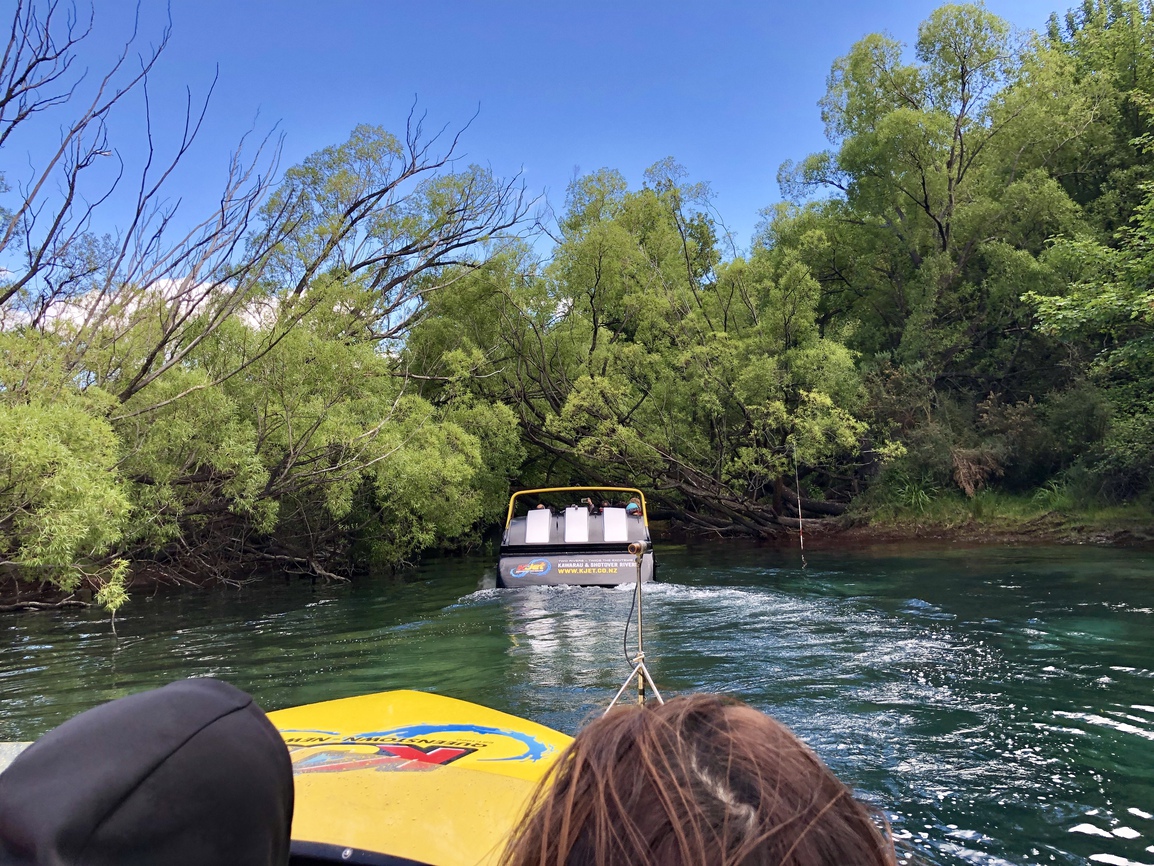 We headed back to the lake slowing to take in a tree tunnel before returning to full speed and jumping up the small weir under the road bridge.

Back on the lake and the waves had increased in size which slowed us down and caused the bottom of the boat to smack down for some spine jarring action.

Safely back at the pier we disembarked and headed to the under water observatory to look at our photos and collect our things.

We headed back to the campsite via a coffee place and packed up ready for departure. We emptied the tanks and got going by 11am.

An easy drive out of Queenstown and over the Lindis Pass before stopping for lunch at Omarama.

After lunch we kept going to Lake Pukaki which was our first freedom camping option for the night. One look at the view and we decided to stay! With Mt Cook in the background and crystal clear vivid blue water it was the perfect place to spend our last night in the camper. 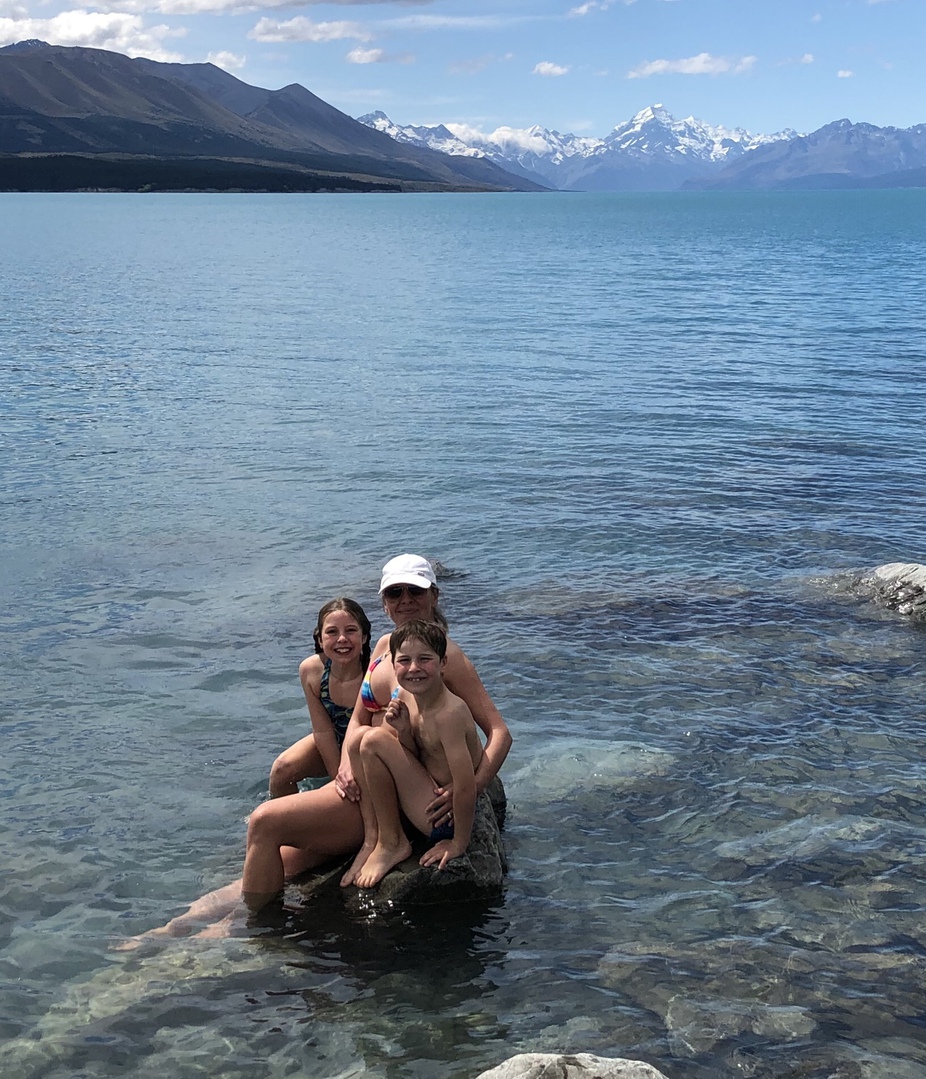 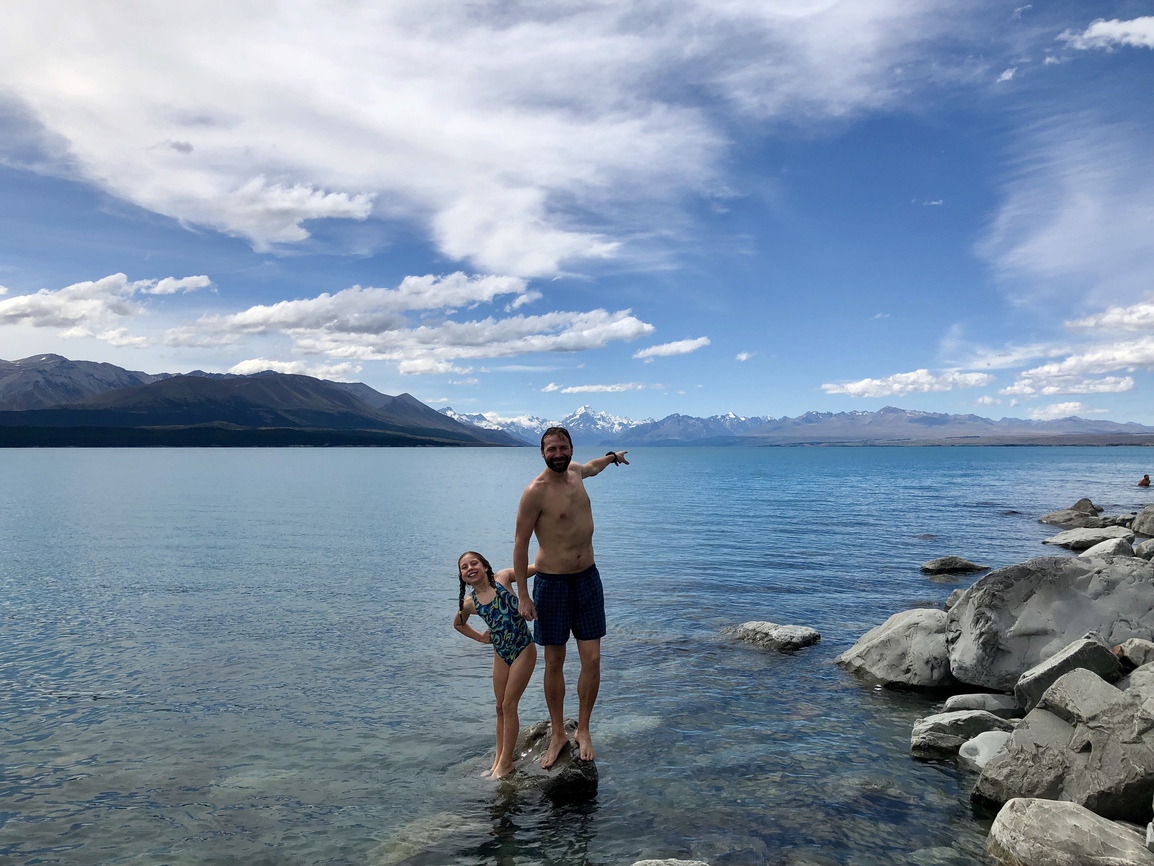 After parking up we raced down to the water and took a swim which was really refreshing and the kids loved jumping in off the rocks.

We setup appero in the shade of a tree and with a great view of Mt Cook and snacked while we played a throwing game we made up using the thousands of pine cones lying about. 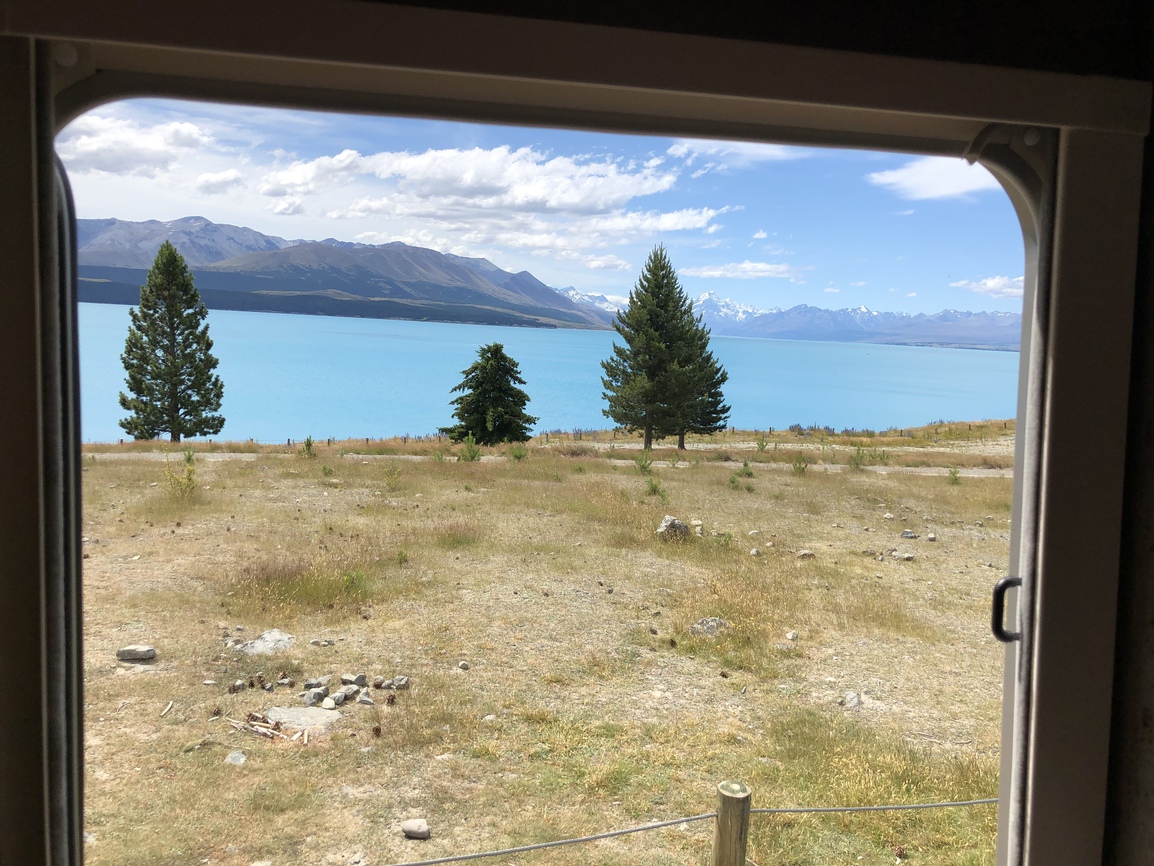 After the game we went back for another swim, marvelling at how hot the rocks were under foot before returning back to the camper van to make dinner. 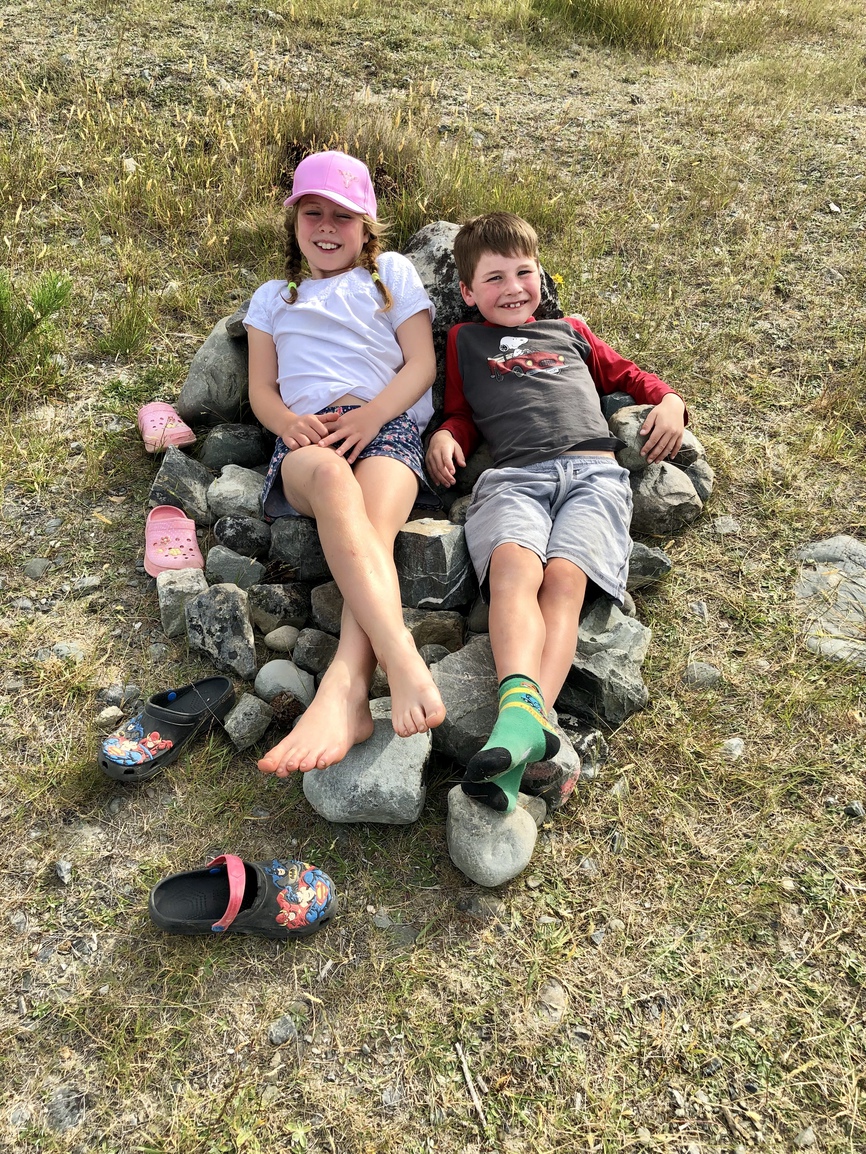 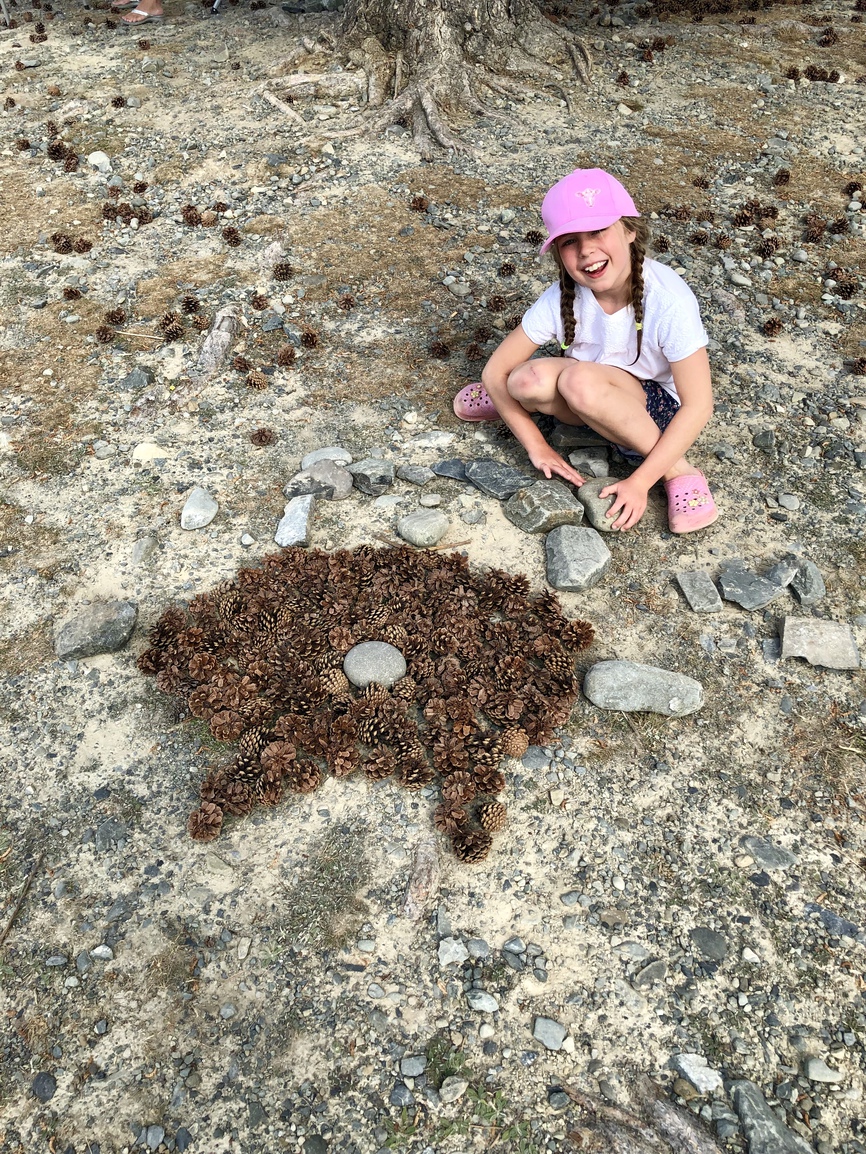 The kids created a sun lounger with built in massage from hot rocks, pine cones and other bits and bobs while we cooked dinner which was everything we had left over.

We ate dinner taking in the view and went to bed satisfied after a brilliant last day in the camper.

Tomorrow we drive to Christchurch and return the camper.