Another and hopefully final early start. Cereals for breakfast, quickly did the washing up and tidying and we were heading for the main road at 8am.

We were at the bottom of a gravel path by Lake Pukaki and had woken to stunning picture postcard views of the lake and Mount Cook. Getting back up the hill required a bit of a run up and some wheel spinning but we made it, probably waking up all of the other people in their campers in the process.

Once we were back on the main road the stunning views continued framed by fields of purple lupin’s which made the views even more special. We were on a deadline though, 2pm back in Christchurch, packed, cleaned, emptied and keys handed over so no time to lose by stopping for photo’s.

After 100km or so we left the mountains behind and drove through flatter farming land with quiant little villages dotted along the route. That all ended when we reached State Highway 1 and the traffic instantly became busy and the towns bigger.

We drove for several hours until we reached the town of Ashburton which was essentially a large town split down the middle by the highway and sprawling out all around. We stopped at the public dump site and emptied the tanks and then when hunting for a recycling centre. The only one in town required payment and we were too keen on paying so we back tracked to the nearest supermarket, parked on the street nearby and used the bin in front of their building. 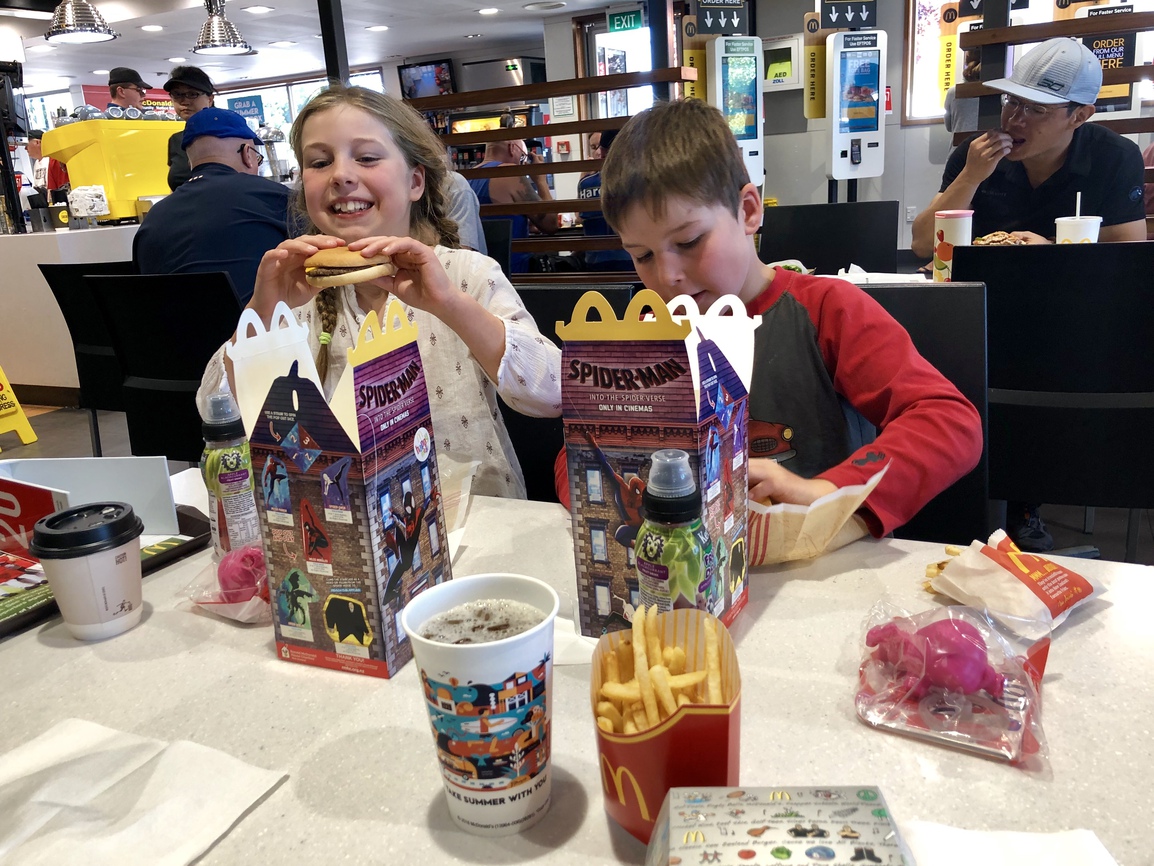 Afterwards it was nearly lunch time and we’d promised the kids that we could have fast food once during the trip and we happened to be next to a McDonalds. (pretty much the only one we’ve passed during our whole trip) McDonalds happy meals it is then. McDonalds seems to have changed somewhat since we were last there. They seem to want to be a coffee shop and you order yourself from a digital screen - seemed like an improvement to me. I had the Angus Kiwiburger which had a fried egg and beetroot on top of the burger. It was all as expected - not that satisfying, but the kids loved it naturally.

Back on the road and the final push to Christchurch just over an hour away. The countryside was fairly unremarkable, flat farmland interspersed with small suburban towns.

We’d picked out a couple of potential petrol stations close to the drop off point based on our route. Google Maps decided to reroute us without me noticing and so we ended up arriving at the drop off point without filling up the tank or LPG bottles. We drove back to the highway and found a petrol station filling up the diesel tank and exchanging the large LPG bottle for a full one. We still had the small LPG bottle to go though and that garage couldn’t help. They directed us to another garage 5 mins drive away and we raced off, arriving at the other garage just as another Wilderness camper was filling up their tanks. We refilled the small LPG bottle, noting that it would have been 10 NZD cheaper to refill the large bottle here also (oh well) and then raced back to Wilderness.

We arrived with 15 minutes to spare, parked up, took our things inside and said goodbye to the camper. The lady that checked in the camper was very friendly and chatted to us about our journey and the places we’d been. The check in went smoothly with no problems and 10 minutes later we had a Uber outside their front door to pick us up.

It was a twenty minute drive into the city and we passed through several suburbs, all with large family homes with back yards. It seems to be quite a sprawling city - lots of suburbs, a bit like LA as I remember it but not at the same scale. 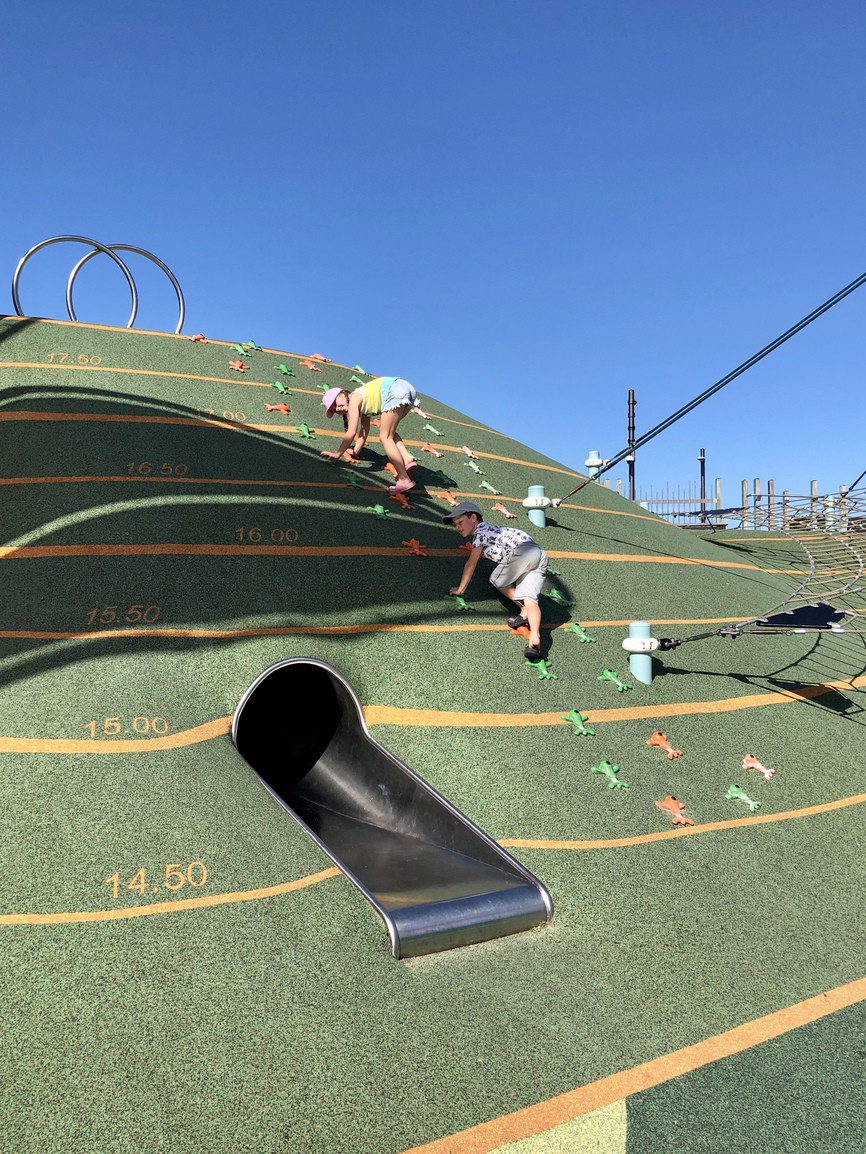 By 2.30pm we were at our apartment, checked in and relaxing in our room. The kids were excited after the change of scene and events of the day so after showers and some homework we walked to the nearby playpark. The playpark was really great, lots of climbing apparatus, trampolines, swings all on springy foam. We let the kids blow off some steam for a while before walking back to a Thai restaurant we’d seen on the way.

Downtown Christchurch seems like its going through some redevelopment. There were lots of historic buildings in different states of repair, quite a few had already been replaced with modern buildings. There also seemed to be a lack of people. We wondered if it’s just because it’s the weekend and all of the locals are out in the suburbs. 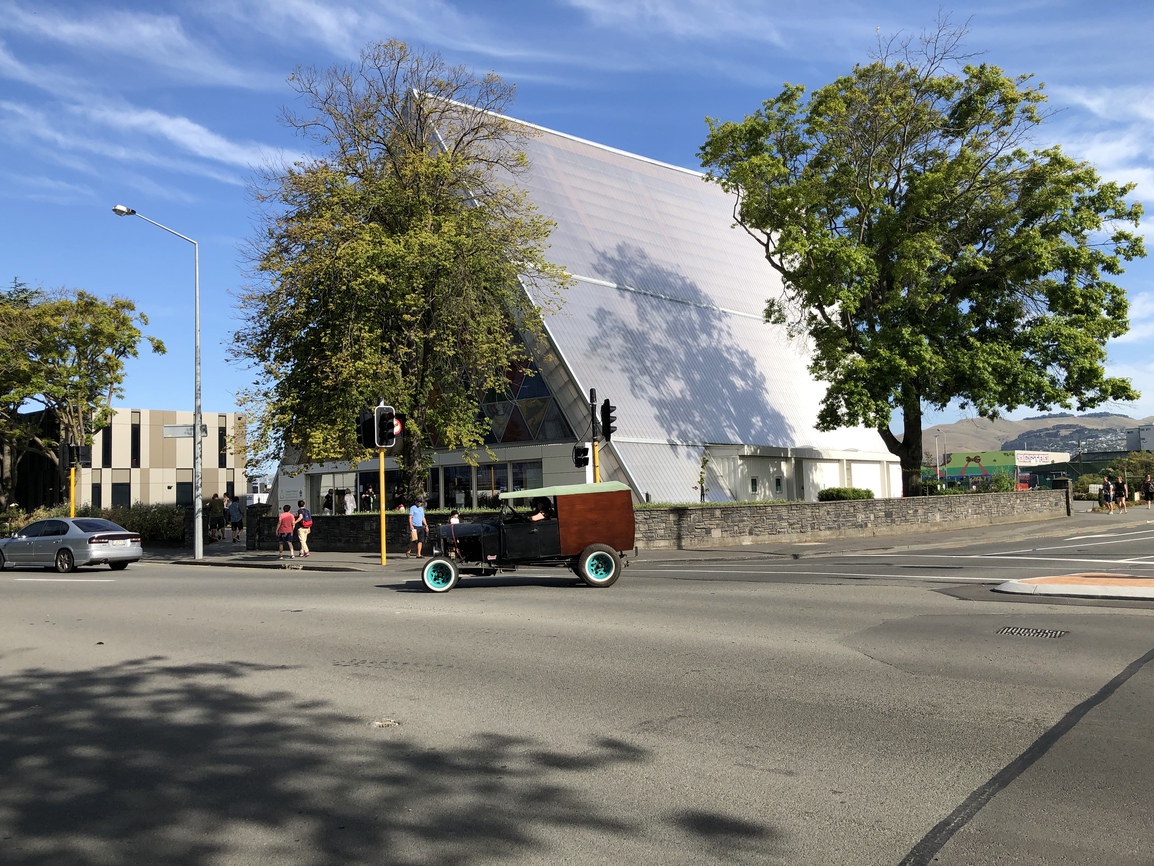 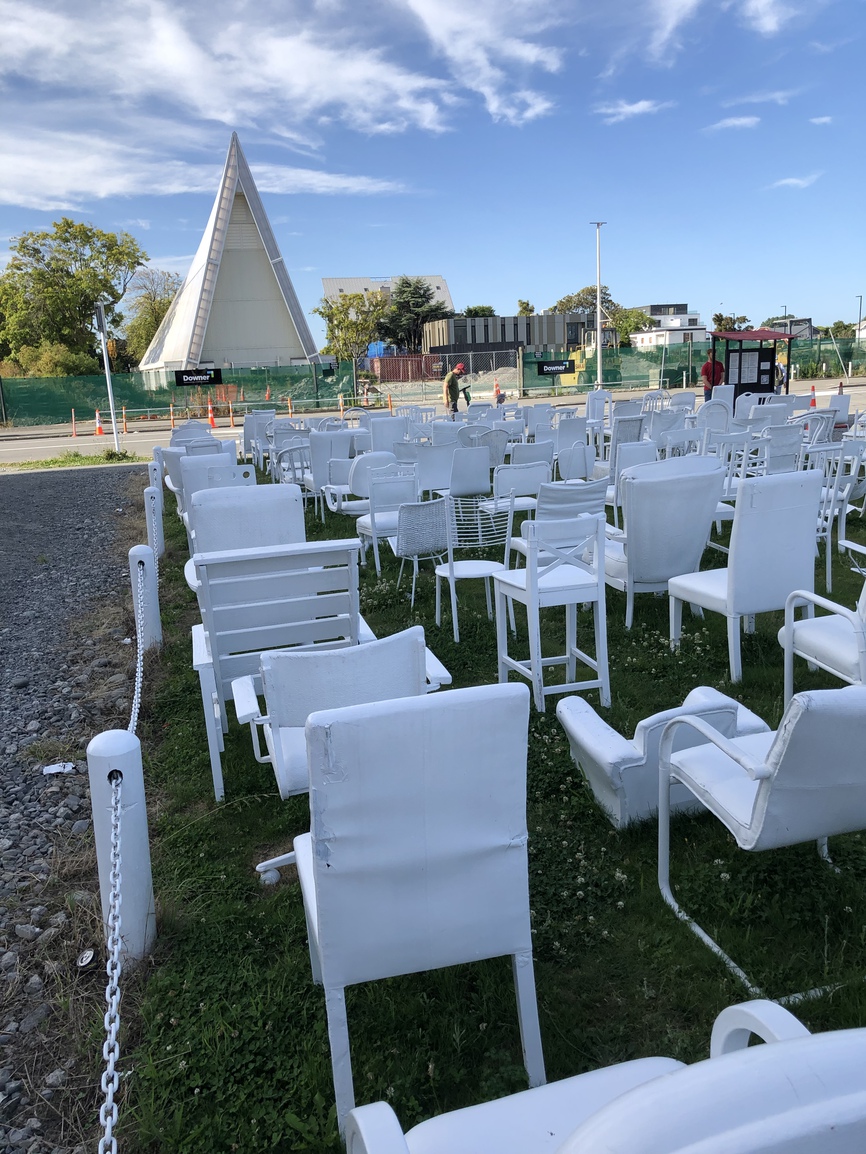 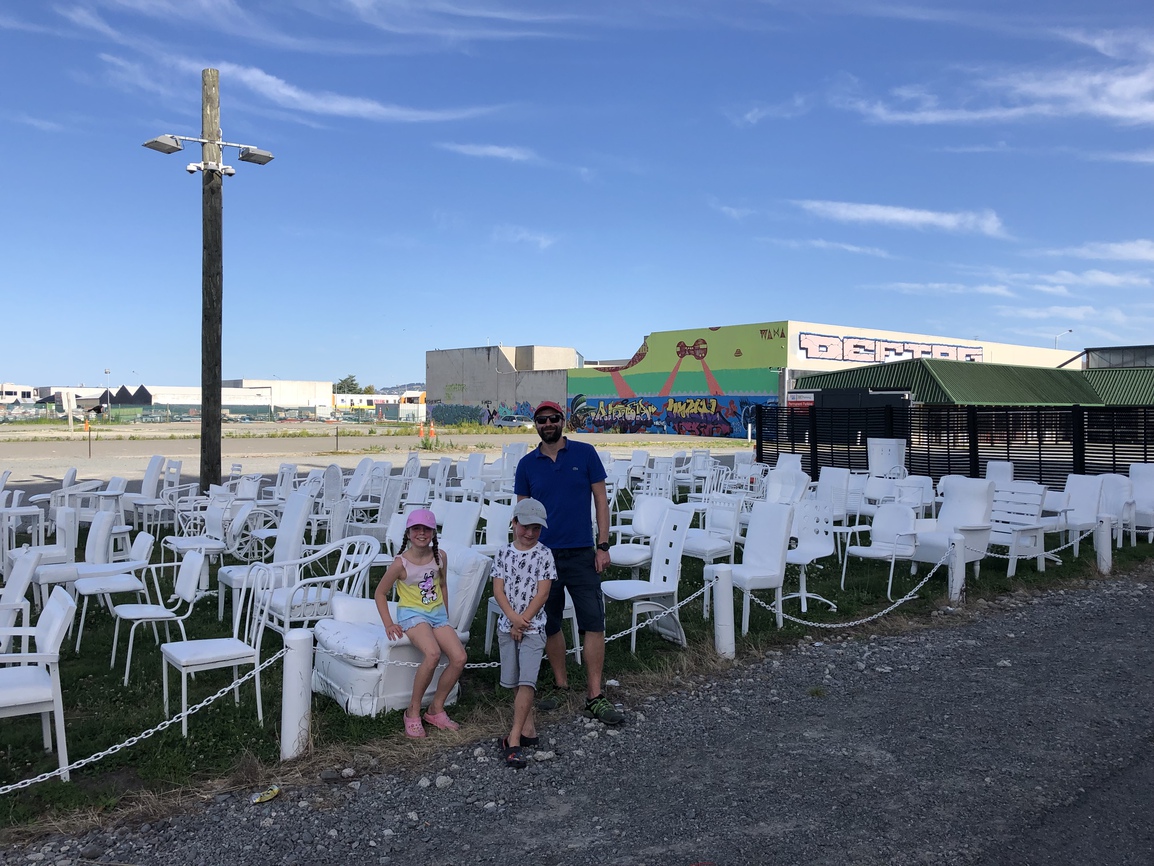 We passed the temporary Cathedral which is apparently made from cardboard and enjoyed looking at the outside seating for the congregation. 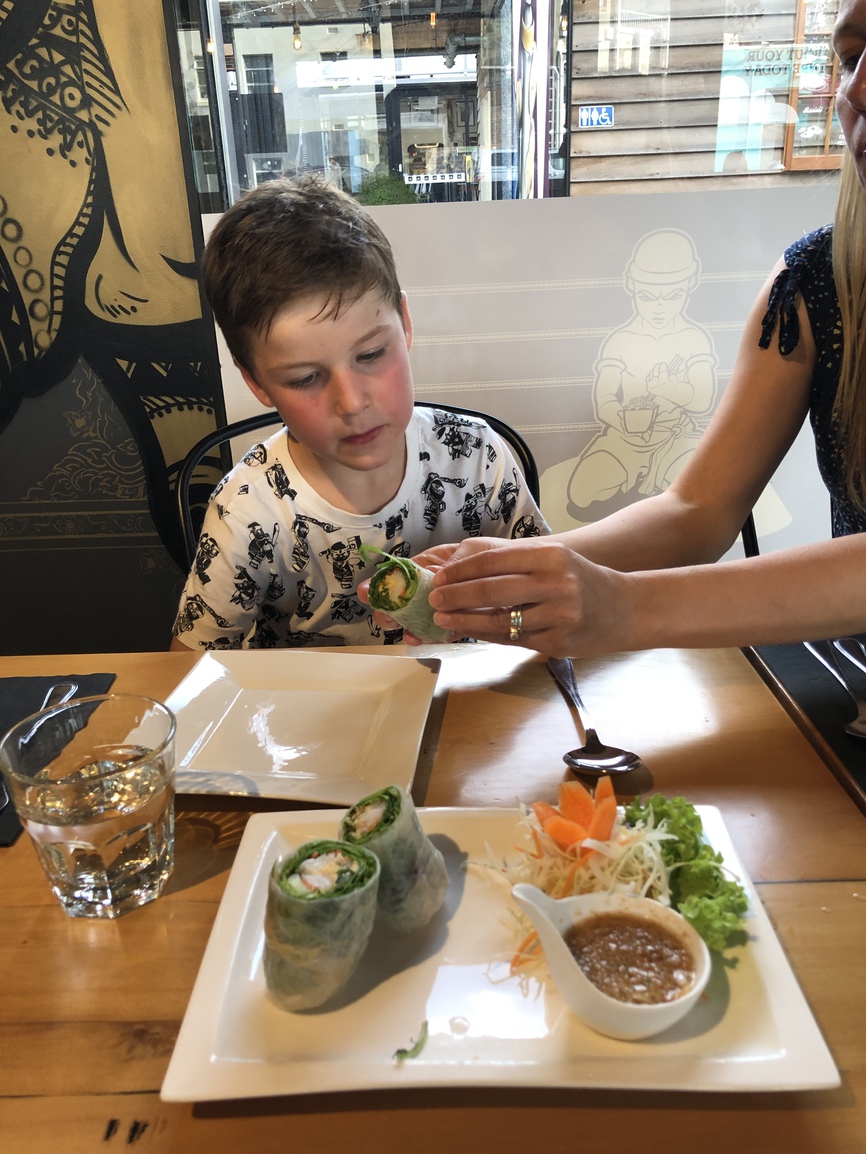 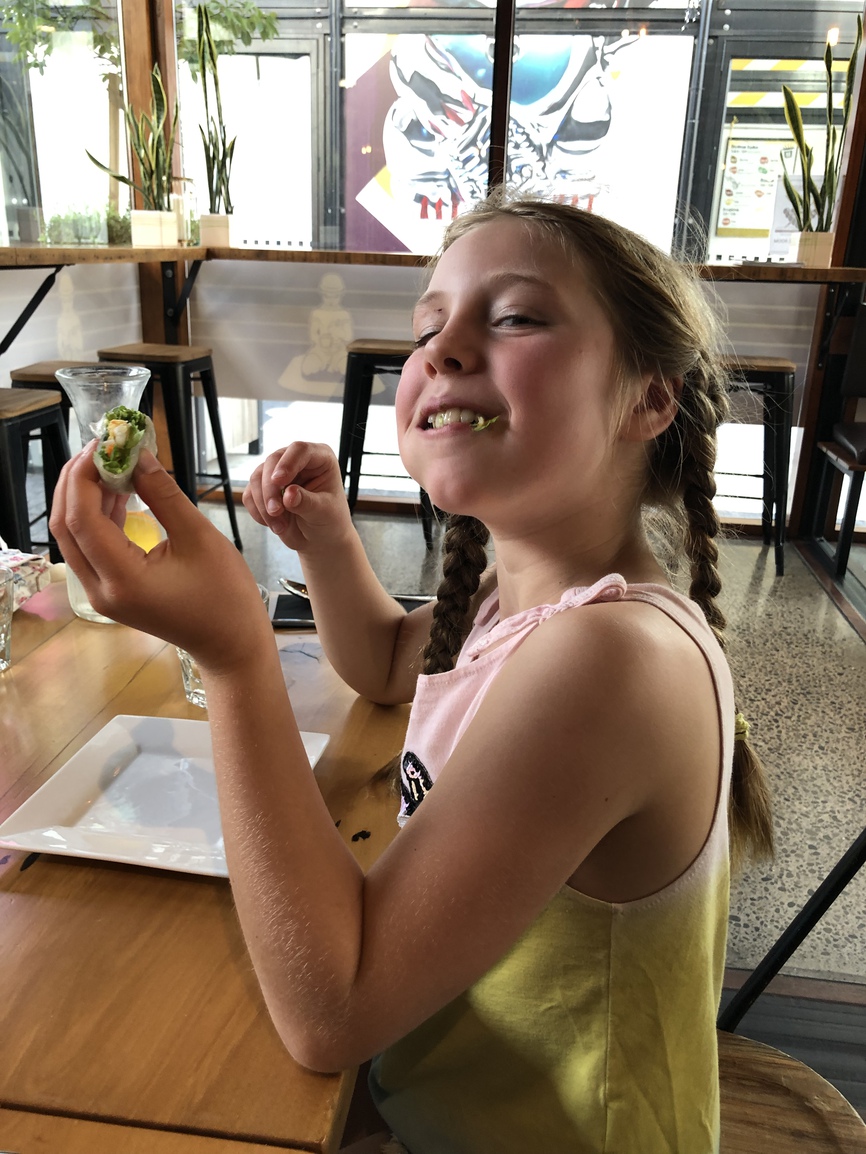 We had a pleasant meal at the Thai restaurant, the kids both tried summer rolls for the first time. The restaurant was just around the corner from our apartment so we went to bed for an early night. We were all feeling really tired! It was a little sad to say goodbye to the camper as we’ve had such a wonderful time over the last few weeks but there’s always another adventure another time.

Tomorrow we explore Christchurch during the day and then board our first of three flights back home in the evening.