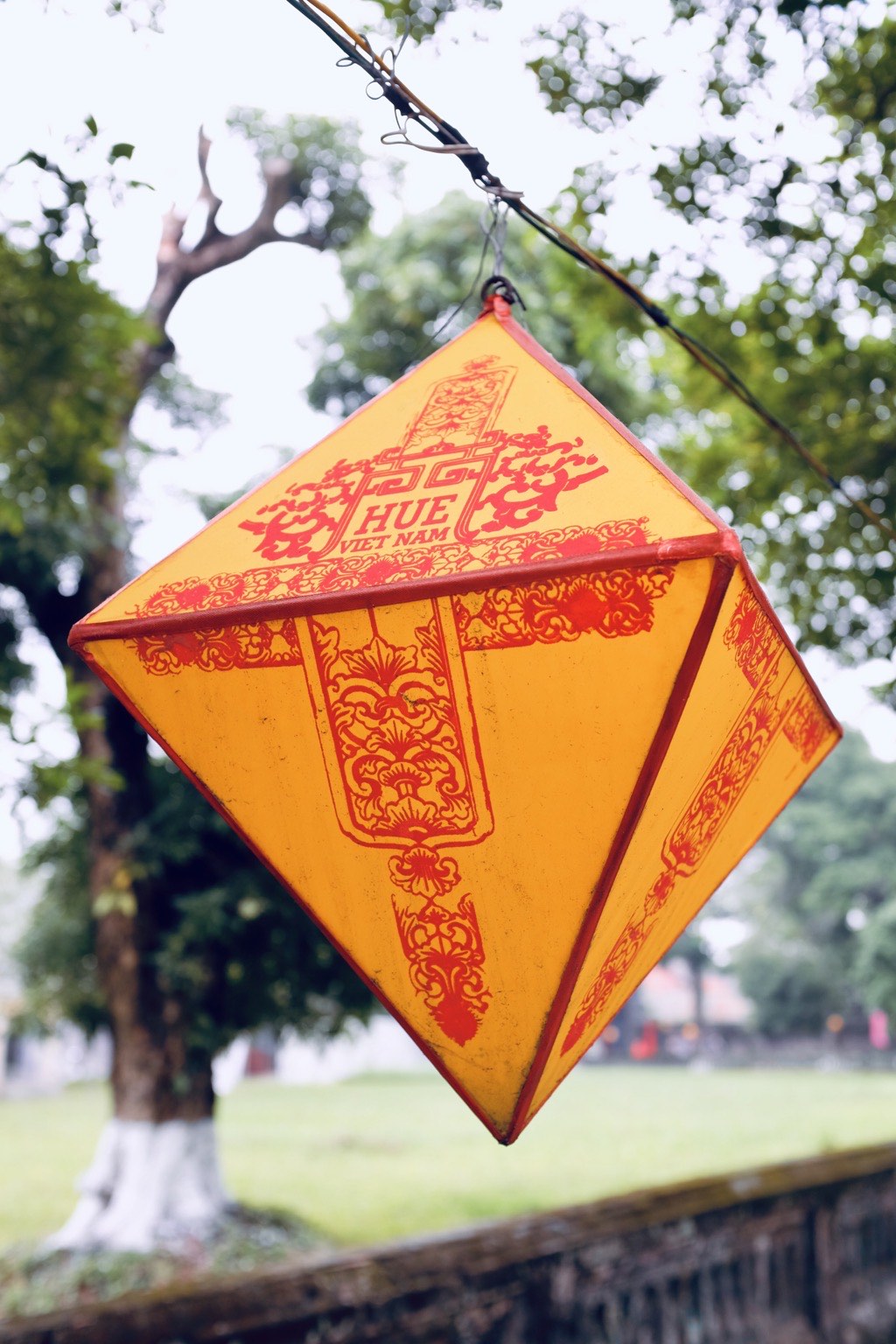 The announcements continued throughout the night, thankfully they were shorter than the earlier set, but no quieter unfortunately. Not a great nights sleep for the family, apart from Alex who slept like a log! It was a great experience however and we all really enjoyed it. 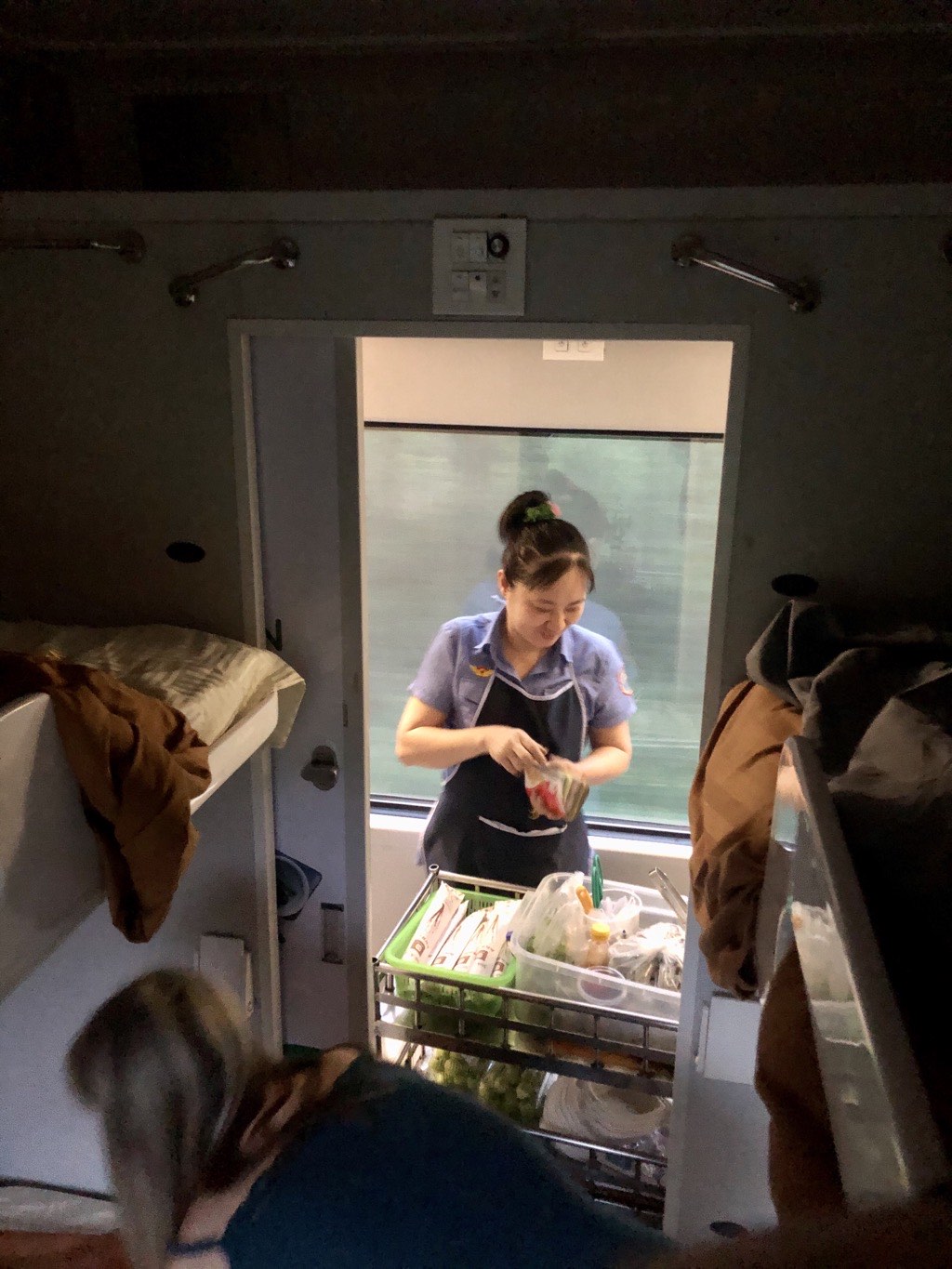 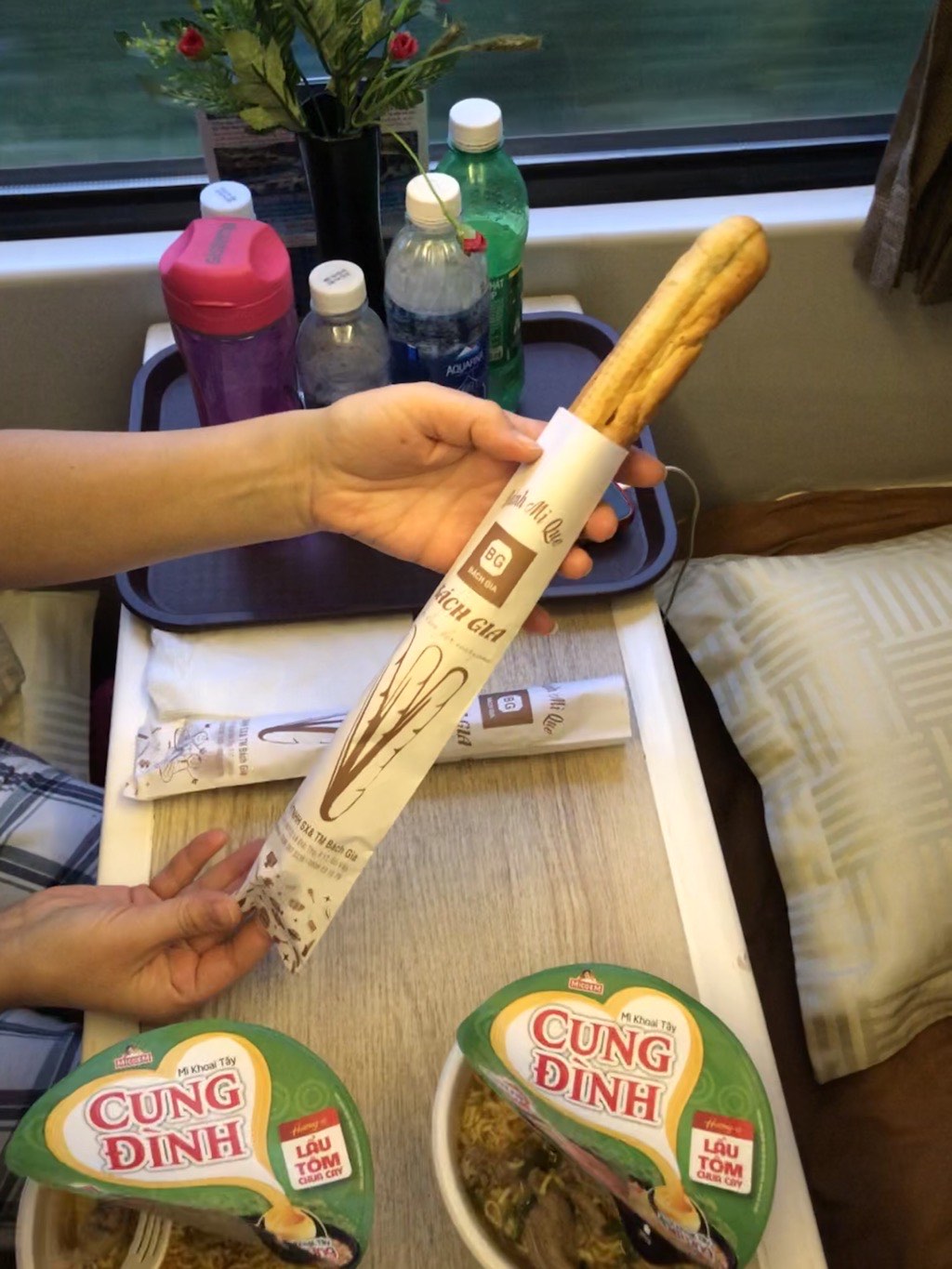 We breakfasted from the trolley on instant noodle Pho with beef, a tiny baguette with some kind of savoury filling and strong Vietnamese coffee which we drank through straws. It was very welcome to wake up to some hot food as it became quite cold early in the morning. 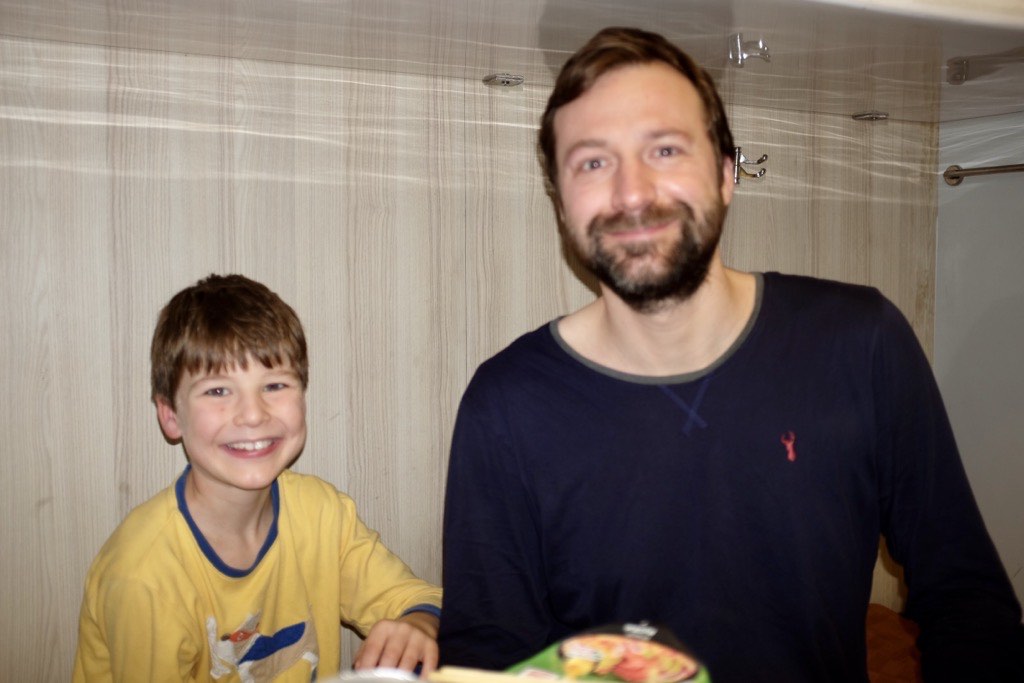 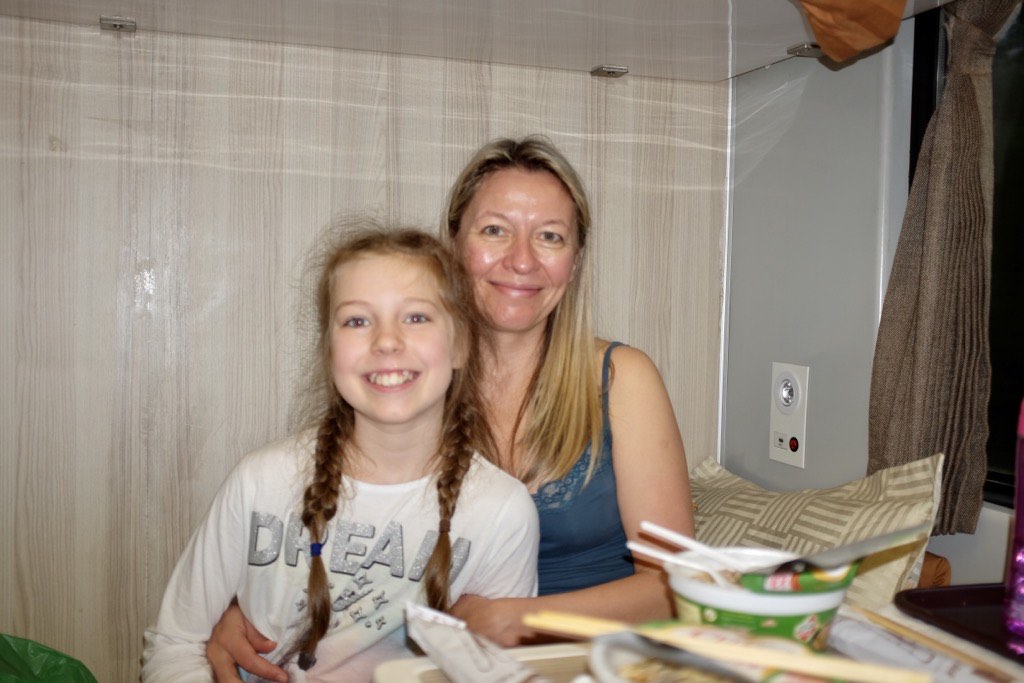 We arrived into Hue station around 8am and were immediately ushered into a waiting coach which took us to our hotel and another ‘day room’. The weather has become quite fresh and it’s rained over night which is a welcome break from the clammy weather of the last few days.

Hue is much smaller than Hanoi and only 400 thousand people as opposed to 8 million. The streets are also wider which makes the city feel much more relaxed and open.

After a quick shower and change we’re back at the hotel lobby for our sightseeing tour of the city. Today we’re going to visit the Imperial City and the tomb of the third emperor, Thieu Tri. 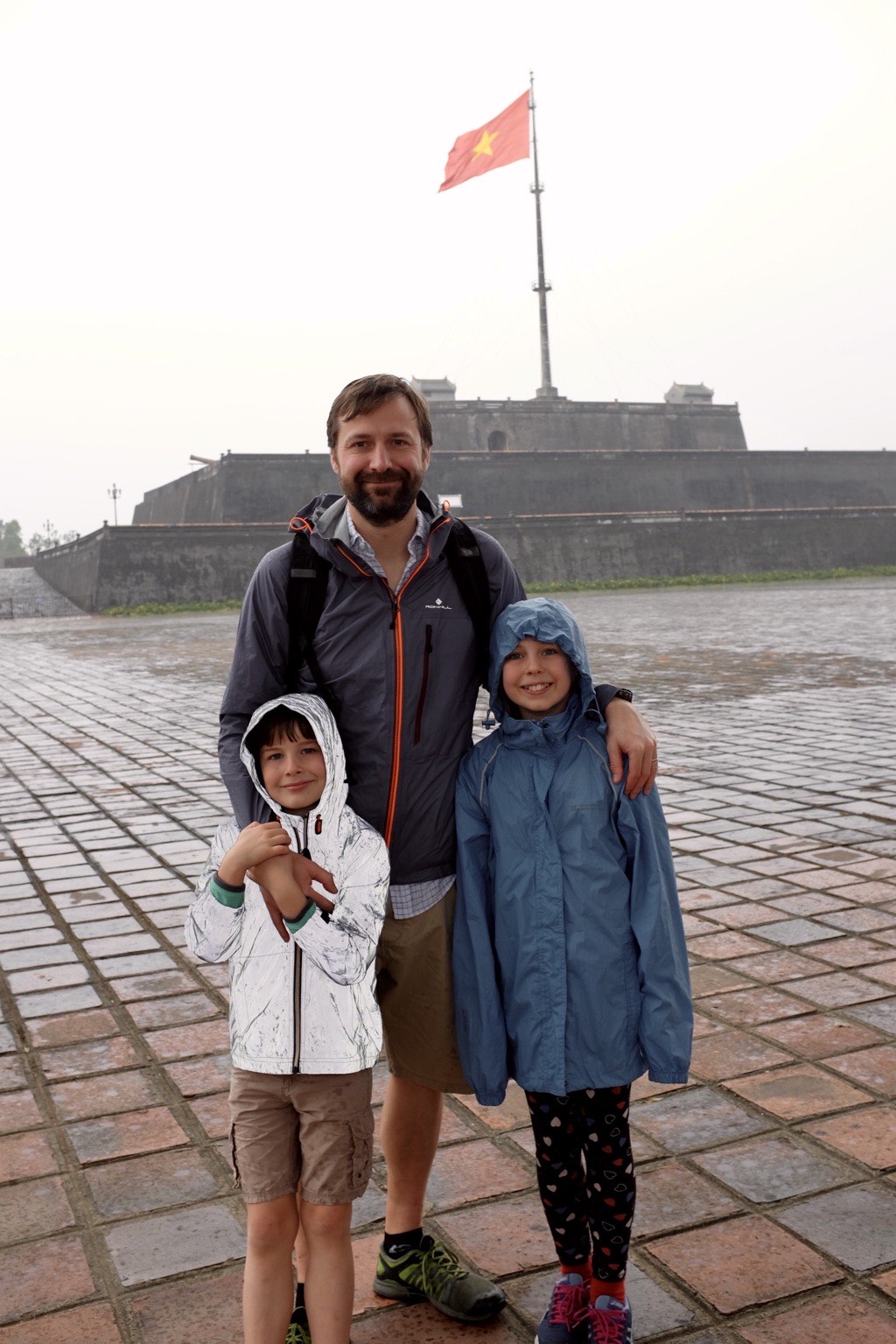 Unfortunately much of the Citadel and Palace was bombed during the Vietnam war and so far has only been partially reconstructed. We sit and watch a video of a digital reconstruction which demonstrates just how much they have left to rebuild. 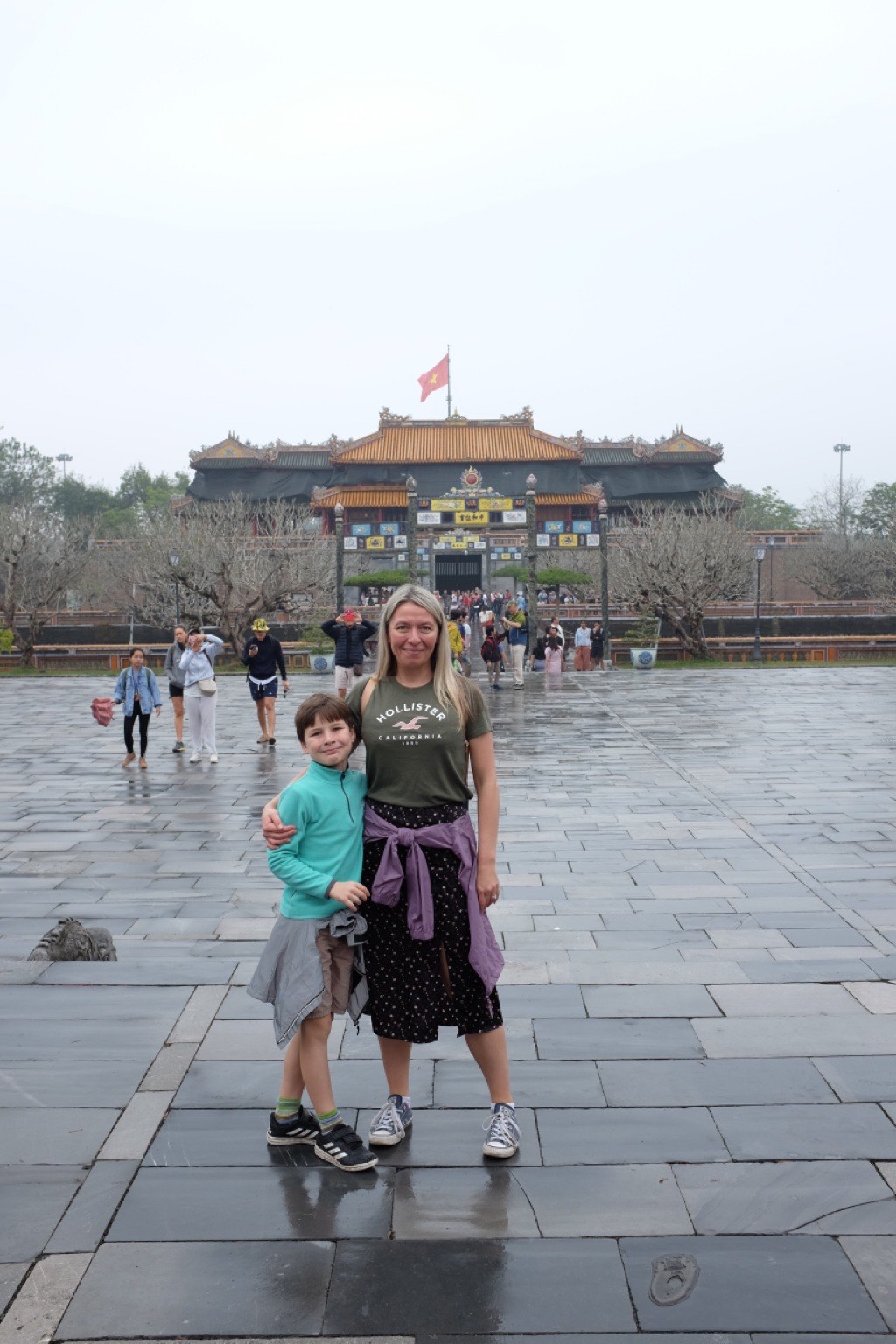 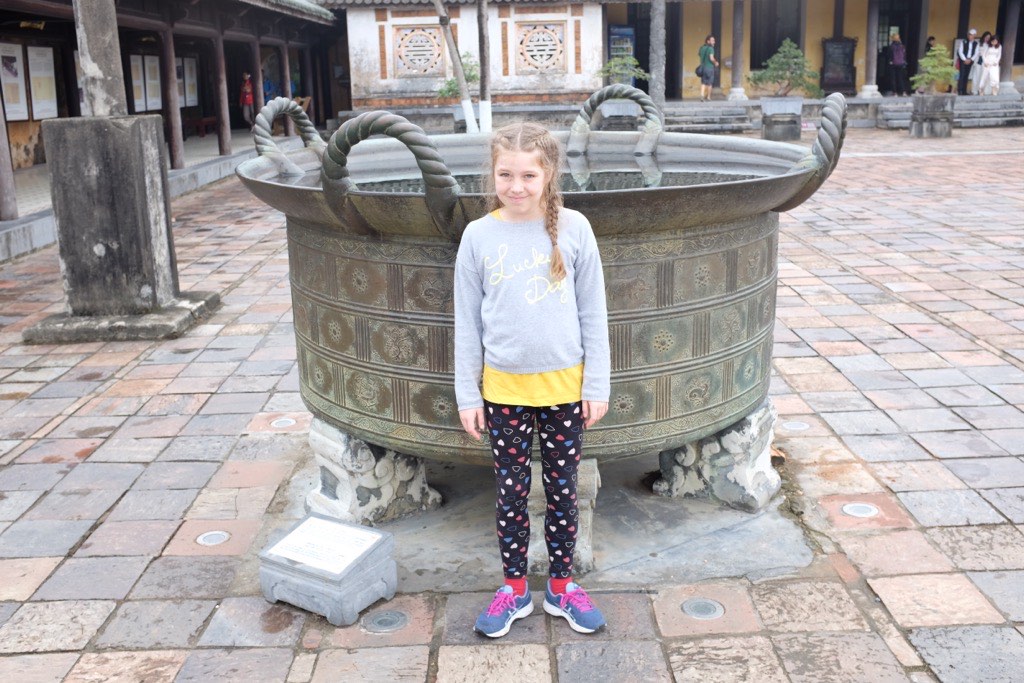 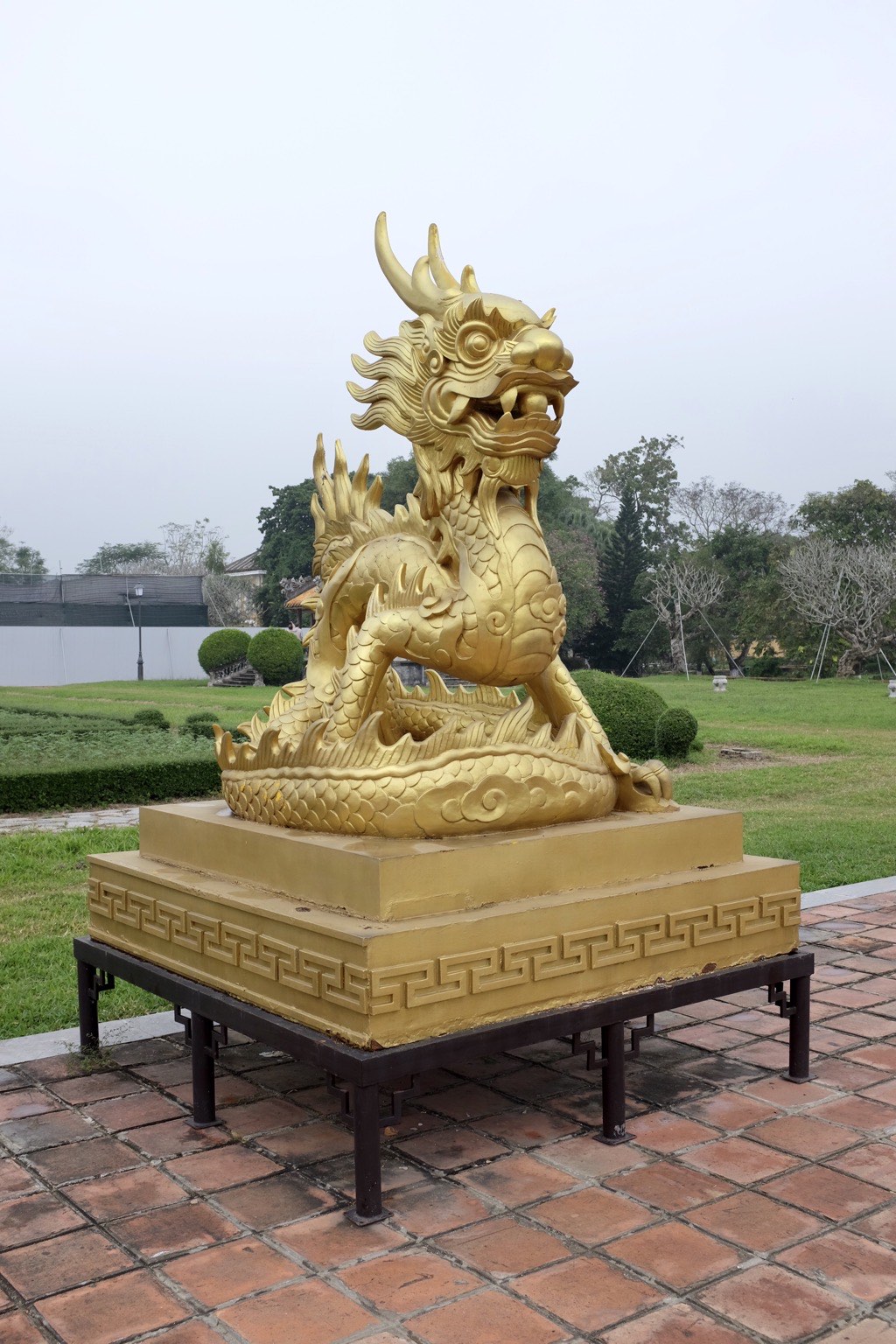 The grounds are filled with objects influenced by Chinese dynasties and wouldn’t have been out of place in The Forbidden City in Beijing.

Mandarin characters are everywhere which is understandable given that Vietnam was under Chinese rule for around one thousand years. If it wasn’t for French and Portuguese missionaries translating the spoken language into roman phonetics, the Vietnamese would probably still be using Mandarin characters today. 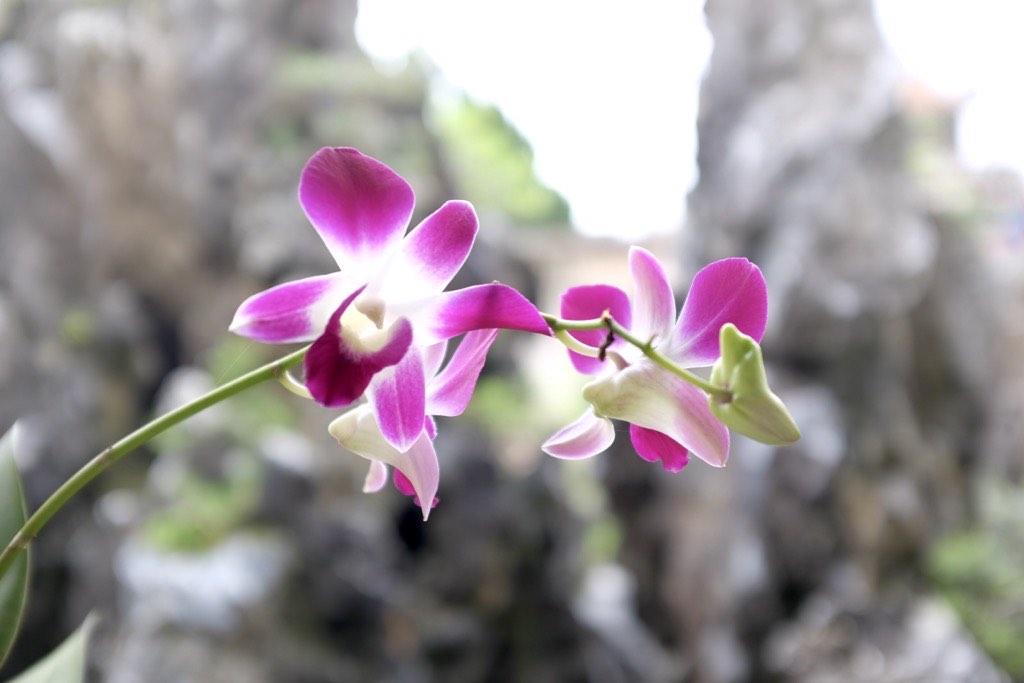 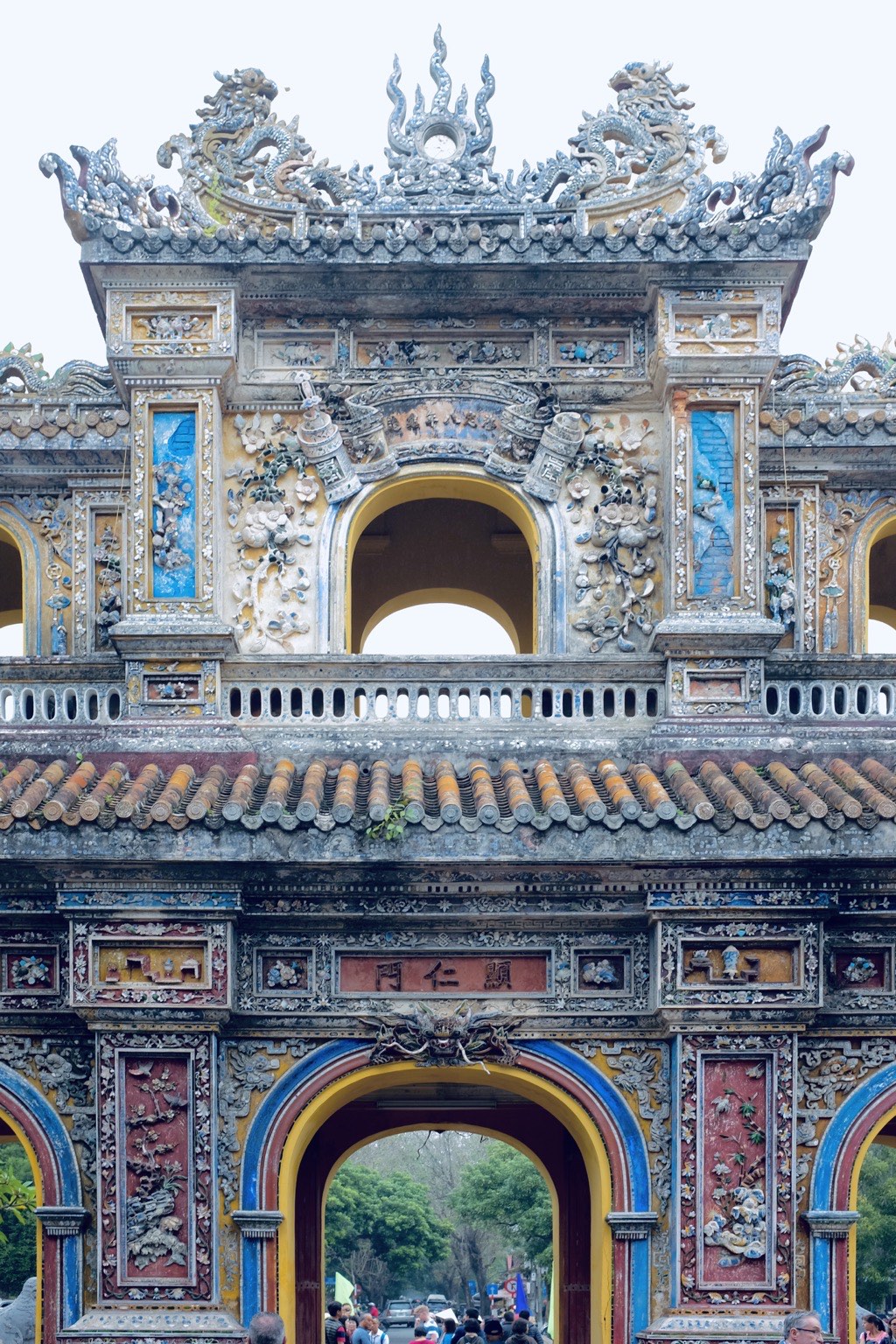 We leave the complex via an ornate and brightly coloured gate which looks like a fusion of Chinese and local design. 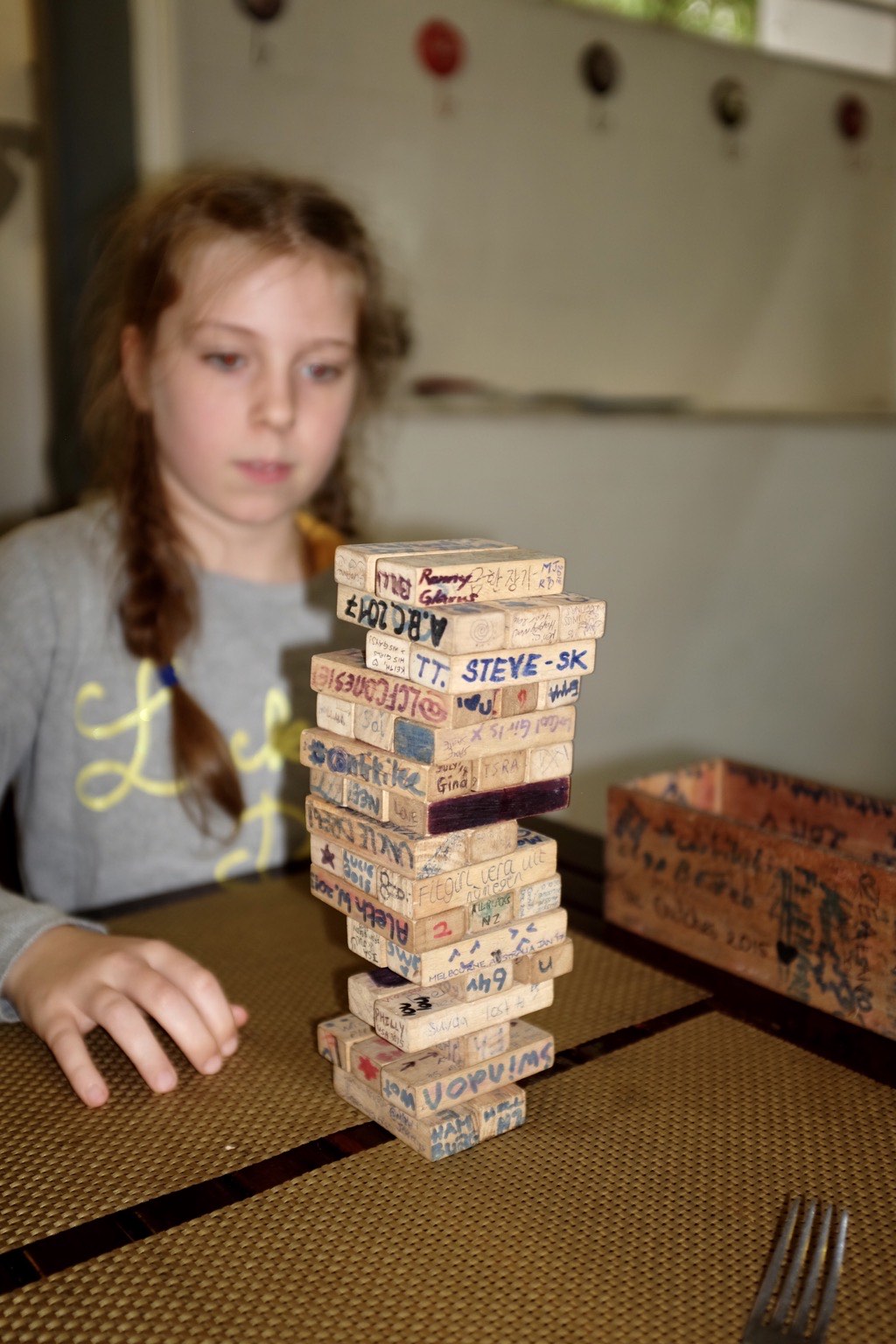 After the Imperial City we stop for lunch and try the local delicacies which are fried chicken pancakes and minced pork on skewers. It’s of course all delicious as nearly every meal has been thanks to our guide. The kids opt for pizza and keep themselves occupied with Jenga while they wait. Diana and I sample the local beer which is very light and crisp, perfect refreshment. 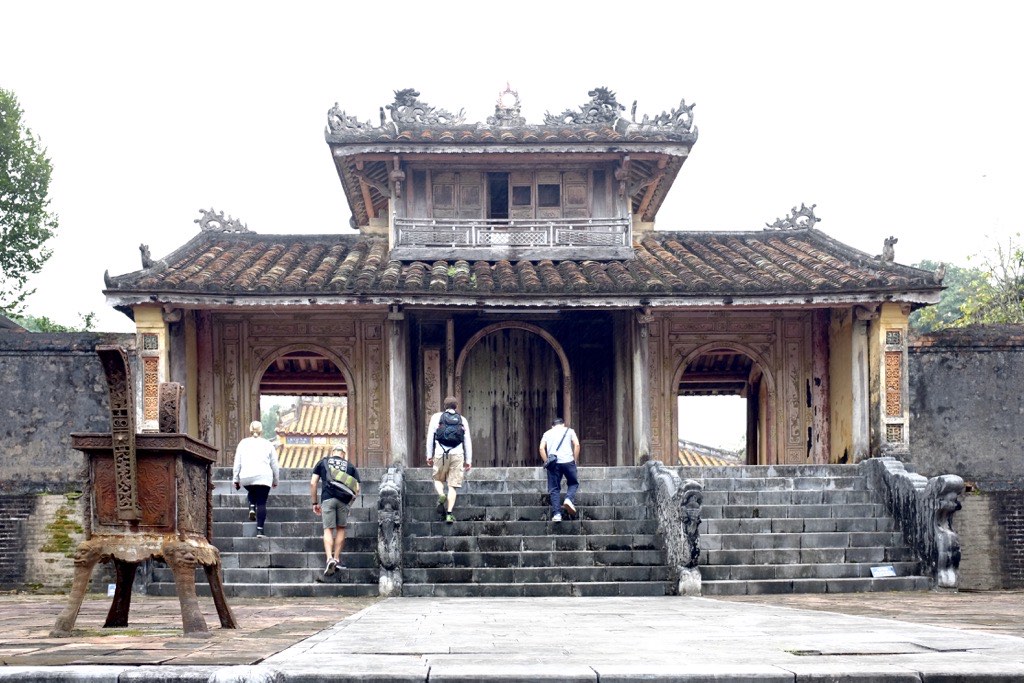 Next we take a short coach ride to the tomb of Thieu Tri, the third emperor of Vietnam. The tomb is a few hundred years old and has started to crumble but it’s interesting to explore. 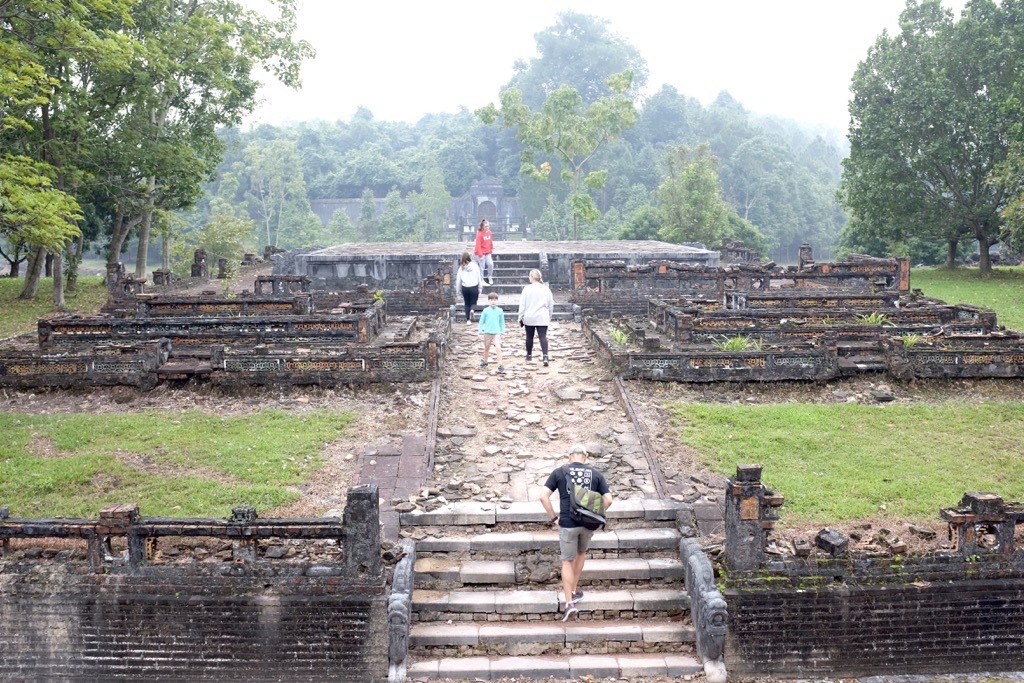 The layout is similar to the Imperial City but without a surrounding Citadel. The number of layers and positioning of gates is the same, the architecture being more modern and much less Chinese influence. 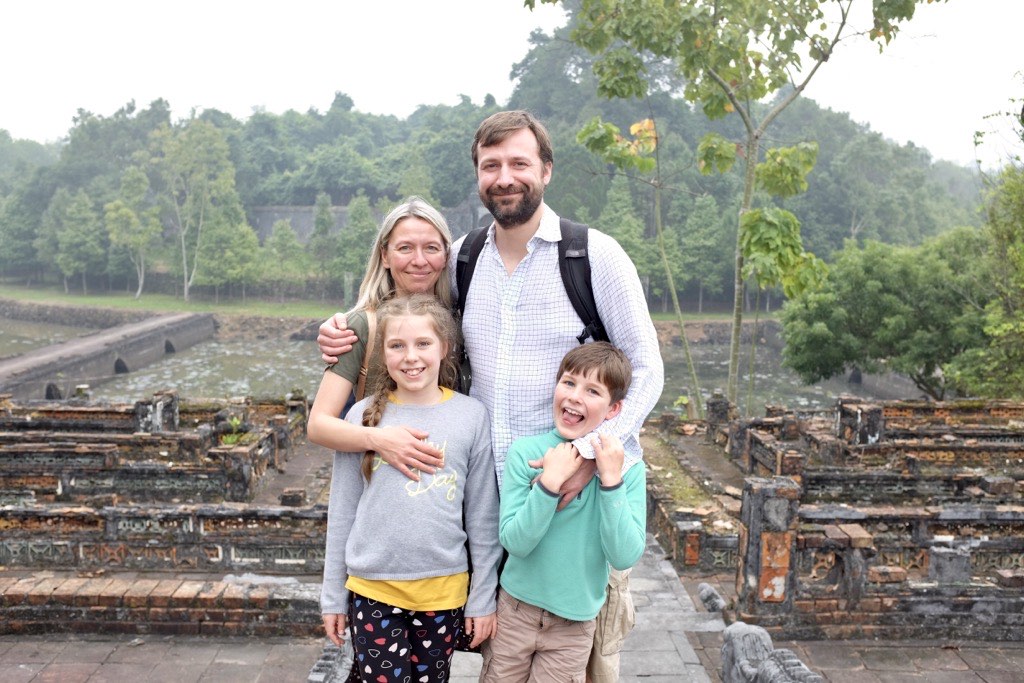 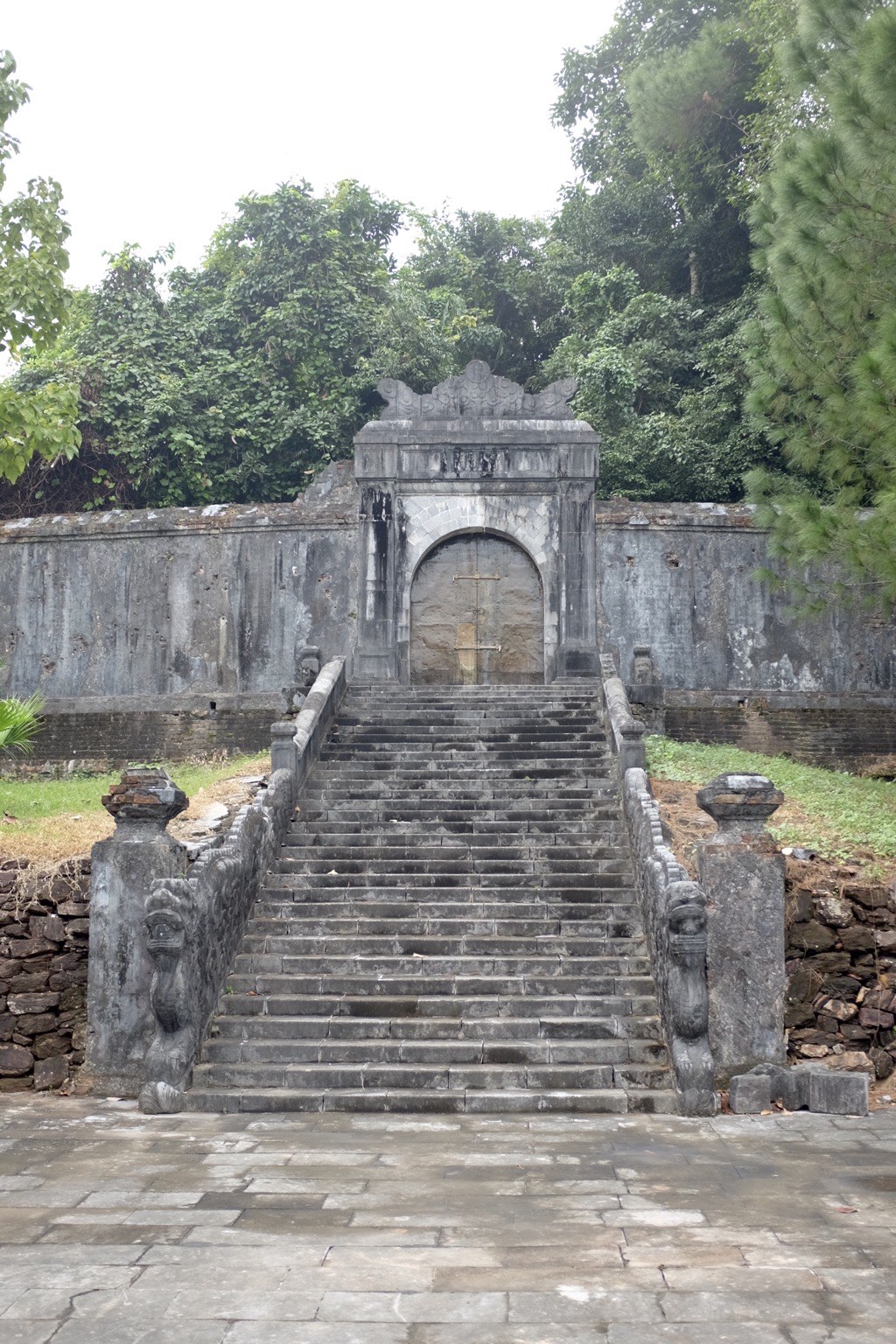 The tomb itself is only open once a year on the anniversary of the emperors death so we have to contend with a view of the gate to the inner tomb itself.

Afterwards it’s back to the hotel floor some free time before dinner.

The kids and I go swimming in the hotel pool while Diana has a foot massage at the spa. The pool is rather cold so we swim until Alex’s lips turn blue and then warm up under hot showers.

Diana and Alex aren’t hungry so they relax in the room while. Bella and I join the rest of the party for dinner in a local restaurant. We opt for duck spring rolls to start followed by off-menu noodles with chicken for Bella - we’ll have to remember that one - and duck with five spice for me. Delicious. At the beginning of the meal the restaurant and the street we’re in has a power cut which makes for an exciting candlelit start to the meal. The locals have things up and running again after ten minutes though and the food service wasn’t even interrupted.

After dinner we take a pleasant walk back to the hotel and off to bed.