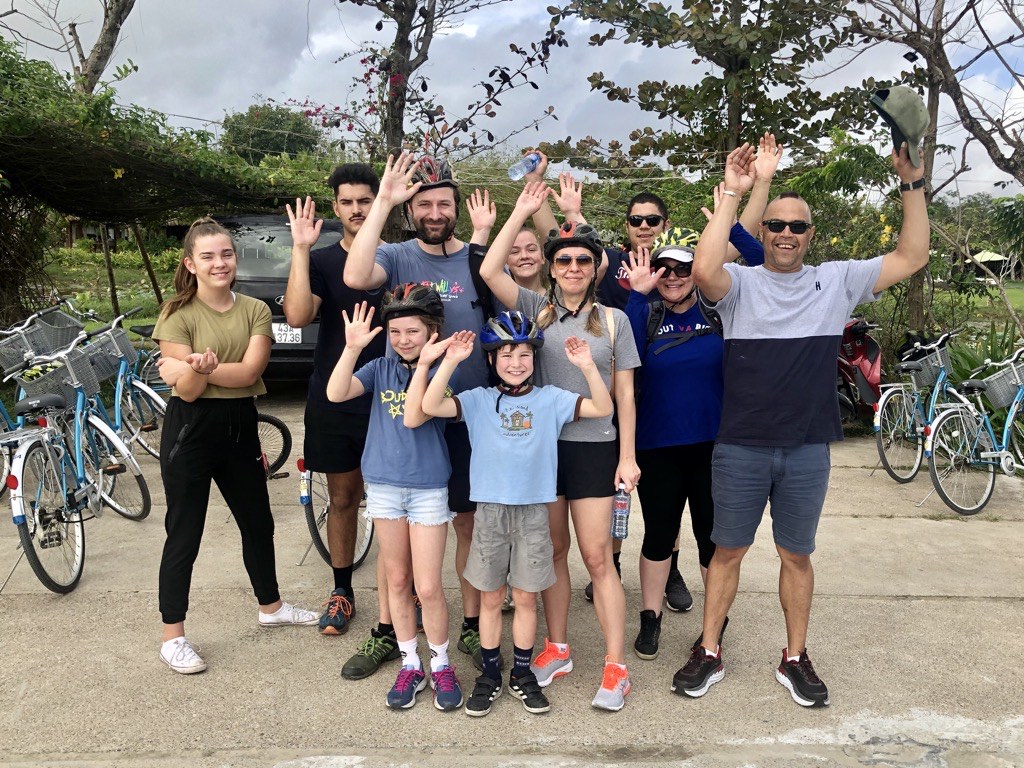 Our last day in Hoi An. We took a cycle tour in the morning and explored the old town in the afternoon. 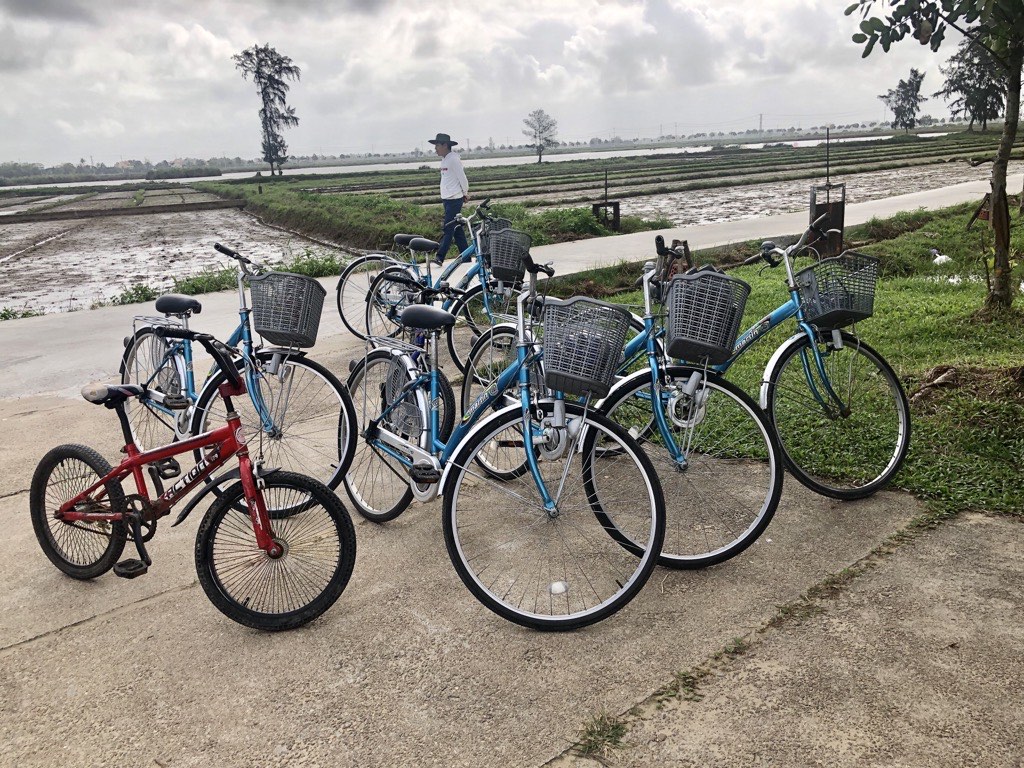 The cycle tour guide met us at the hotel with bikes for everyone. Once we’d got sorted and had a quick test ride along the street outside the hotel, we were off.

The first busy road crossing not far from the hotel was a little hairy but once that was over with we were straight into the countryside and small backstreets. The first part of the tour was through farmland and a visit to an organic vegetable farm. 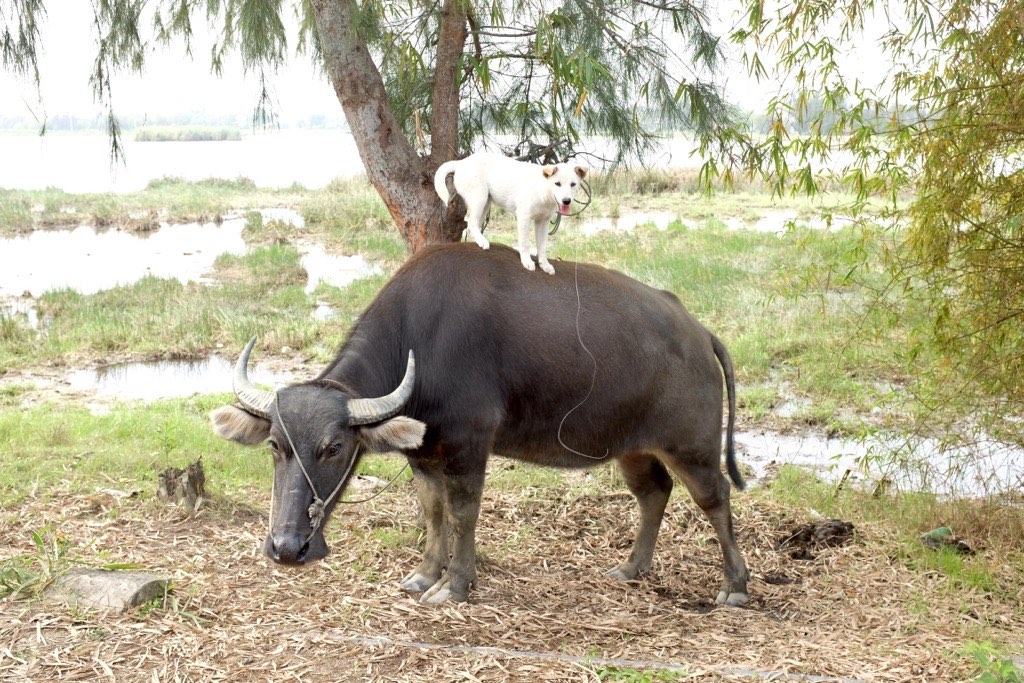 Most of the fields were rice paddies and some farmers used tractors while others used buffalo or worked the soil by hand. 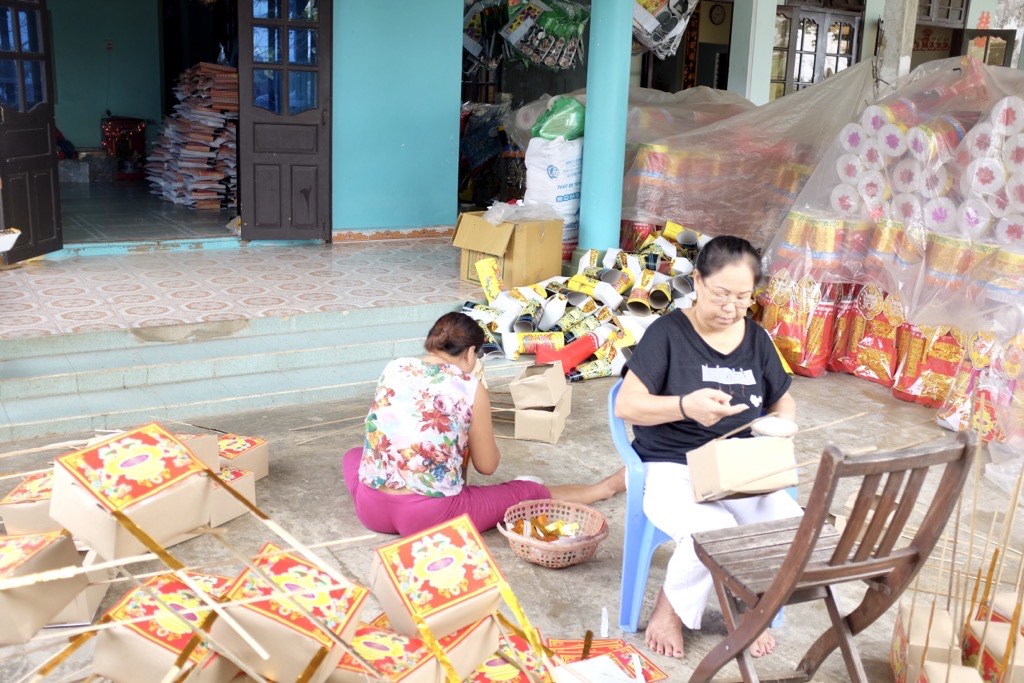 On the way to the vegetable farm we stopped at a little cottage industry which was making sacrifices for the forthcoming lunar new year. Many objects are burnt as sacrifices in order to send the objects to their ancestors. All sorts of goods are made from paper and card specially. This family were making paper clothes, boots and shrines which they’ll take to market to sell. 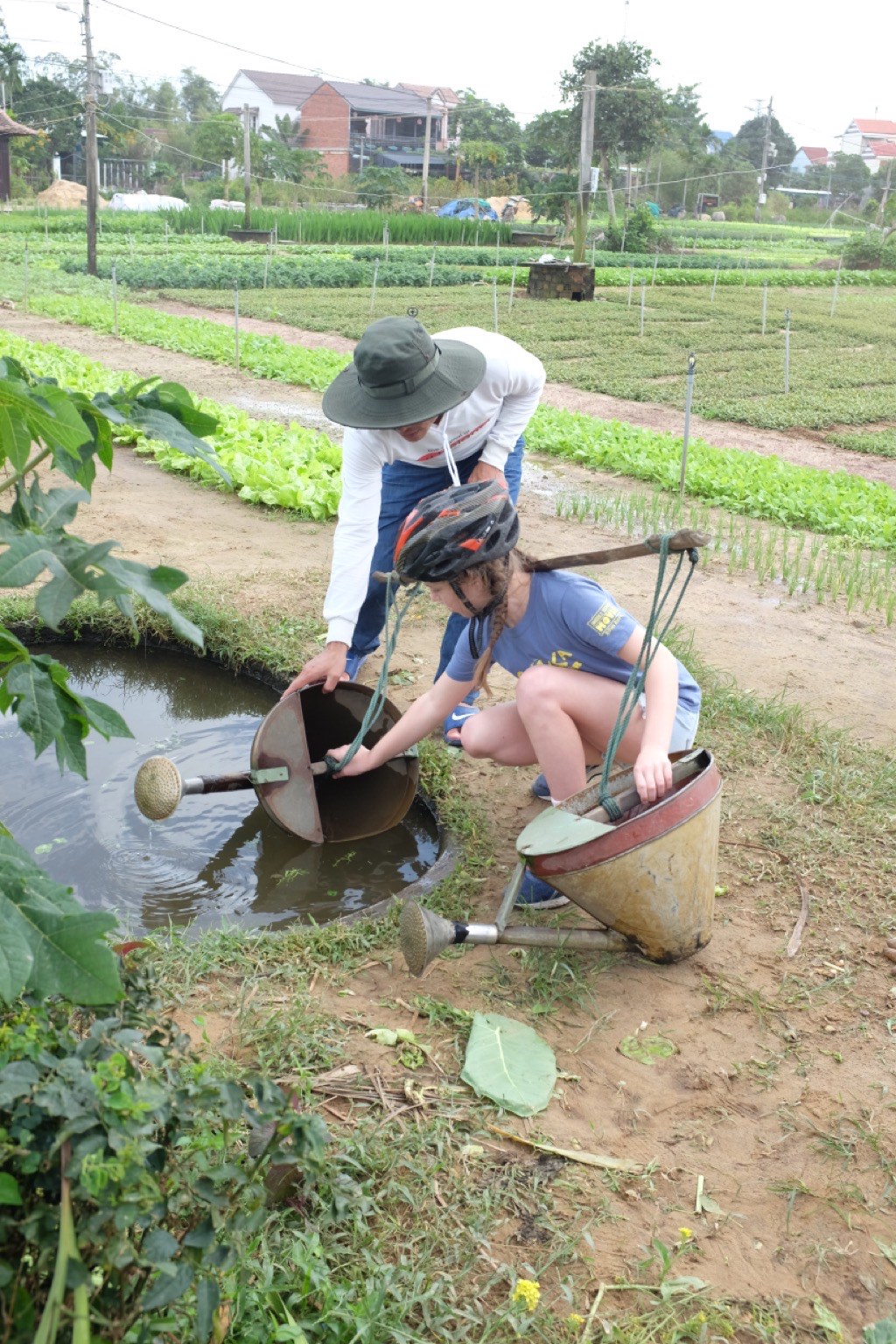 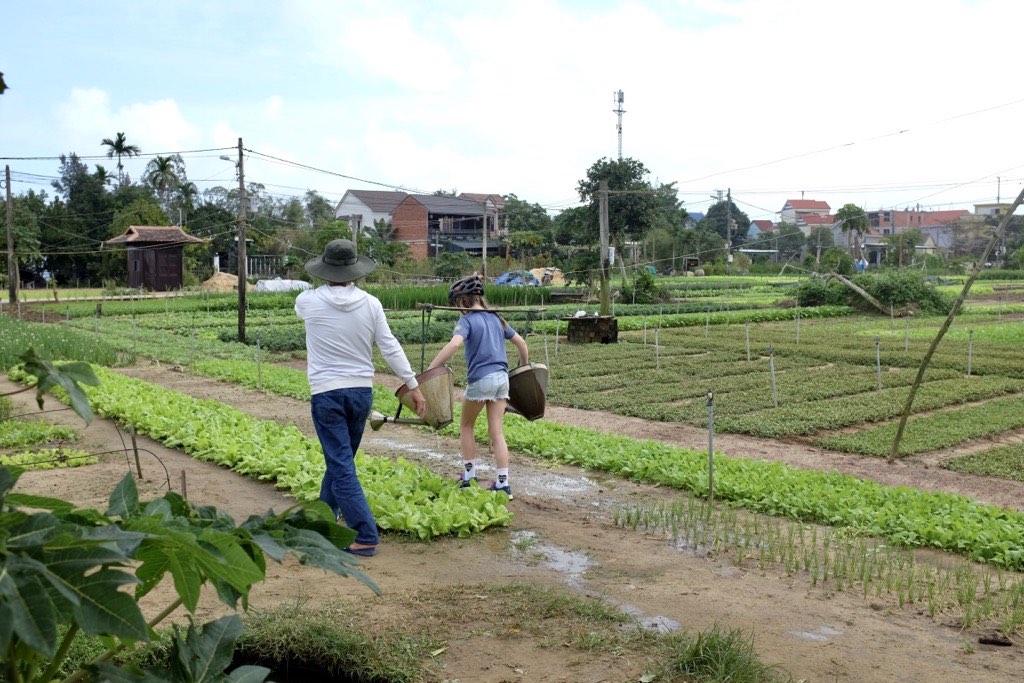 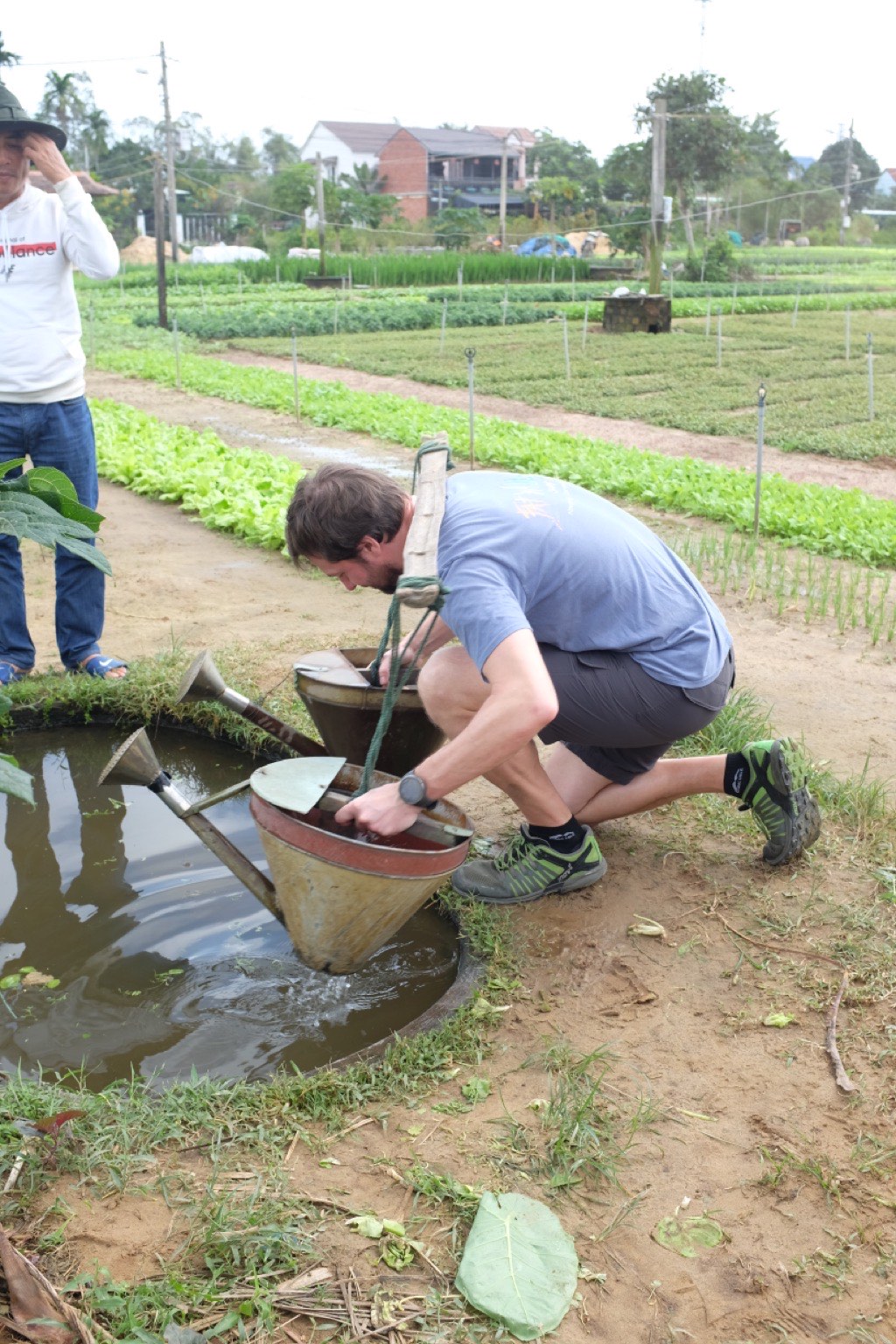 The next stop was the vegetable farm which is completely organic and very neatly organised. They were growing all manor of vegetables and herbs used in Vietnamese cooking. These days they have a sprinkler system but before that they used shoulder mounted watering cans which we tried out.

We got back on the bikes and headed to a fishing village for the second part of the tour. 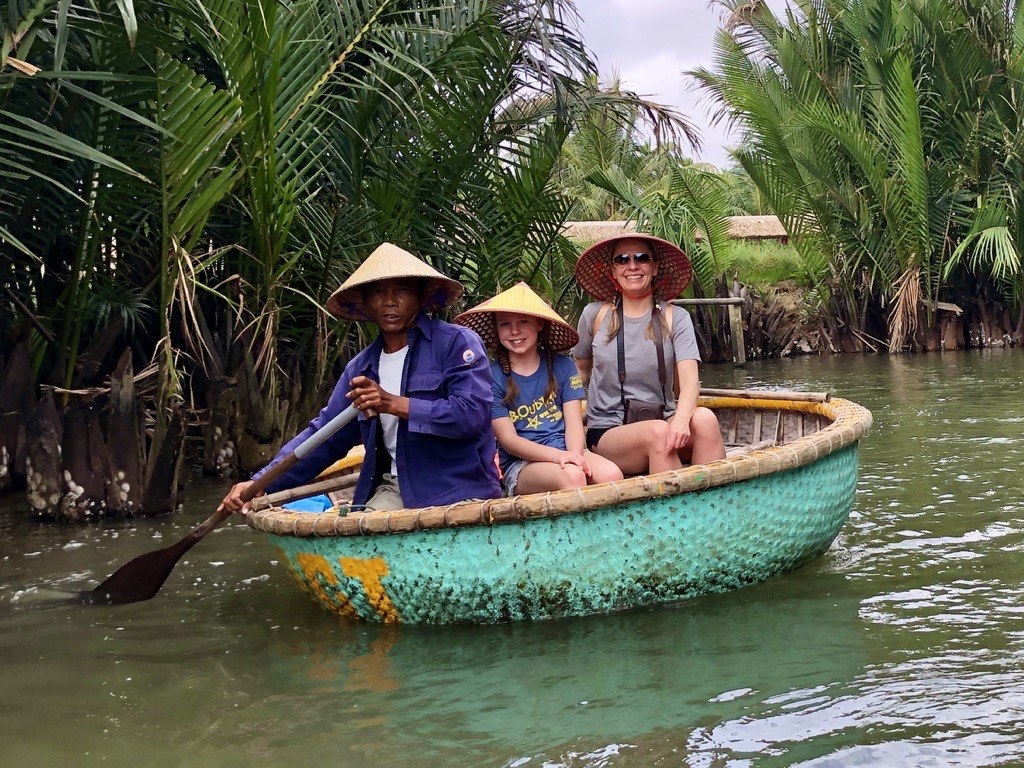 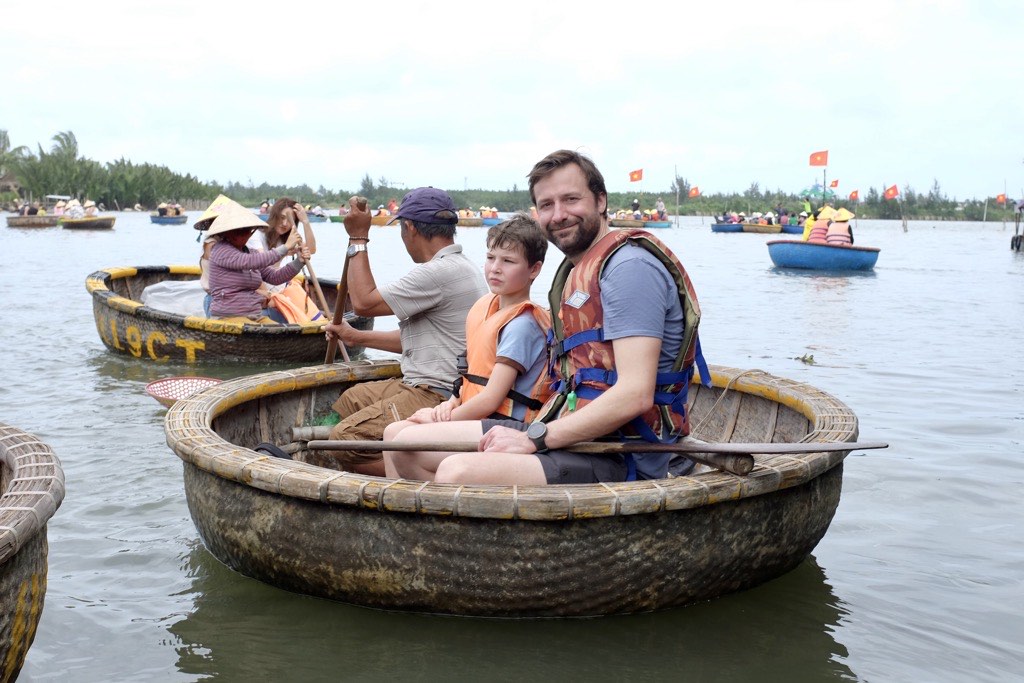 Once we’d arrived at the village we stopped for a refreshing drink and then got into circular banana leaf boats for a tour of the waterways.

The boat owners are all very jolly, joking with their mates, splashing water and generally having fun. We row along the river for a while before we turn into a small waterway through a banana grove. 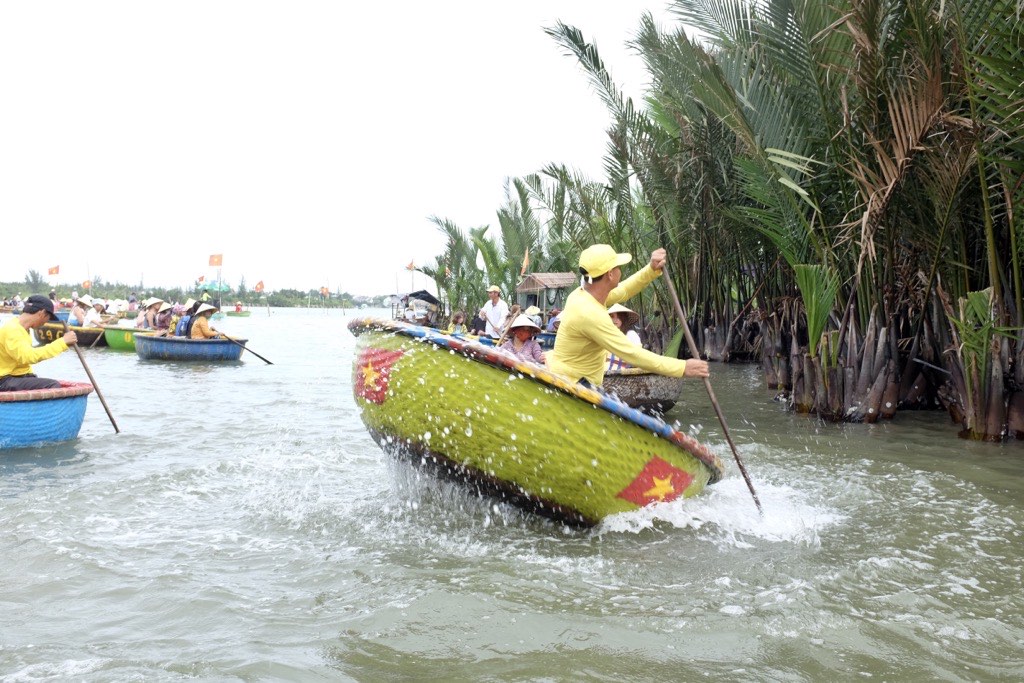 In the middle of the banana grove is a larger area of water which has music pumping and some boat pilots putting on a show. They twirl their boats about madly and rock them from side to side which is fun. Any tips are passed to them by sticking the money to a wet oar.

We head back to dry land and cycle to the river where we get onto a boat with the bikes. The boat takes us close to the old town where we climb off and we spot a nice looking restaurant on the waterfront for lunch.

First we cycle on the streets back to the hotel, most aren’t too busy but some are and I’m amazed at how smoothly the ride goes. Since the road traffic is used to adapting to people and vehicles all over the road, a few bicycles wobbling around didn’t cause any issue. 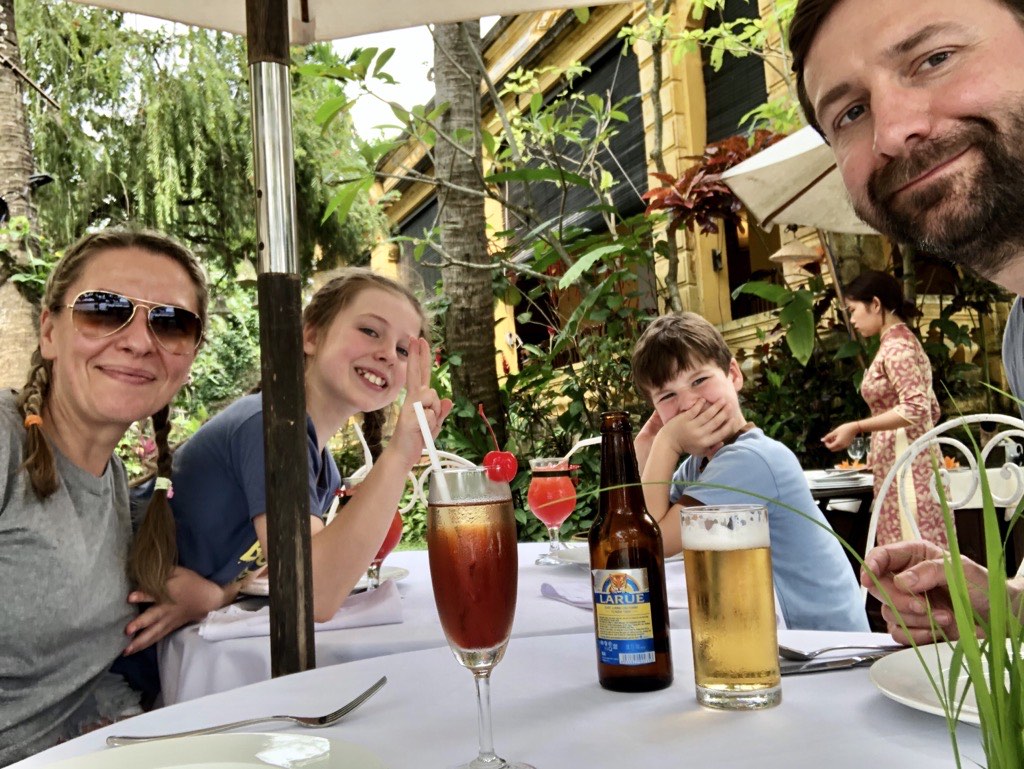 Once we returned the bikes we jumped in a taxi back to the old town to the restaurant we’d spotted earlier. We sat outside overlooking the water and relaxed with a well earned cold drink and a delicious lunch. 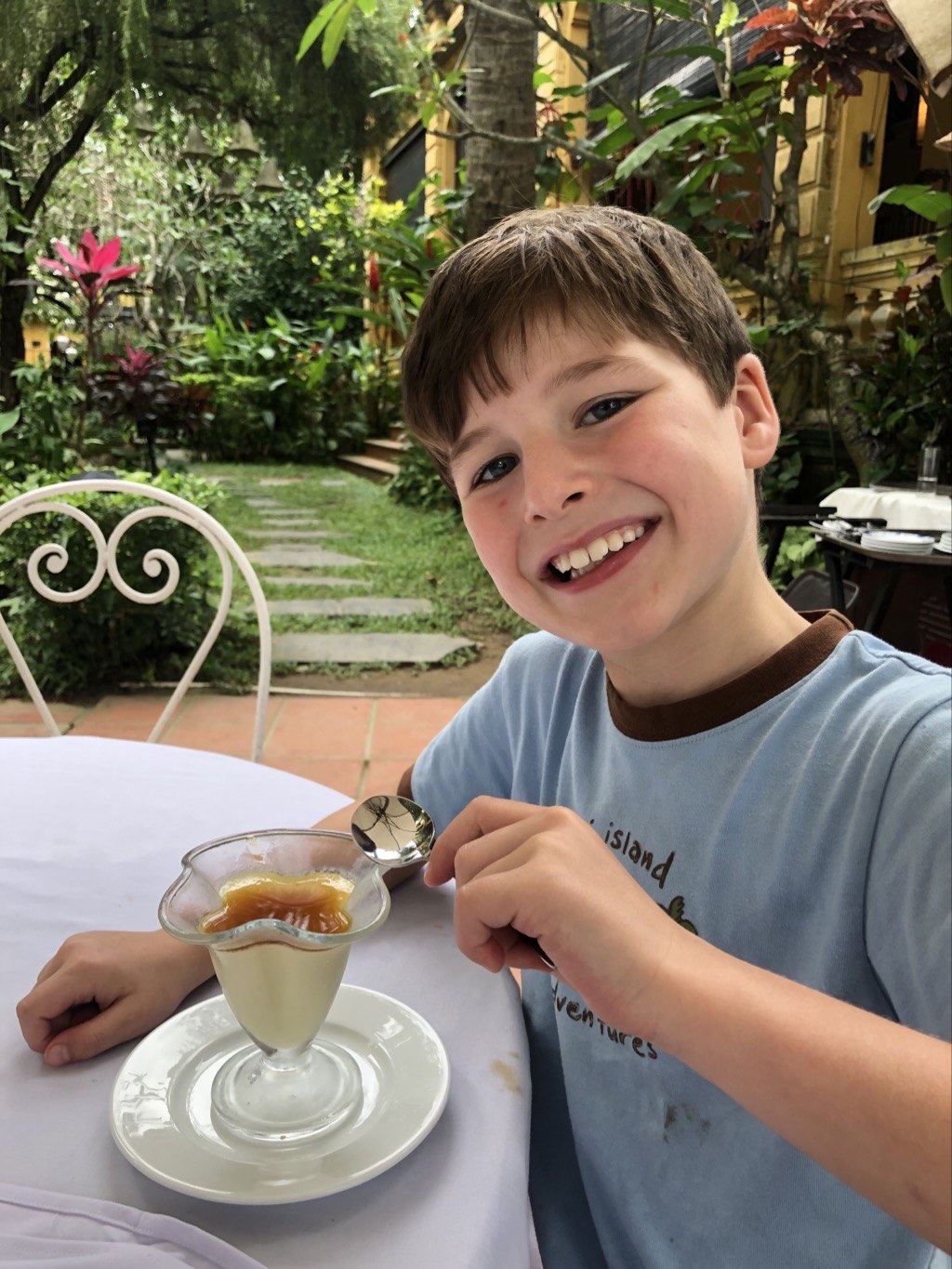 Alex has been quite adventurous with trying food this trip ever since we had the cooking class and today he ordered creme caramel which is apparently very good in Vietnam due to the French influence. 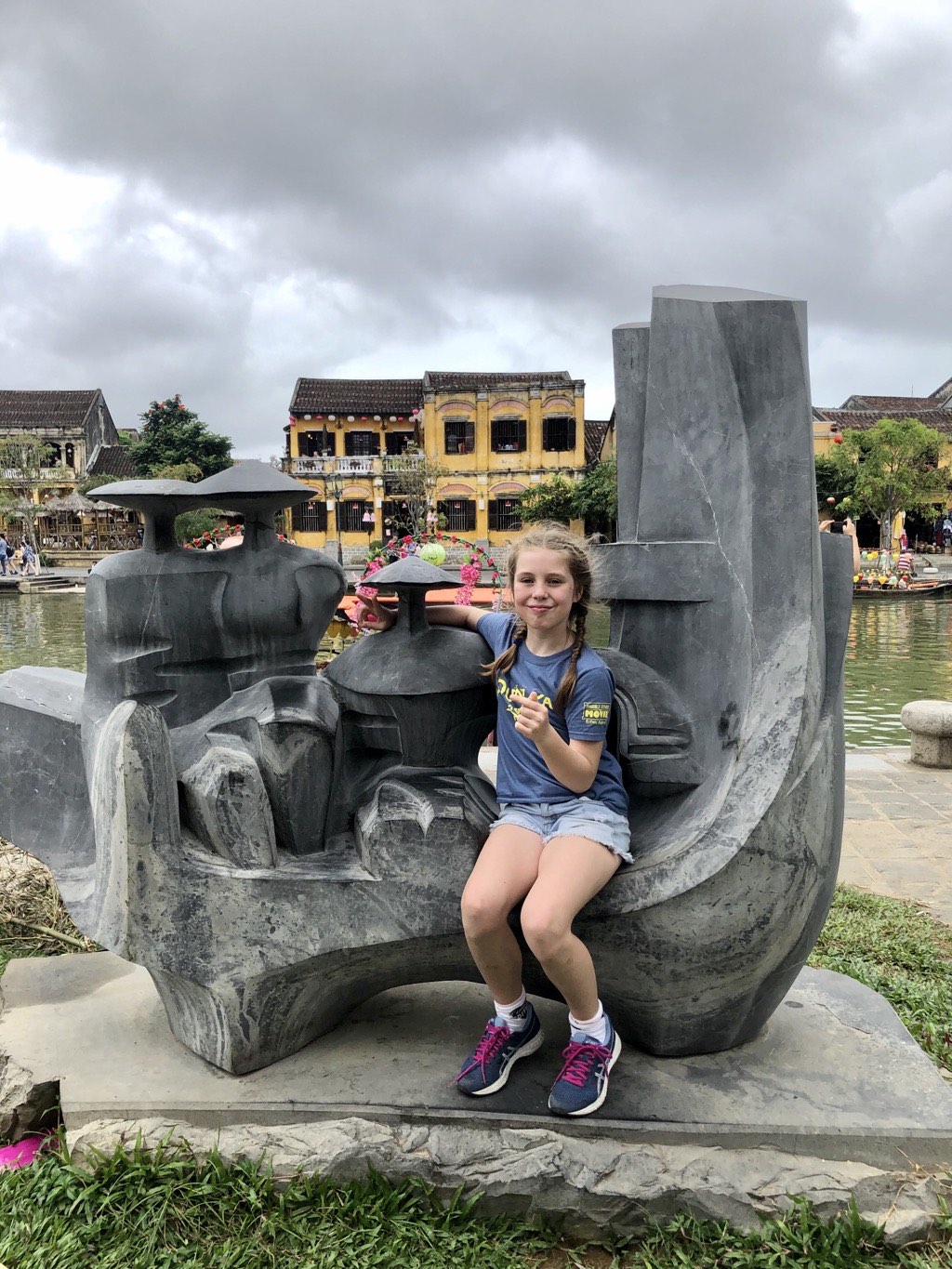 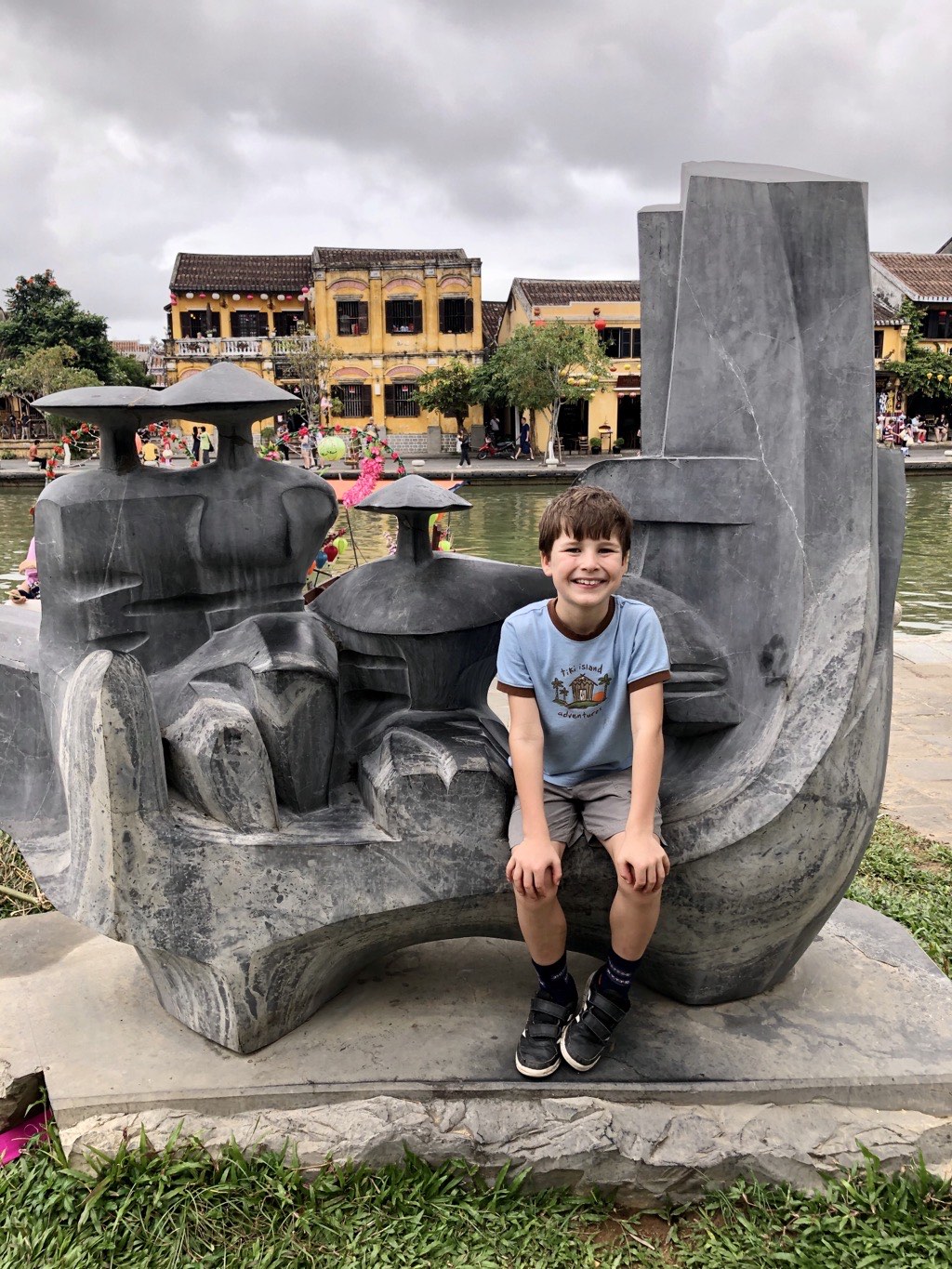 After lunch we explored more of the old town taking in the food market, tailors and leather goods shops which Hoi An is famous for.

Back at the hotel we take a nap and relax for a few hours before dinner.

Tomorrow is a 6:30am departure so we stay local for dinner and go to a Thai restaurant by the river which is highly rated. The Thai food is really good and the morning glory is best we’ve had - cooked just right with garlic, chili and fish sauce.

After dinner it’s back to the hotel to pack and get an early night.