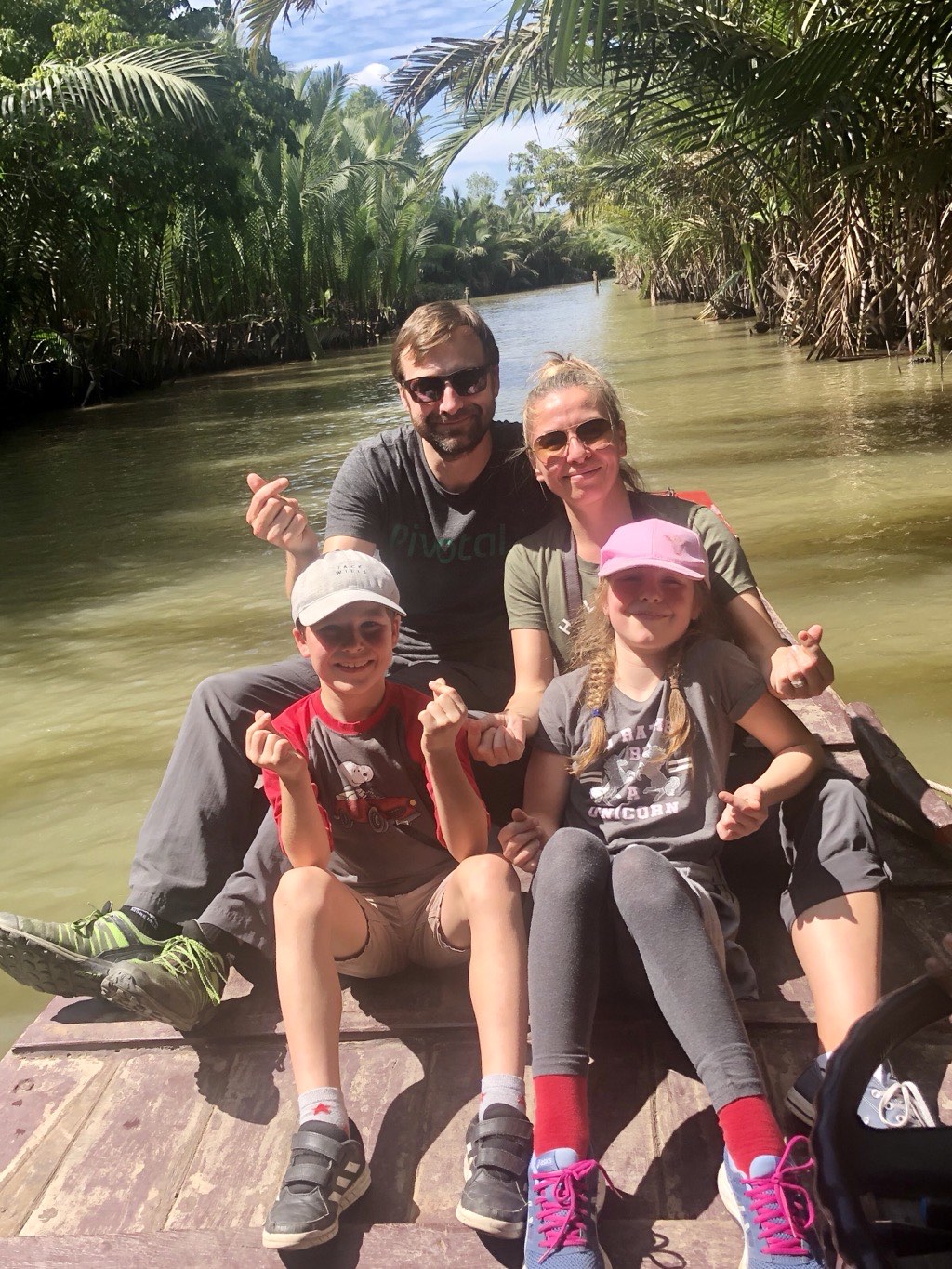 Today we visit the Mekong Delta and stay at the homestay.

After breakfast at the hotel we get onto the coach and weave through the Saturday traffic out of the city. The traffic is still pretty awful even though it’s the weekend, mainly due to the large number of cars in HCMC.

After three hours travelling and a coffee and ice cream stop, we arrive at the Mekong river and board a boat with a local guide who’s going to show us around.

Coconuts are big business here and while we’re travelling along the river the guide hands out coconuts for us to drink and eat. 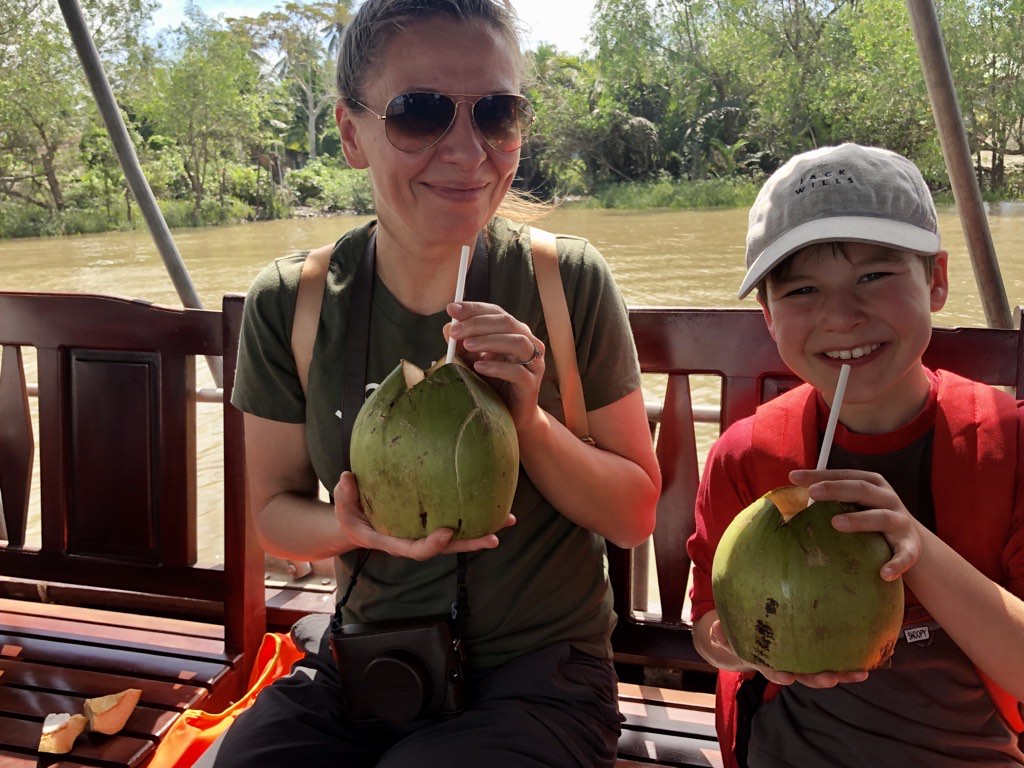 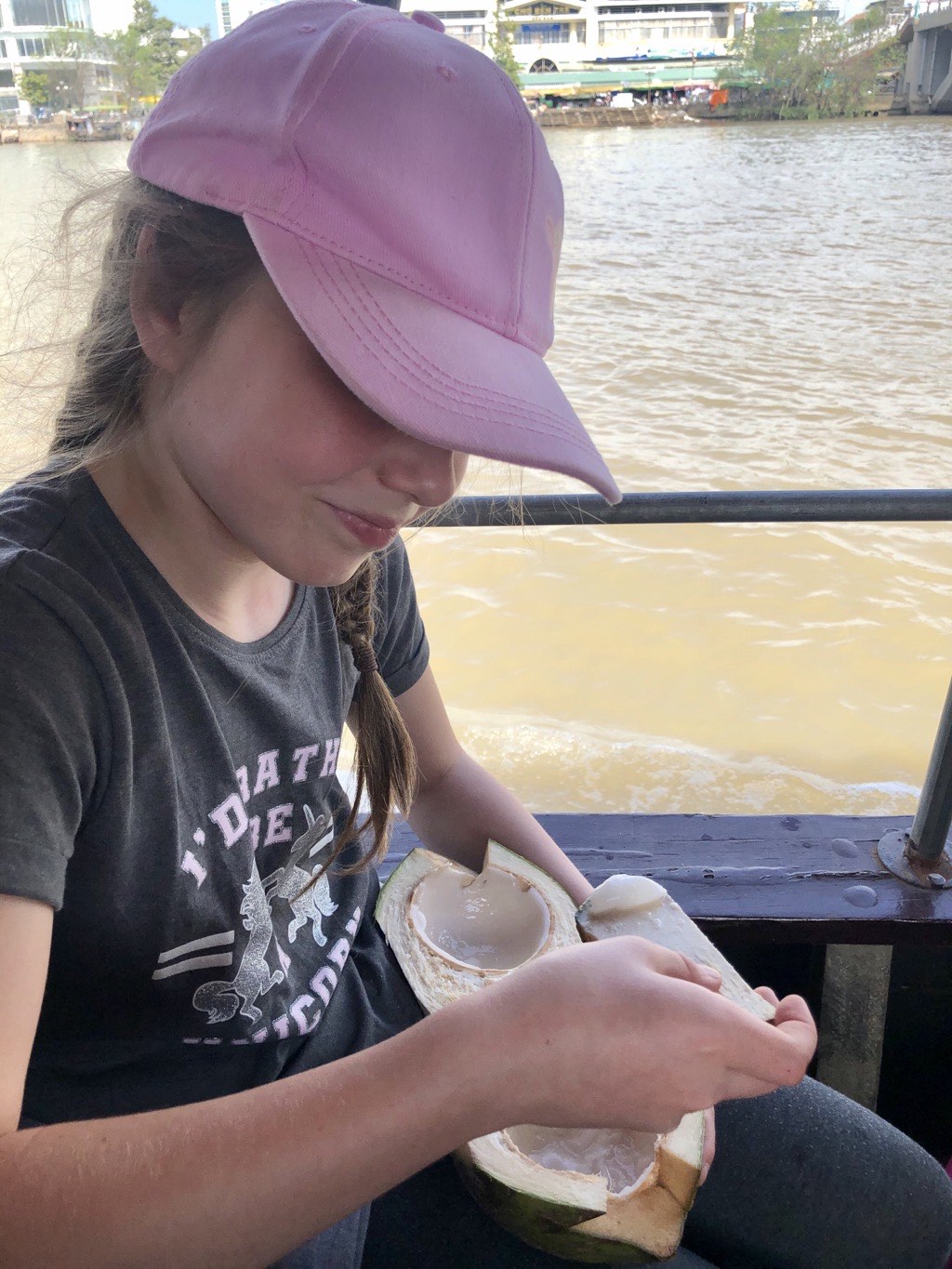 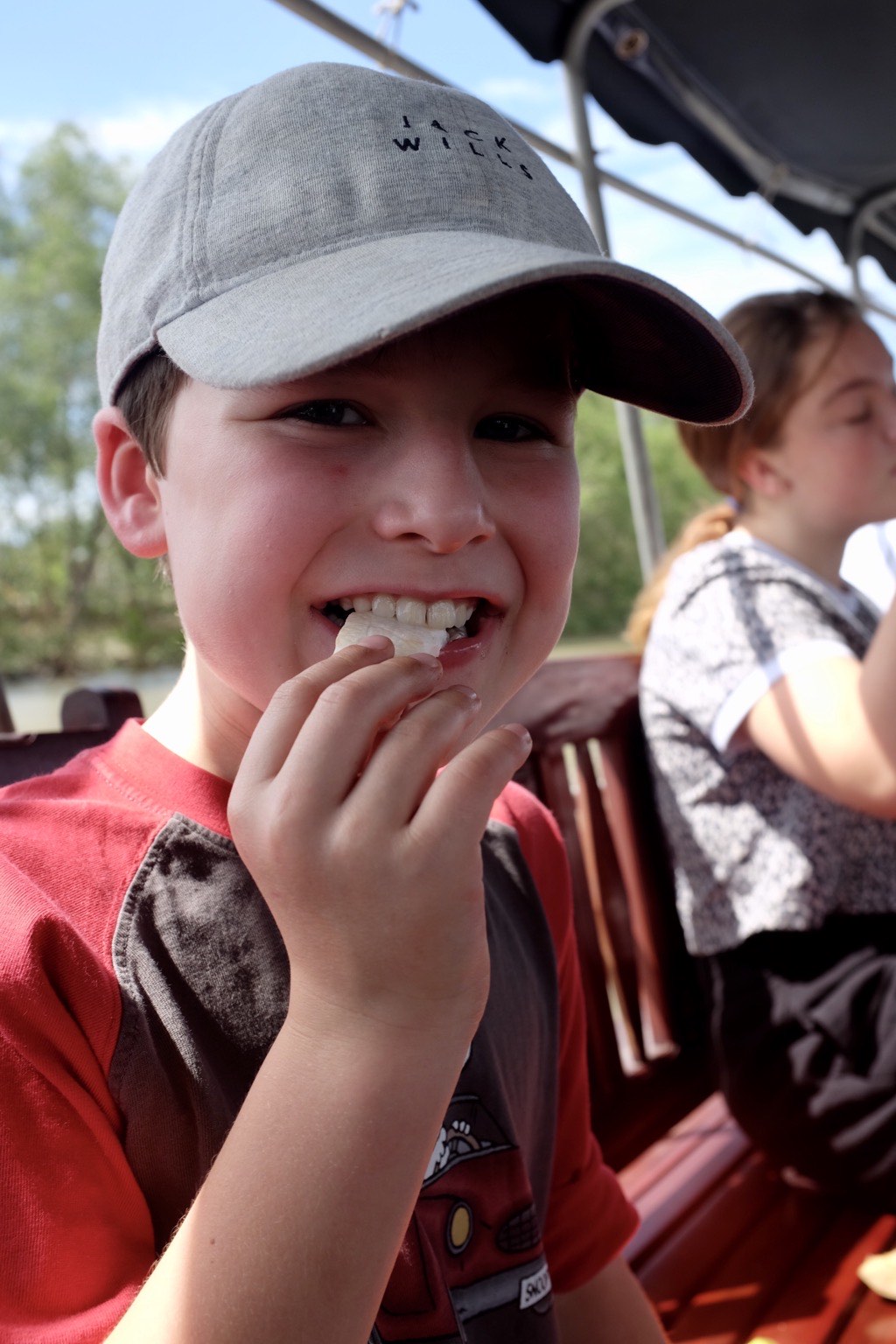 The coconut water is really refreshing although the children aren’t too keen. After we’d drank the water the guide hacked open the coconuts with a machete so that we could eat the flesh which the children loved. 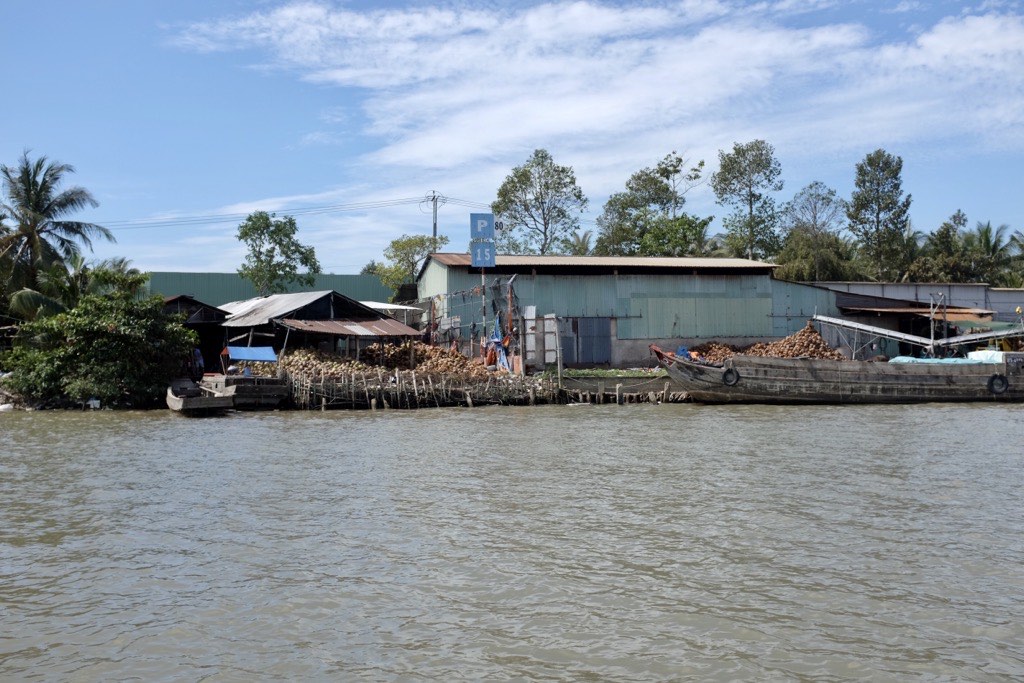 After 30 minutes on the river we arrived at the Coconut Workshop where they process coconuts and make various coconut products.

Vietnam is the 6th largest producer of coconut worldwide and the majority come from the Mekong delta. Coconut palms are everywhere!

The worker’s at the workshop are paid by the piece so they’re working pretty swiftly. 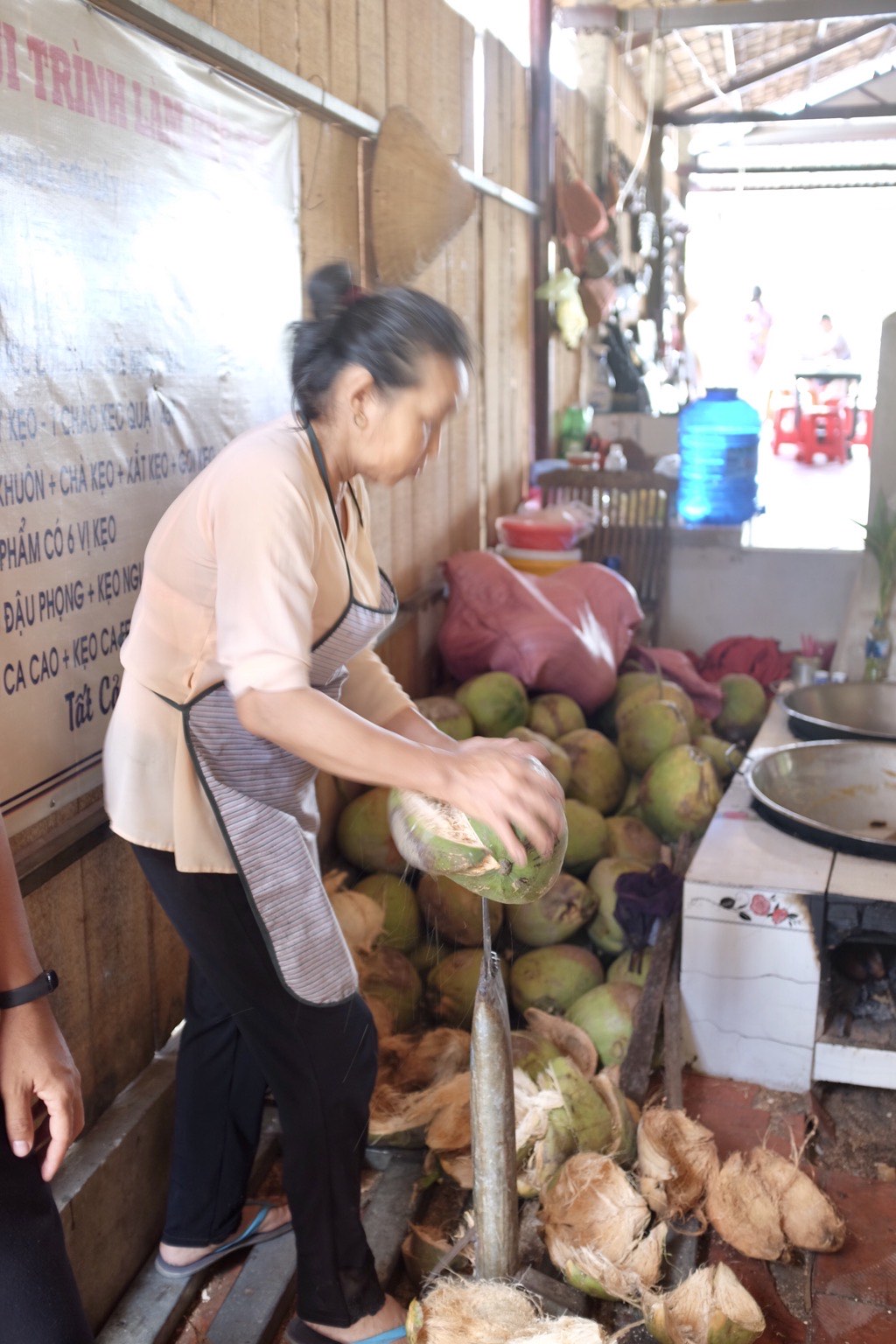 The first step is to de-husk the coconut using a large metal spike. You really need to keep your wits about you when working at this station!

Nothing is wasted and the husk is dried and then used as fuel. 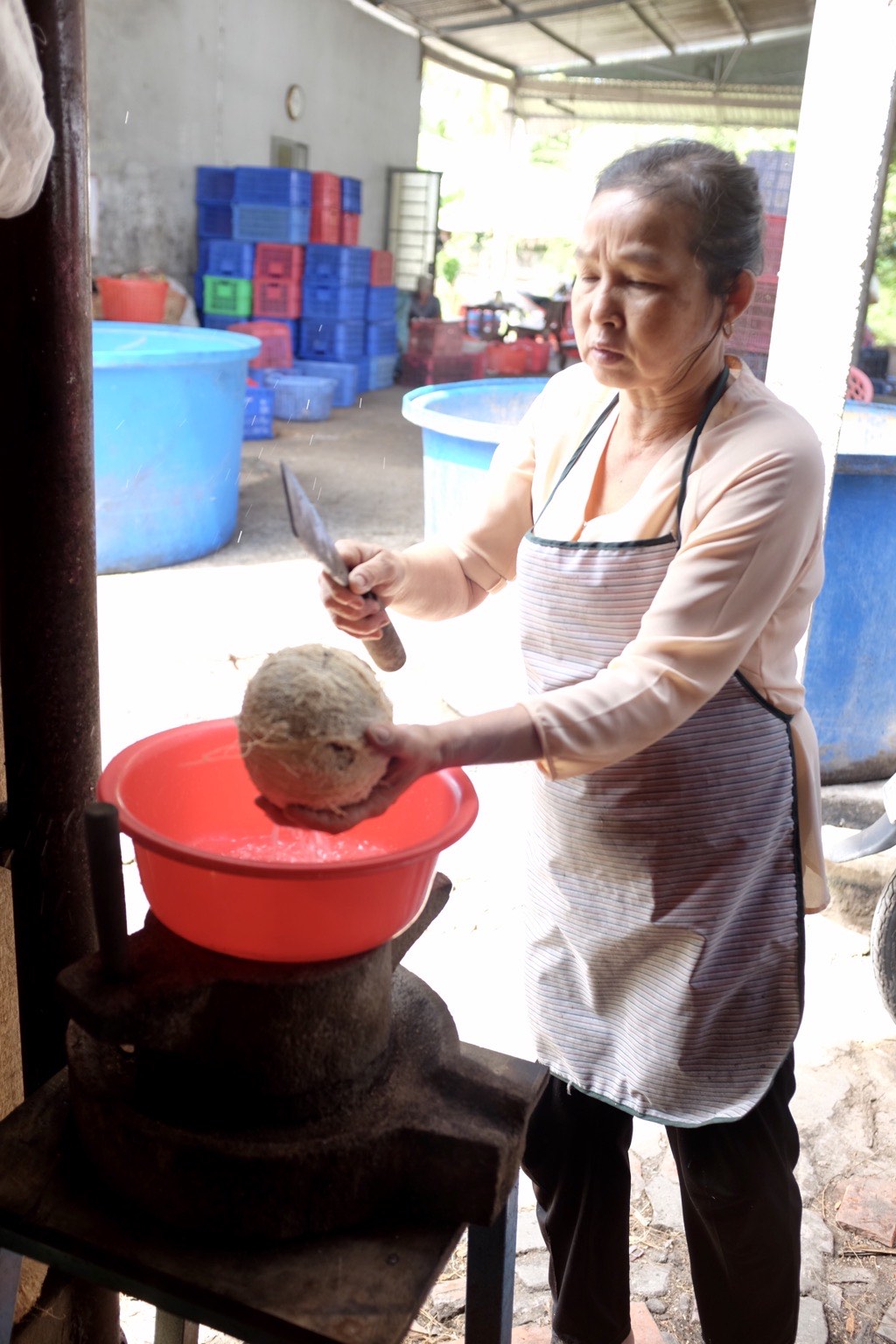 Once the husk has been removed the coconut is drained and the water is kept to make into products, coconut wine, syrup or just as it is. 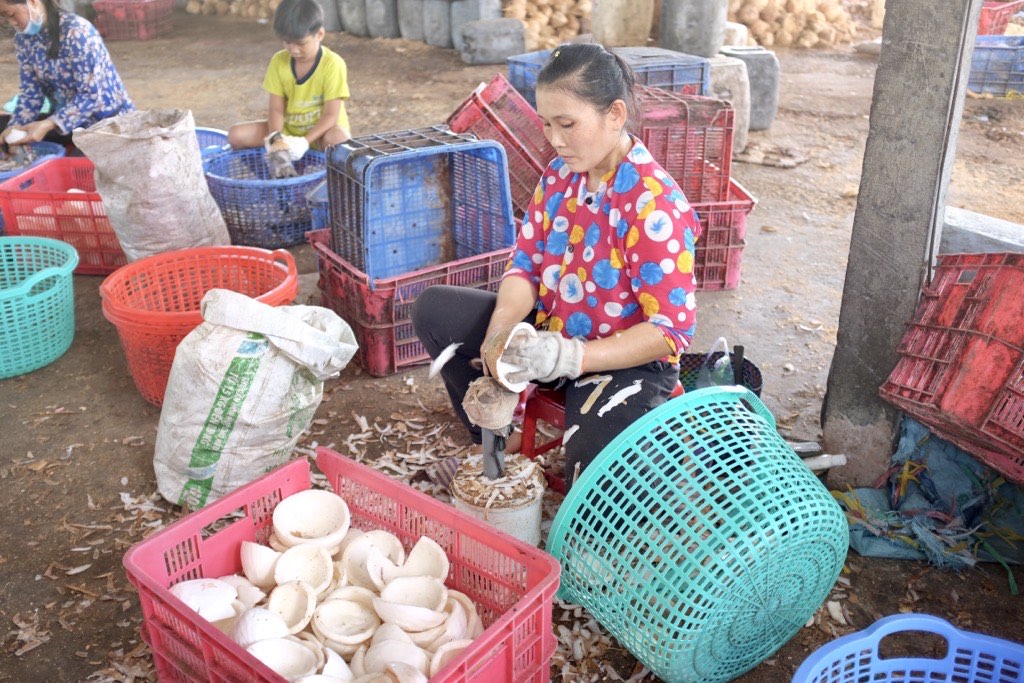 This lady was working really quickly, I can’t imagine how she keeps this pace all day. 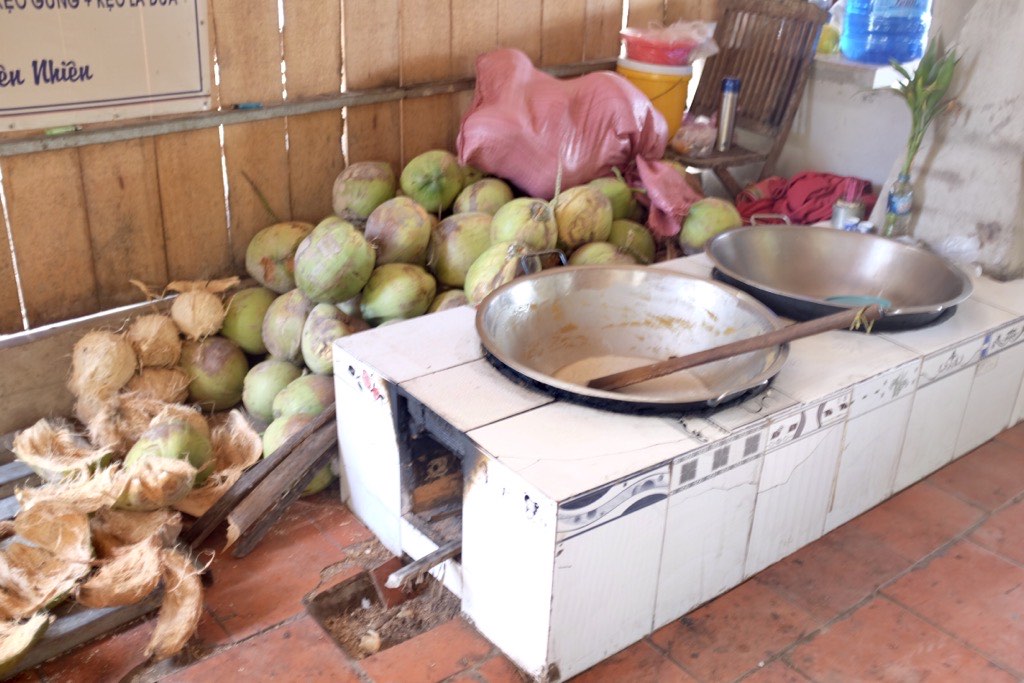 Some of the coconut milk is boiled with sugar and molasses to create sweets. 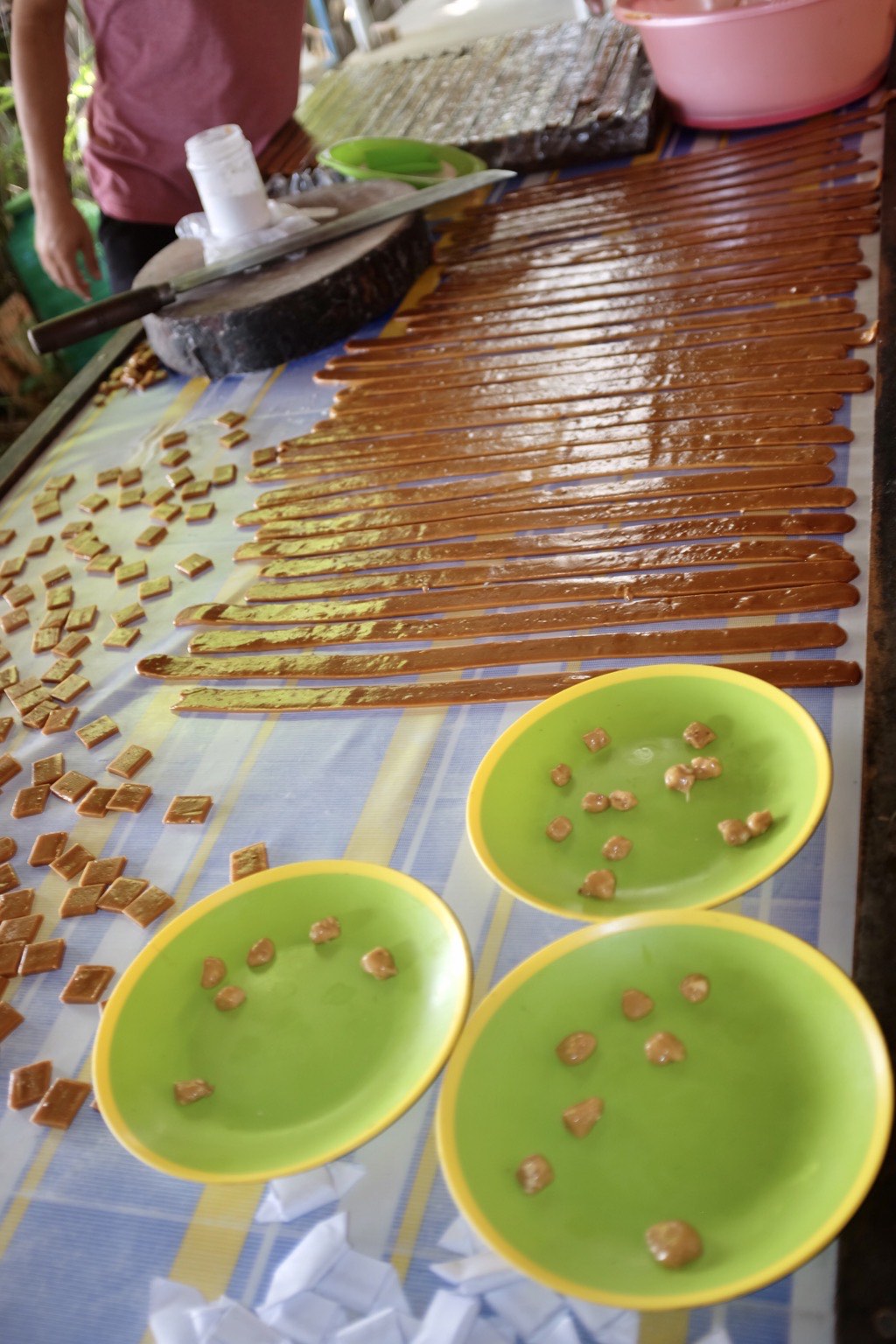 The toffee mixture is cooled, shaped, cut and wrapped. We try some of the sweets and they are delicious and we buy some at the gift shop. 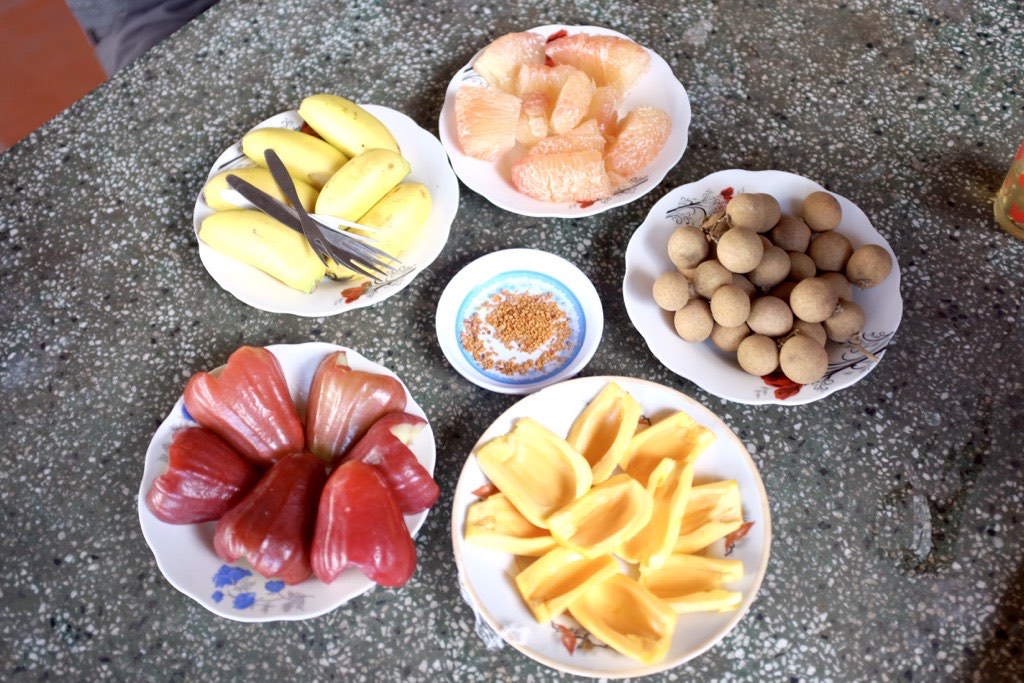 After the tour of the workshop we sat down for a snack of fruit and banana leaf tea with honey. We sampled pomelo, Rose apple, jackfruit, lychees and mini bananas all served with chilli salt. The pomelo was sweet and delicious, far better than any we’ve had at home. 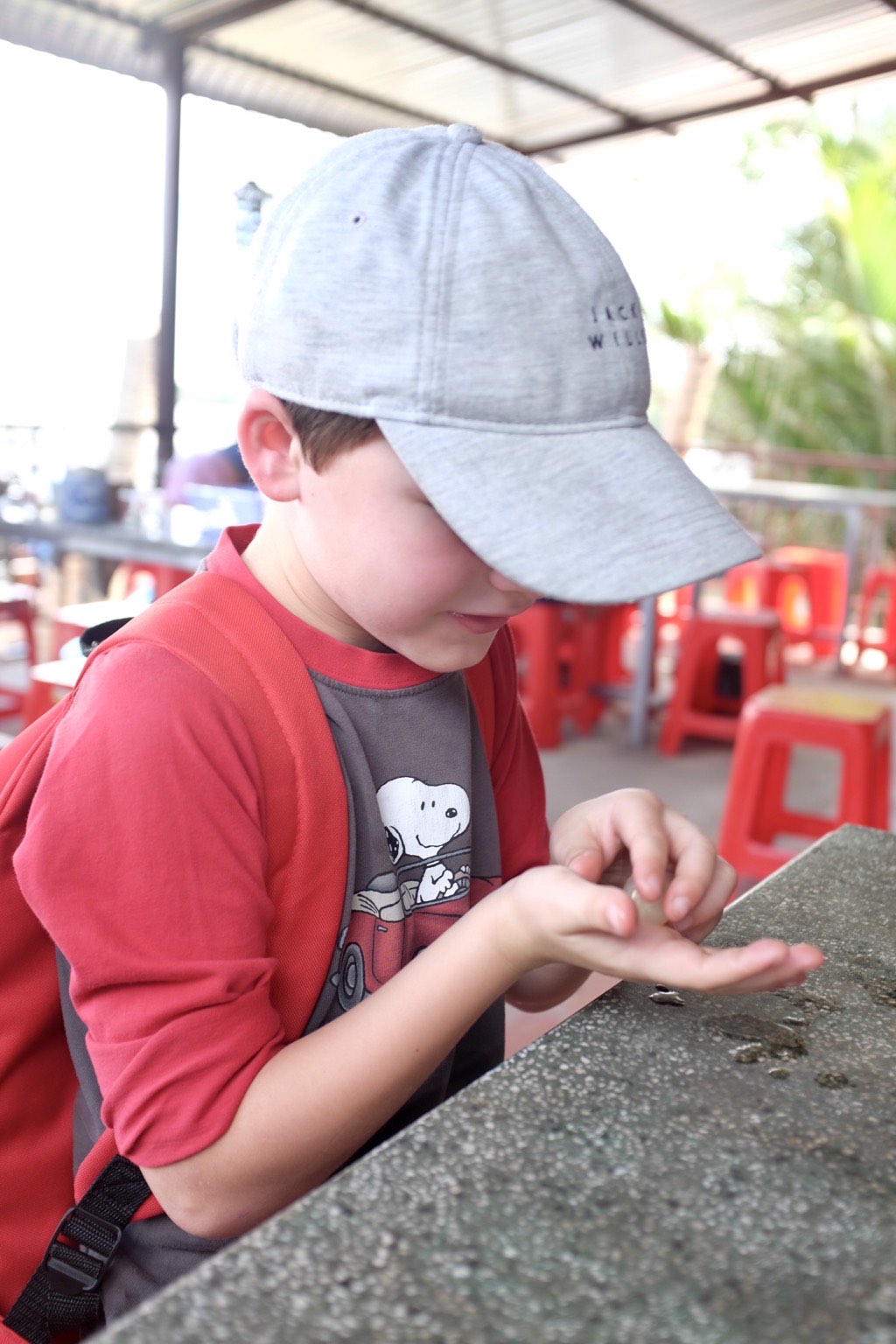 The kids weren’t so keen on the lychees or ‘eye balls’ as they called them. 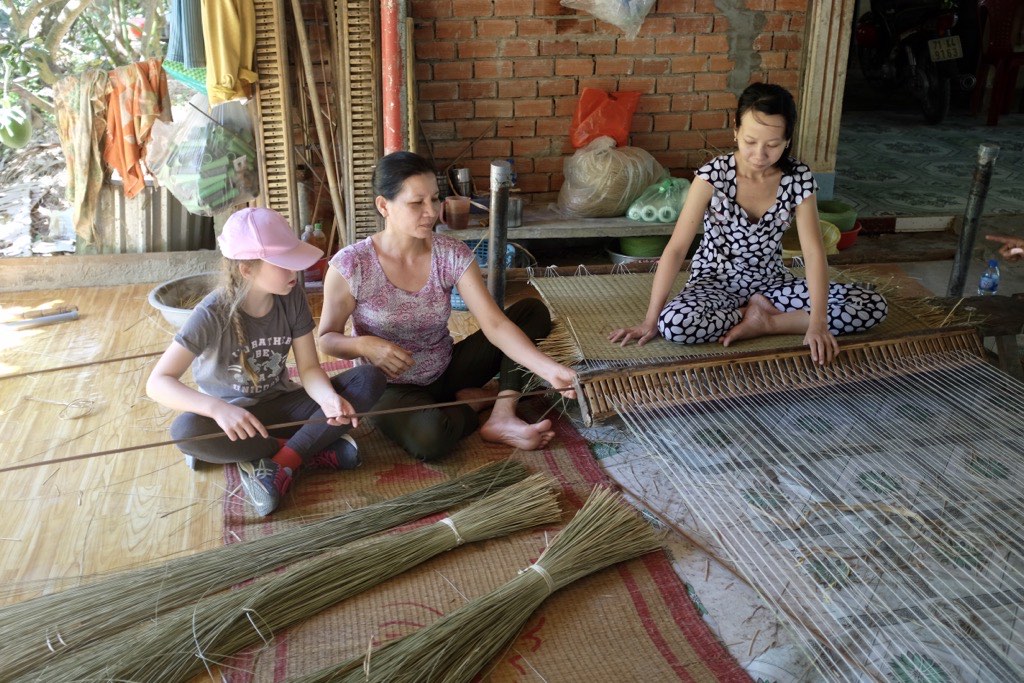 We jump back on the boat for a short ride and then take a look at grass mats being made. Bella gets to try it out which she enjoyed.

This family make six mats a day and have been making them for generations. There aren’t many families left who still make them due to competition from cheaper plastic mats unfortunately as these are much more ecologically sound. 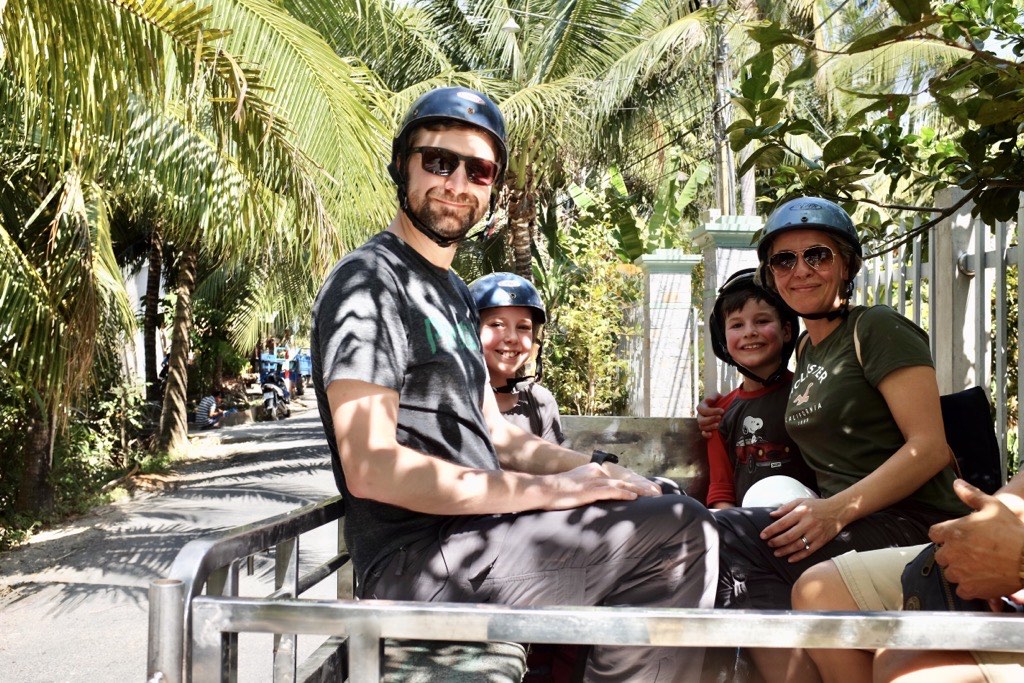 Afterwards we ride to lunch in a Tuk Tuk which was great fun but spine shattering on the bumps as there’s no suspension!

Lunch is in a family restaurant set out of the way and we have a private dining area which is really nice and has a welcome cool breeze. 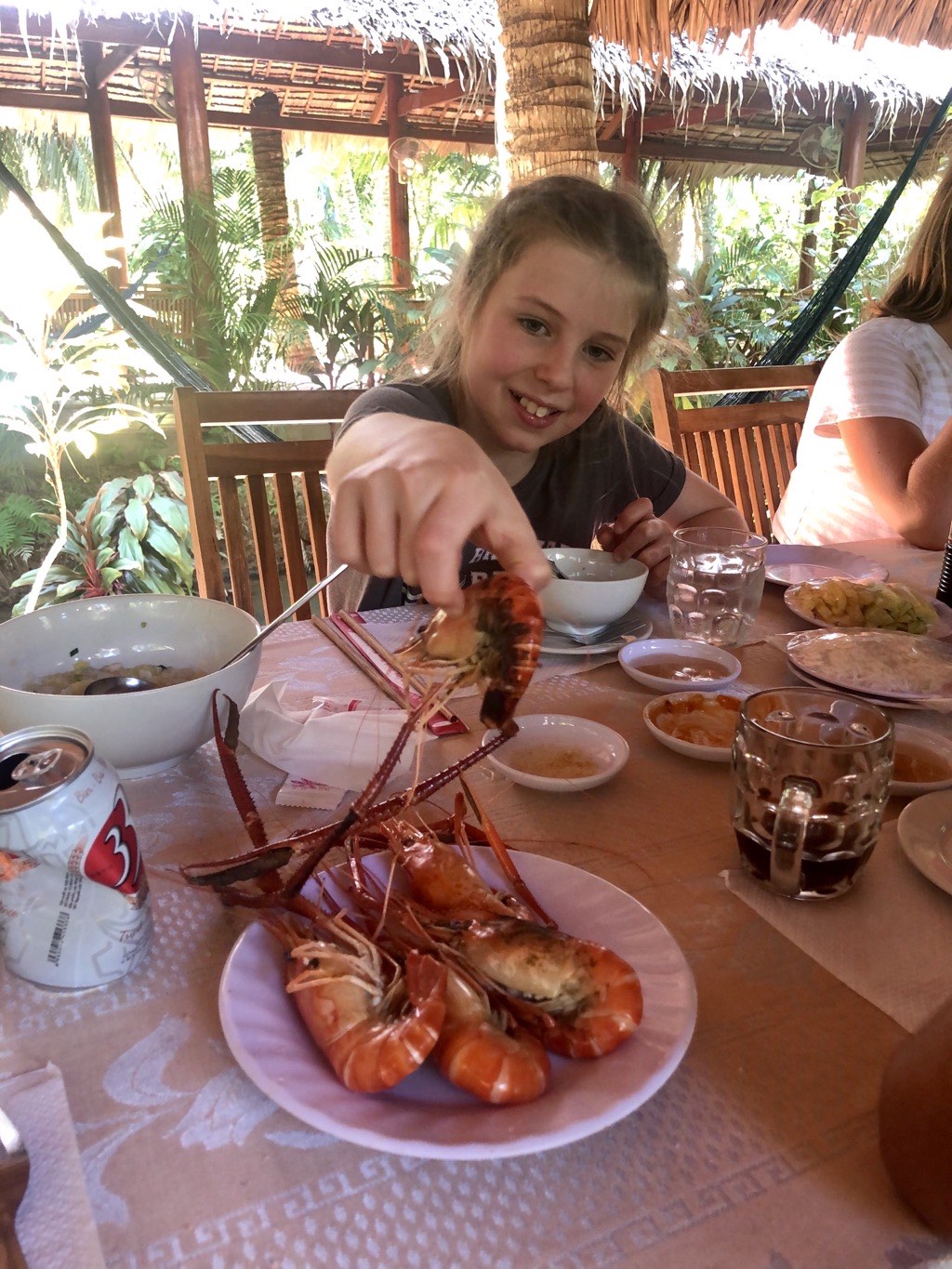 We’re all impressed with the huge prawns which are super tasty. 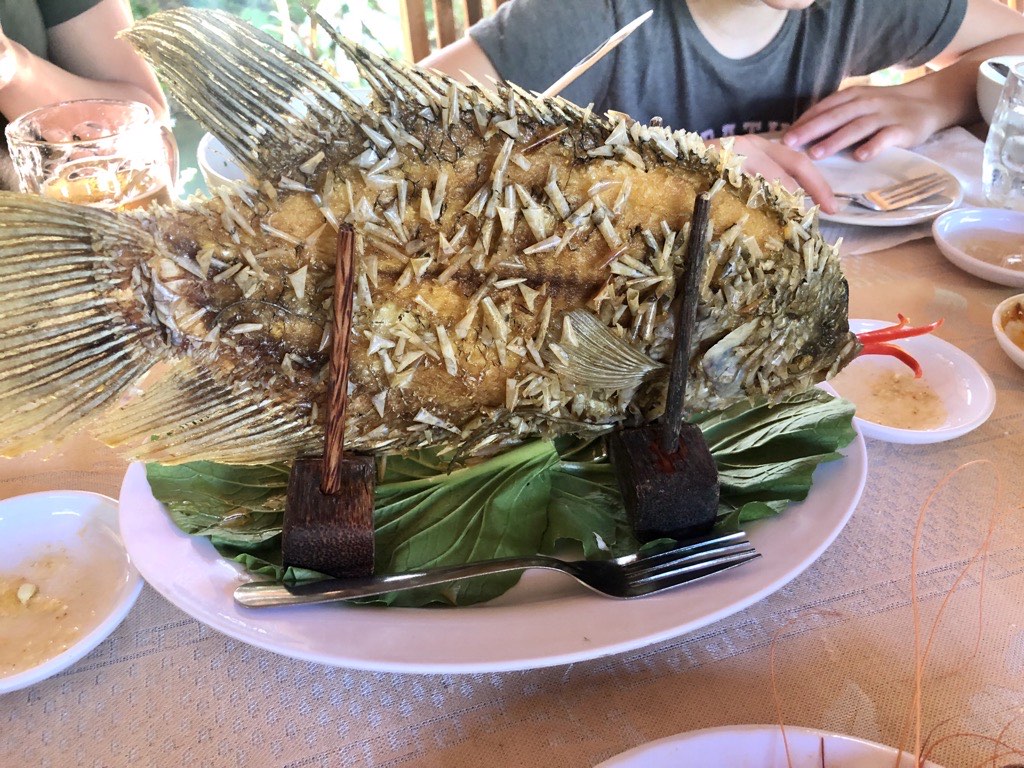 But we’re then blown away by the main course of elephant ear fish. It’s been deep fried whole with the scales left on and it’s one of the most succulent and delicious fish’s we’ve ever eaten.

Next up it’s a short Tuk Tuk ride back to the coach and another 30 minutes travel to the homestay. The coach drops us at the main road and we then walk for 15 minutes along a narrow back street and then a small dirt path until we reach the homestay right on the river front. 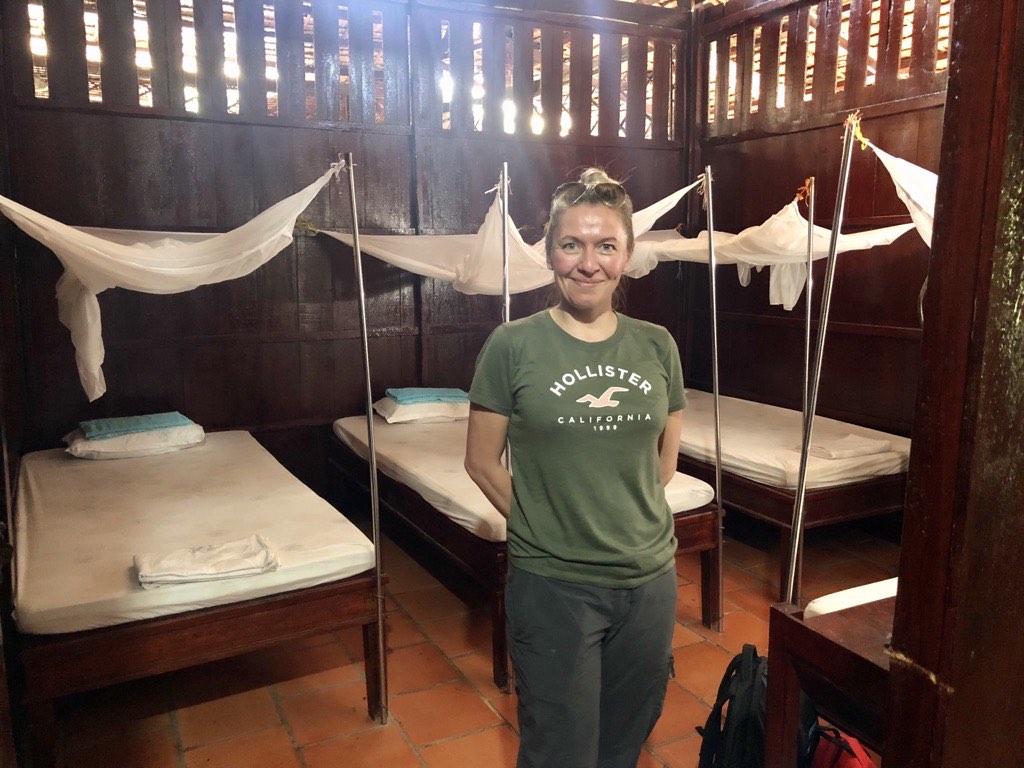 I’ve been looking forward to the homestay for the whole trip and I’m not disappointed. The house is made from coconut wood and largely open to the elements but it’s so hot and humid that that’s a good thing. 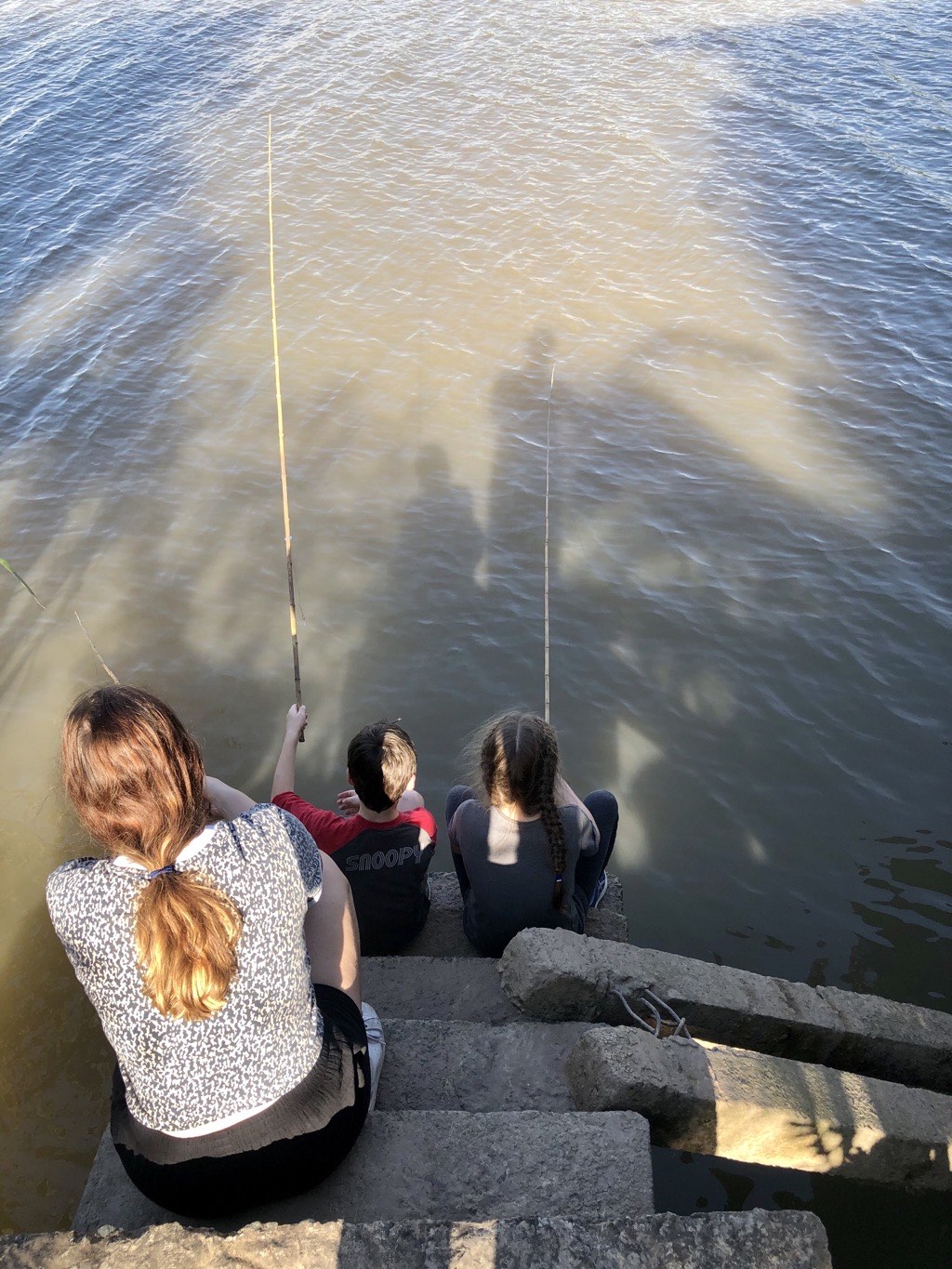 The children launched straight into fishing which they were really excited about. We started by digging in the garden to find worms for bait and then quickly caught several small fish each. 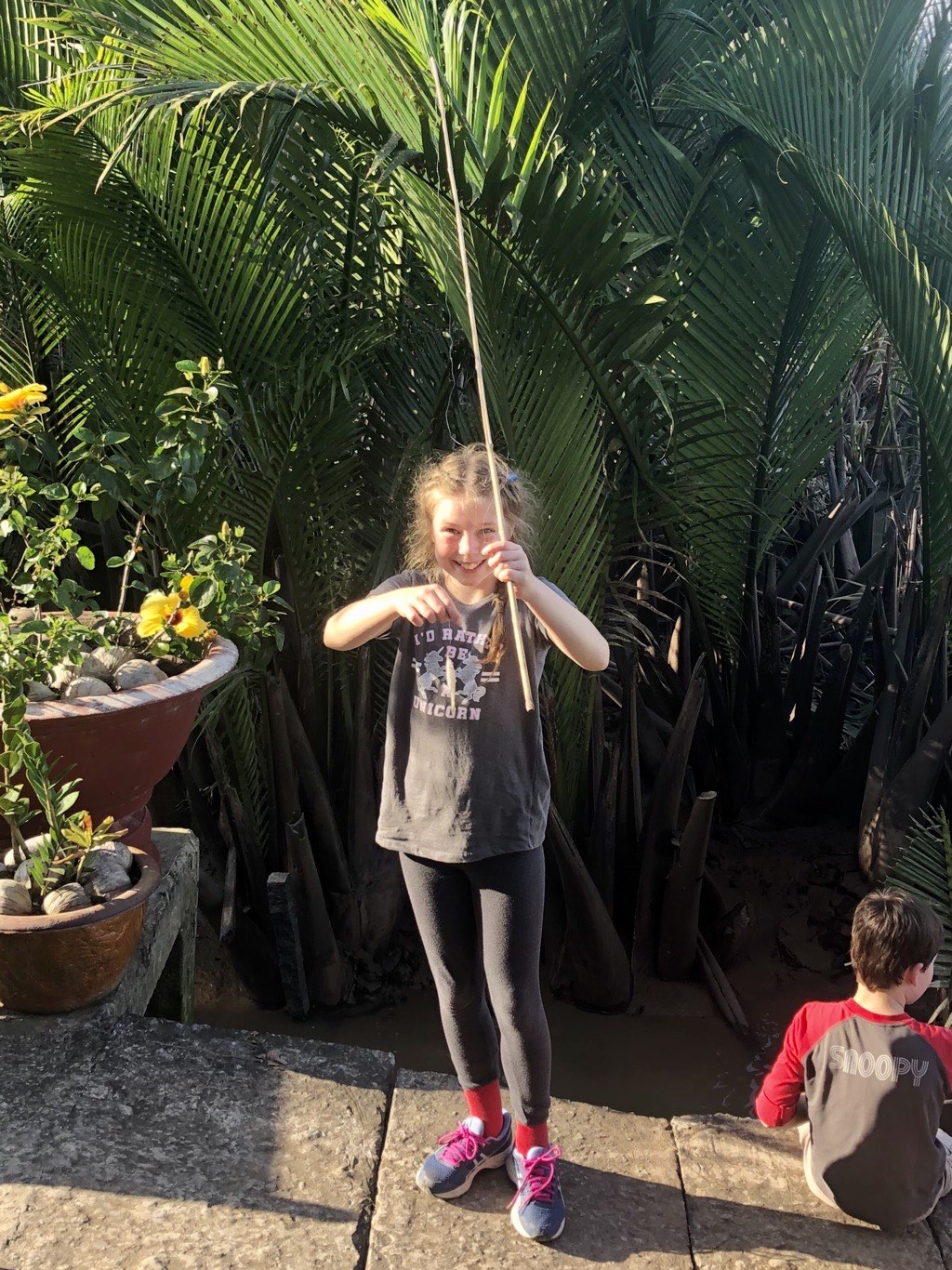 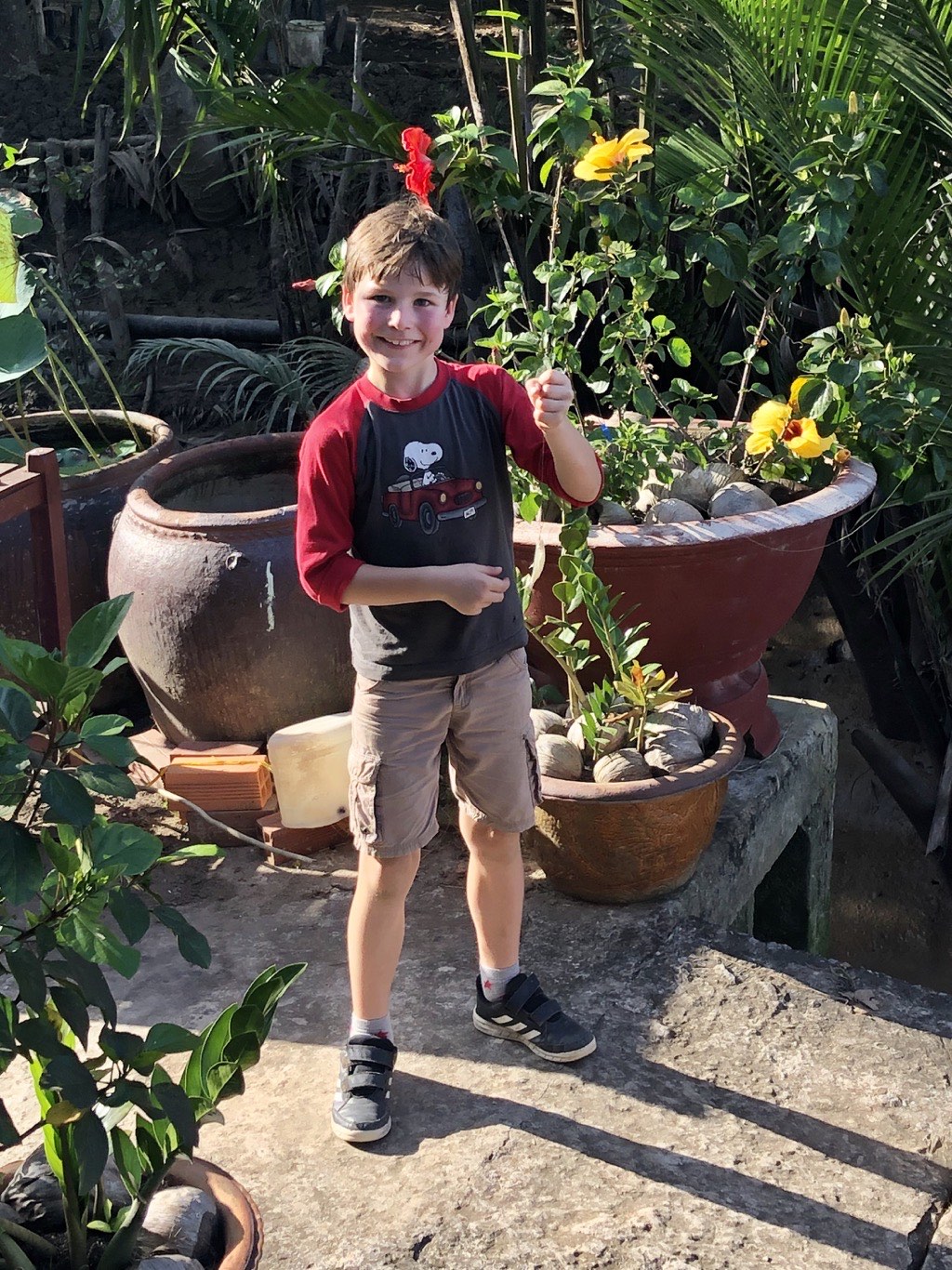 The fishing was a big hit and the children spent the next few hours trying to catch more. We caught quite a few mud hoppers but they kept jumping out of the bucket and escaping. 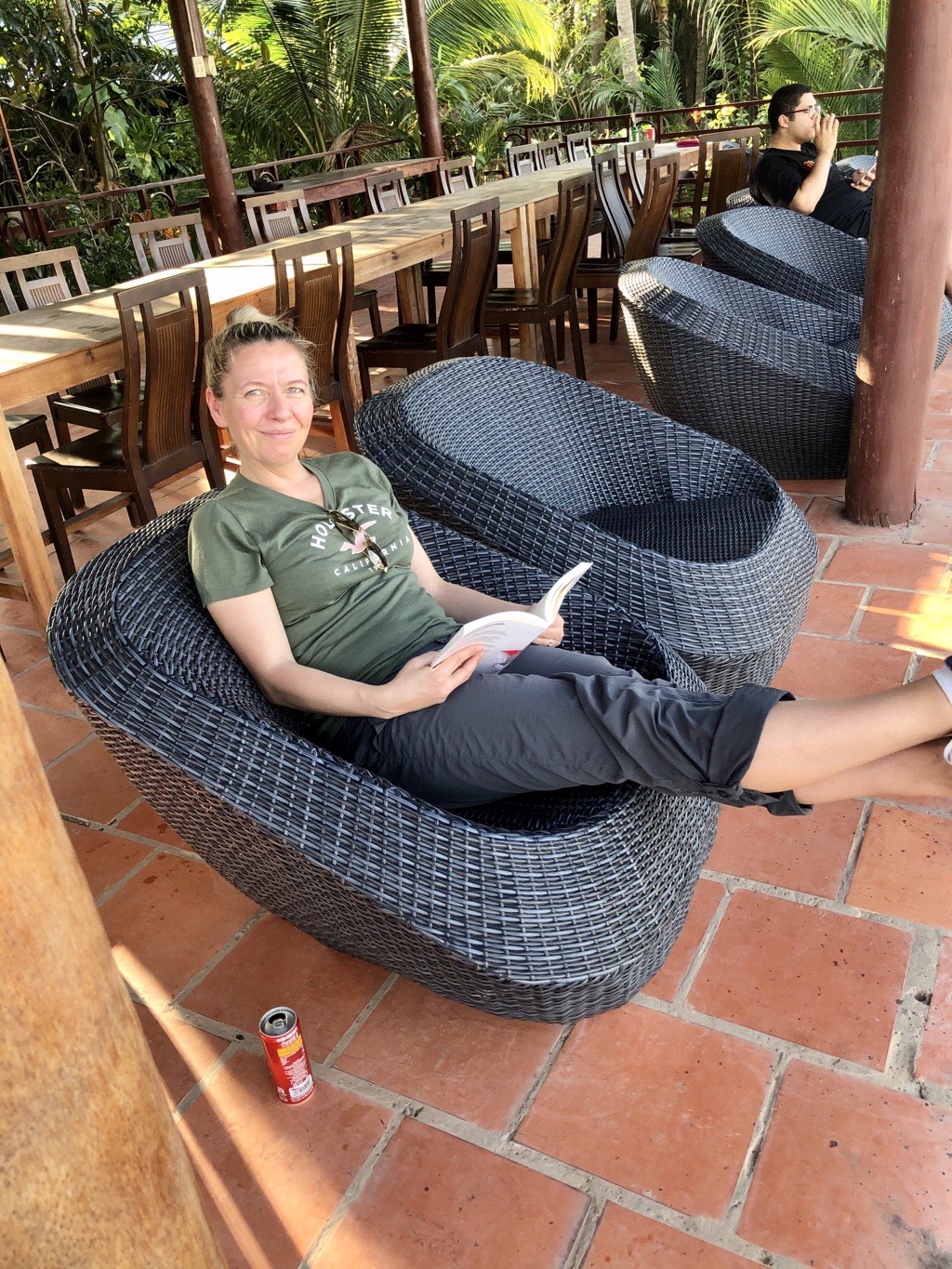 After fishing we all had some free time, the adults read on the terrace overlooking the river and the children relaxed in the hammocks and played darts. 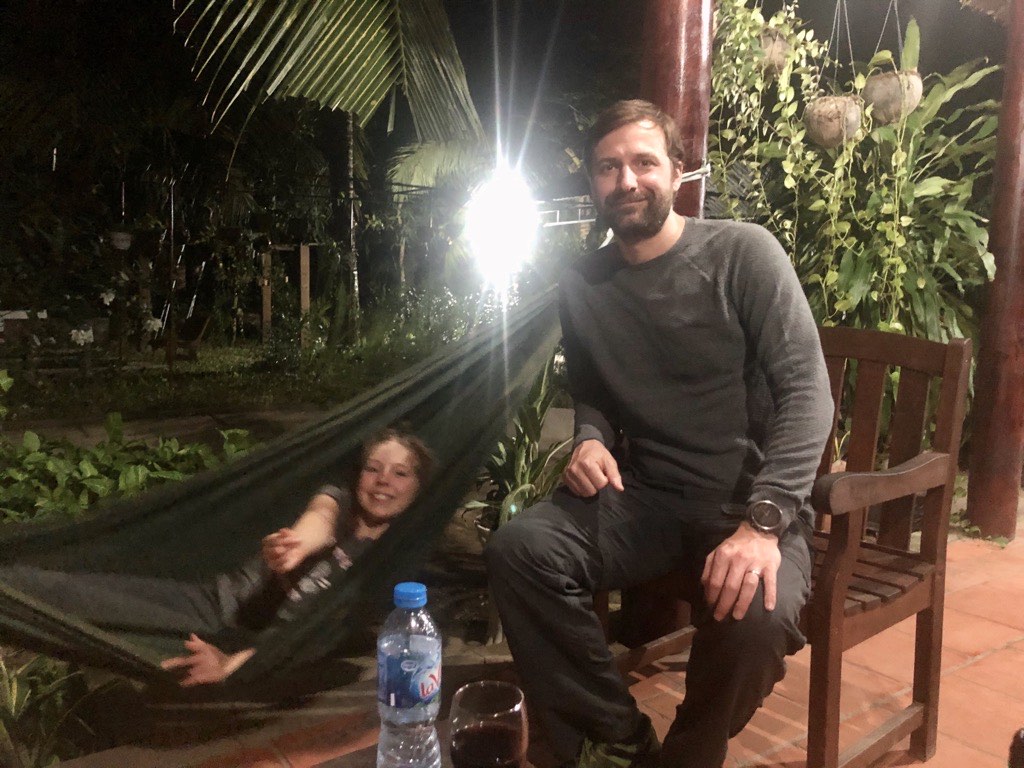 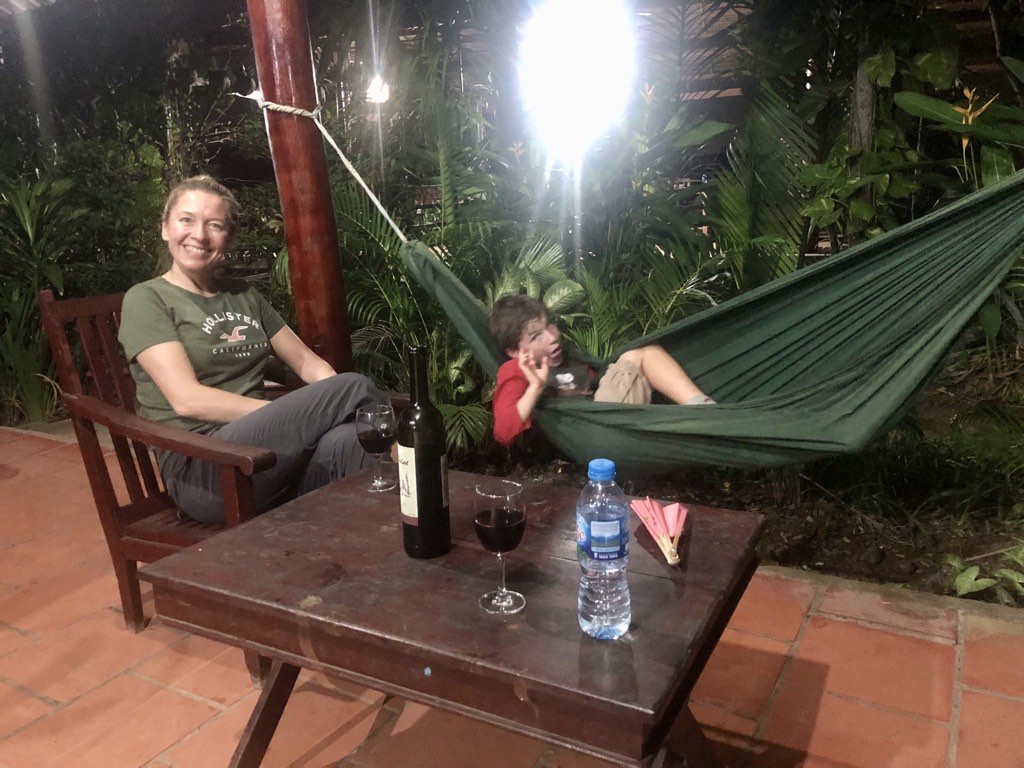 Mrs Mai made us a typical dinner and roped the kids into making the spring rolls. 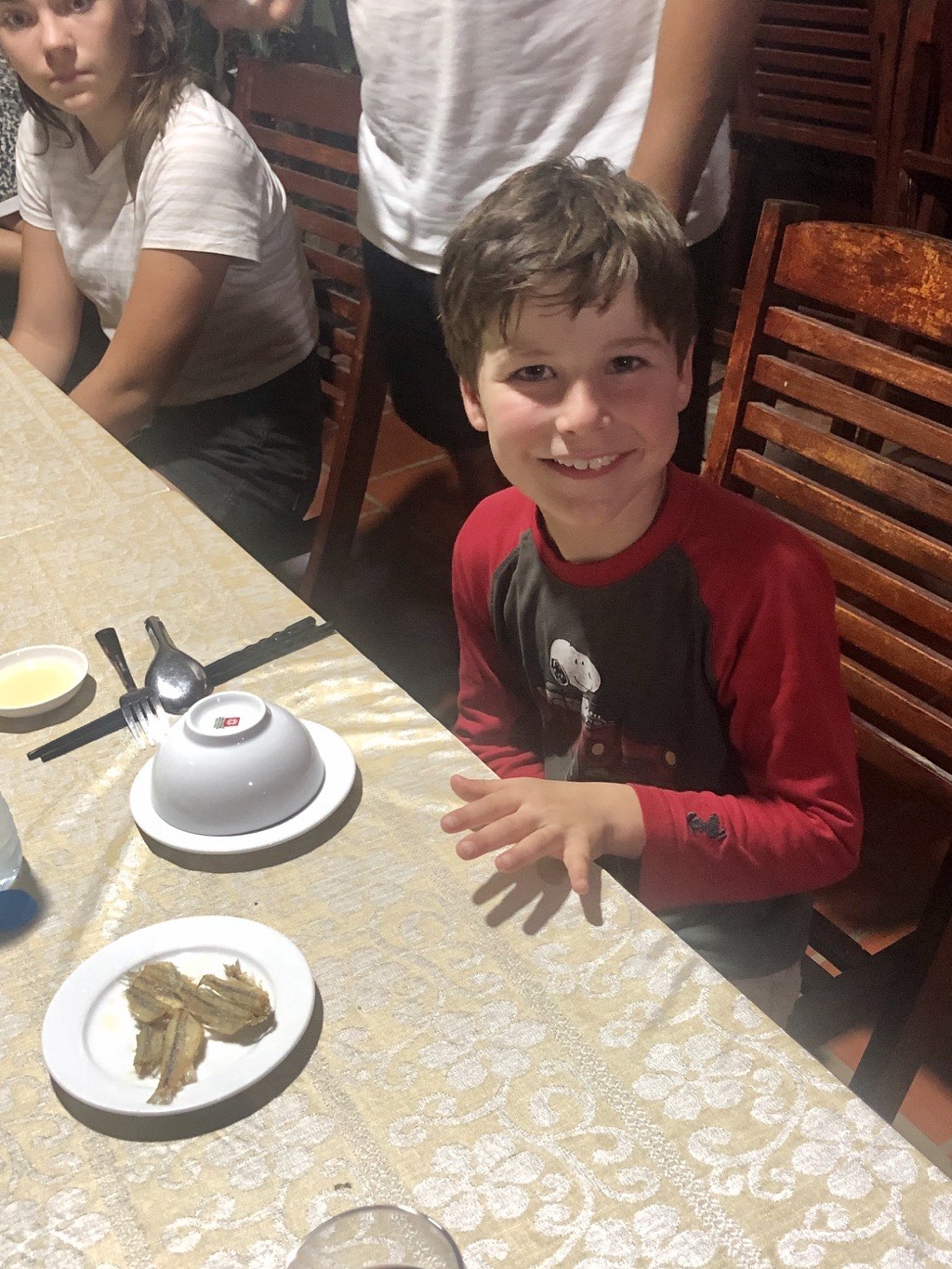 She even cooked the fish the children had caught which they loved. 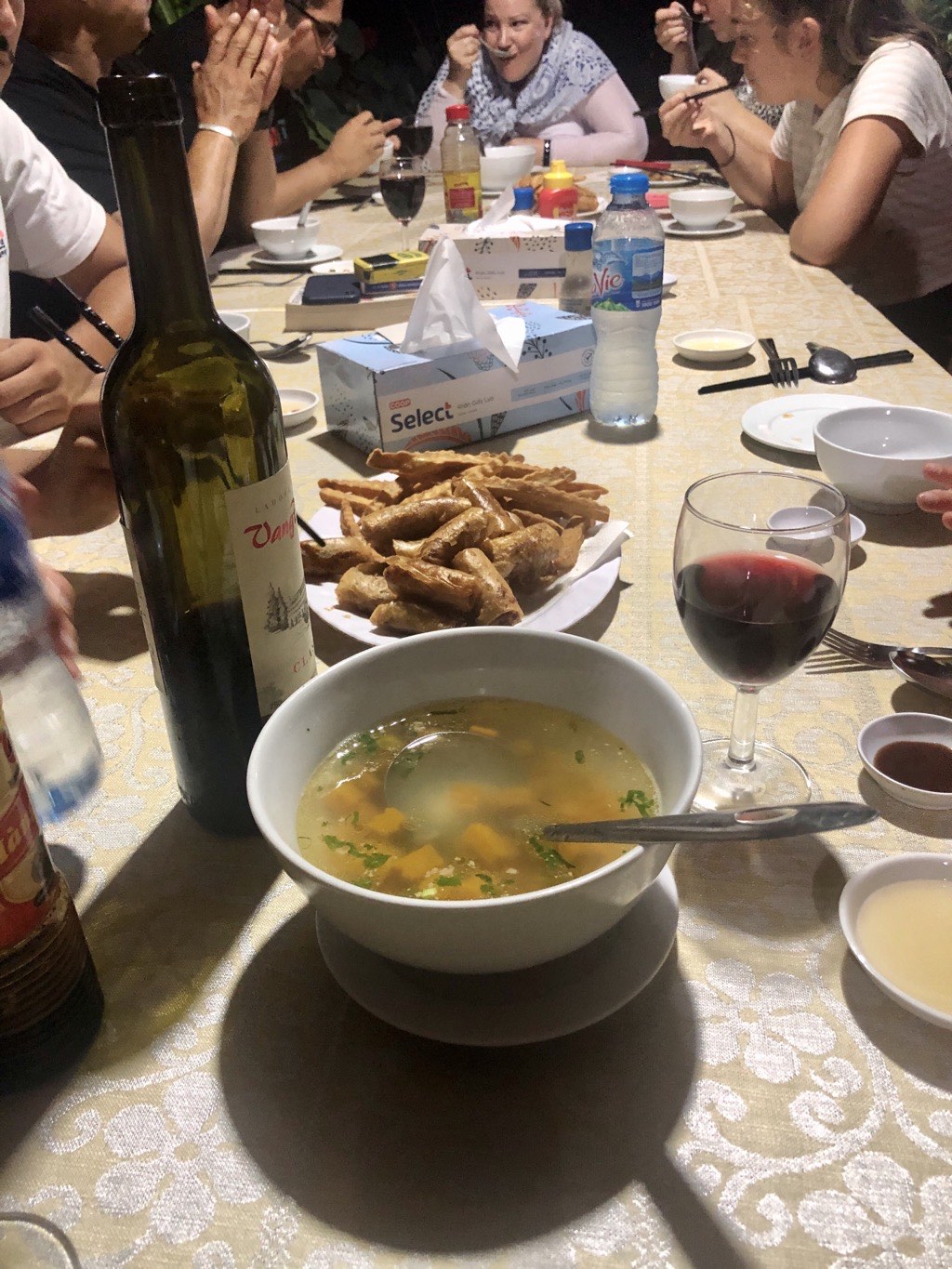 Dinner was pumpkin soup followed by spring rolls and cassava chips, tofu with noodles and slow cooked pork in coconut milk. All really typical and tasty. Diana and I shared a bottle of chilled Vietnamese red wine which was the perfect accompaniment.

After dinner we had coconut leaf tea on the terrace and headed for bed. 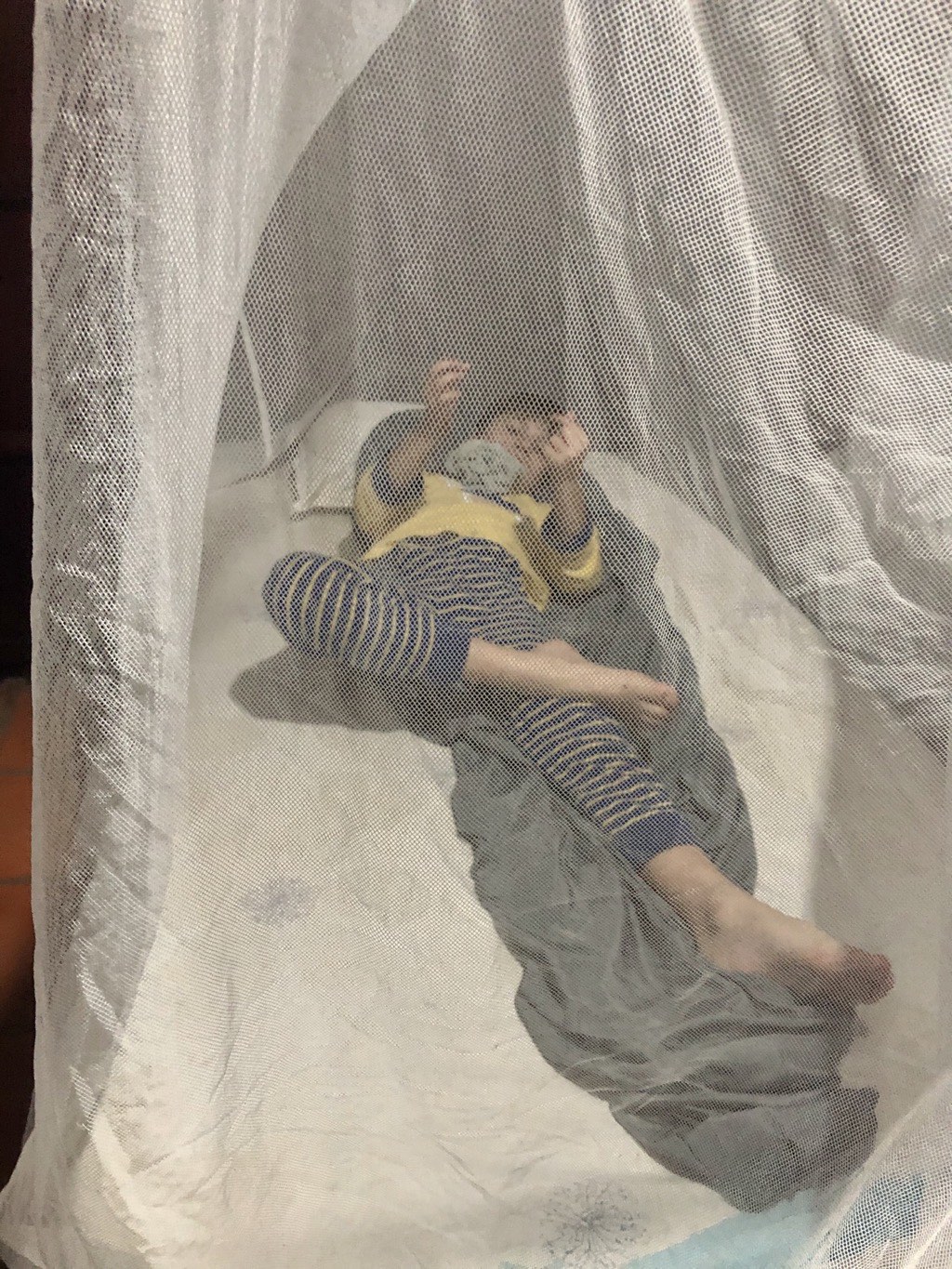 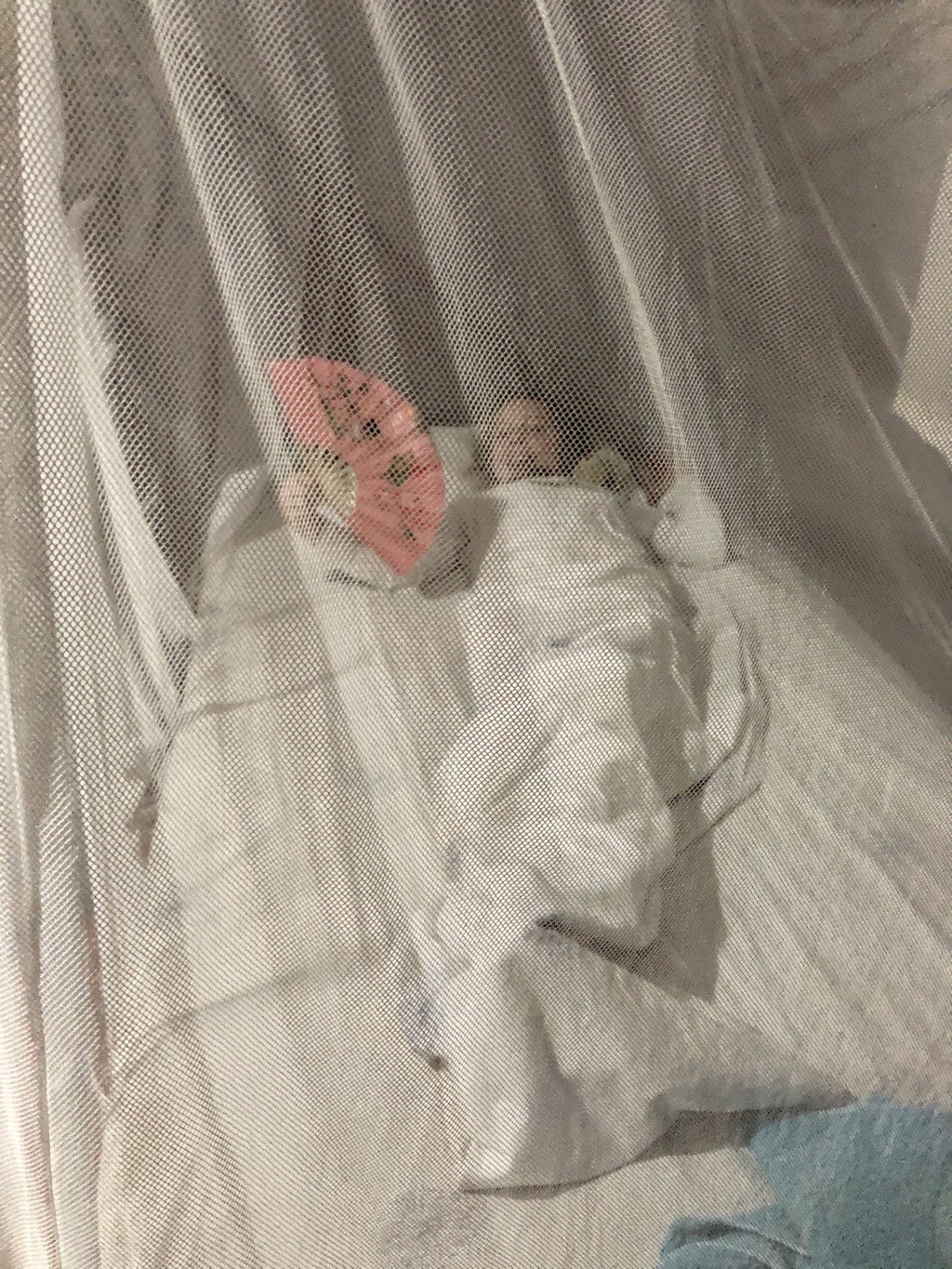 It was still really hot and humid and we fell asleep with the fans on and mosquito nets down!